“Gamow was fantastic in his ideas. He was right, he was wrong. More often wrong than right. Always interesting; … and when his idea was not wrong it was not only right, it was new.” -Edward Teller

100 years ago, our conception of the Universe was so small it's almost laughable. We still were mired in Newtonian thought, conceiving only of the stars within our own Milky Way, with a Universe that was perceived as static and unchanging, and where the stars which made it up perhaps even lived forever. Yet today, we have a Universe that's expanding, cooling, full of dark matter and dark energy, and had a birthday 13.8 billion years ago: the Big Bang. 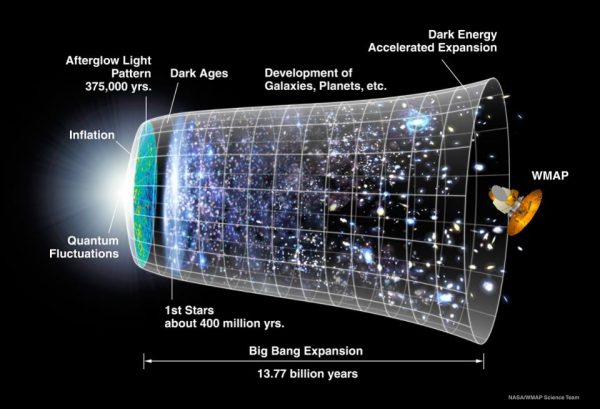 The timeline of our observable Universe's history, where the observable portion expands to larger and larger sizes as we move forward in time away from the Big Bang. Image credit: NASA / WMAP science team.

More than that, we've been able to determine exactly how big the Universe is, where it came from, what happened before the Big Bang, and what its fate is today. We know how the elements were formed, how the stars live and die, what the Universe looks like on the largest scales, and how it got to be the way it is today.

The fluctuations in the Cosmic Microwave Background were first measured accurately by COBE in the 1990s, then more accurately by WMAP in the 2000s and Planck (above) in the 2010s. This image encodes a huge amount of information about the early Universe. Image credit: ESA and the Planck collaboration.

How did this happen? One step of scientific investigation at a time! Here are the biggest jumps forward in each decade, going back 100 years.

Ethan Siegel wrote: "General Relativity was famed for making the explanation that Newton’s gravity couldn’t: the precession of Mercury’s orbit around the Sun."

"The objective of curve fitting is to theoretically describe experimental data with a model (function or equation) and to find the parameters associated with this model. Models of primary importance to us are mechanistic models. Mechanistic models are specifically formulated to provide insight into a chemical, biological, or physical process that is thought to govern the phenomenon under study. Parameters derived from mechanistic models are quantitative estimates of real system properties (rate constants, dissociation constants, catalytic velocities etc.). It is important to distinguish mechanistic models from empirical models that are mathematical functions formulated to fit a particular curve but whose parameters do not necessarily correspond to a biological, chemical or physical property."

Here Michel Janssen describes the anti-deductive approach of Einstein and his mathematical friends - endlessly "adjusting the model" until "excellent agreement with observation" is reached:

Michel Janssen: "But - as we know from a letter to his friend Conrad Habicht of December 24, 1907 - one of the goals that Einstein set himself early on, was to use his new theory of gravity, whatever it might turn out to be, to explain the discrepancy between the observed motion of the perihelion of the planet Mercury and the motion predicted on the basis of Newtonian gravitational theory. [...] The Einstein-Grossmann theory - also known as the "Entwurf" ("outline") theory after the title of Einstein and Grossmann's paper - is, in fact, already very close to the version of general relativity published in November 1915 and constitutes an enormous advance over Einstein's first attempt at a generalized theory of relativity and theory of gravitation published in 1912. The crucial breakthrough had been that Einstein had recognized that the gravitational field - or, as we would now say, the inertio-gravitational field - should not be described by a variable speed of light as he had attempted in 1912, but by the so-called metric tensor field. The metric tensor is a mathematical object of 16 components, 10 of which independent, that characterizes the geometry of space and time. In this way, gravity is no longer a force in space and time, but part of the fabric of space and time itself: gravity is part of the inertio-gravitational field. Einstein had turned to Grossmann for help with the difficult and unfamiliar mathematics needed to formulate a theory along these lines. [...] Einstein did not give up the Einstein-Grossmann theory once he had established that it could not fully explain the Mercury anomaly. He continued to work on the theory and never even mentioned the disappointing result of his work with Besso in print. So Einstein did not do what the influential philosopher Sir Karl Popper claimed all good scientists do: once they have found an empirical refutation of their theory, they abandon that theory and go back to the drawing board. [...] On November 4, 1915, he presented a paper to the Berlin Academy officially retracting the Einstein-Grossmann equations and replacing them with new ones. On November 11, a short addendum to this paper followed, once again changing his field equations. A week later, on November 18, Einstein presented the paper containing his celebrated explanation of the perihelion motion of Mercury on the basis of this new theory. Another week later he changed the field equations once more. These are the equations still used today. This last change did not affect the result for the perihelion of Mercury. Besso is not acknowledged in Einstein's paper on the perihelion problem. Apparently, Besso's help with this technical problem had not been as valuable to Einstein as his role as sounding board that had earned Besso the famous acknowledgment in the special relativity paper of 1905. Still, an acknowledgment would have been appropriate. After all, what Einstein had done that week in November, was simply to redo the calculation he had done with Besso in June 1913, using his new field equations instead of the Einstein-Grossmann equations. It is not hard to imagine Einstein's excitement when he inserted the numbers for Mercury into the new expression he found and the result was 43", in excellent agreement with observation."

In a world different from Einstein's schizophrenic world Henry Hill would be a famous scientist:

Quote: "After He Said Einstein Was Wrong, Physicist Henry Hill Learned That Fame's Benefits Are Relative [...] A major proof of Einstein's theory involved a peculiarity in the planet Mercury's orbit, which he attributed to the distortion of space created by the great mass of the sun. Central to the proof was an assumption that the sun is perfectly spherical. But Hill's observations showed that the sun is not perfectly round, a discrepancy that Hill has said may be "Achilles tendon of the general theory."

George Orwell: "Withers, however, was already an unperson. He did not exist : he had never existed."

Why are you lying, Ethan? You could be at least as honest as Sabine Hossenfelder:

Sabine Hossenfelder: "As light carries energy and is thus subject of gravitational attraction, a ray of light passing by a massive body should be slightly bent towards it. This is so both in Newton's theory of gravity and in Einstein's, but Einstein's deflection is by a factor two larger than Newton's. [...] As history has it, Eddington's original data actually wasn't good enough to make that claim with certainty. His measurements had huge error bars due to bad weather and he also might have cherry-picked his data because he liked Einstein's theory a little too much. Shame on him."

Related note: ignoring science deniers like PV is getting difficult.

A slightly off topic question, but has anyone seen the series 'Genius' about Einstein and if so was it any good? I'm planning to download it since it got nominated for a couple of Emmys but I'm a bit skeptical about biopics.

I have not seen it, but three of the people I teach with have seen it and their reviews were all quite favorable.

I watched 2 episodes. It's ok. The cast is good and production as well. The focus is on his personality, life, relations etc. not on his scientific work so much. It's a bit like Milos Forman's Amadeus.

I guess I'll have to take a look myself.

I agree. But in one sentence, PV criticizes Einstein for not giving up on a discredited theory, but in the next criticizes him for adjusting his theory to match the data better. One wonders at the mental state of such people!

I watched 2 episodes. It’s ok. The cast is good and production as well. The focus is on his personality, life, relations etc. not on his scientific work so much.

Yeah, there is that. I think I'd rather have that than the science filtered through a bunch of writers in order to make it "understandable" in the programs.