"My dad took me out to see a meteor shower when I was a little kid, and it was scary for me because he woke me up in the middle of the night. My heart was beating; I didn't know what he wanted to do. He wouldn't tell me, and he put me in the car and we went off, and I saw all these people lying on blankets, looking up at the sky." -Steven Spielberg

The full or almost-full Moon might be one of the most familiar sights in the night sky to those of us here on Earth, but it’s also the largest natural source of light pollution we have to contend with. The peak of this year’s Perseid meteor shower meant, if all things were equal, the best time to see the highest rate of meteors would be the pre-sunrise sky of August 12.

A view of many meteors striking Earth over a long period of time, shown all at once, from the ground (left) and space (right). A visible Moon will reduce the number of meteors seen by half, and will reduce the apparent brightness of the meteors significantly. Image credit: Astronomical and geophysical observatory, Comenius University (L); NASA (from space), via Wikimedia Commons user Svdmolen (R).

But with a large gibbous Moon dominating the skies during that time, it’s actually one of the worst ways you can try and view the Perseids this year. Instead, go out when the skies are darkest: before the Moon rises just after the peak. Because of how wide the cometary debris stream that gives rise to the Perseids is, viewing the sky in the evening before the Moon rises on the 12th or even the 13th is a far safer bet. 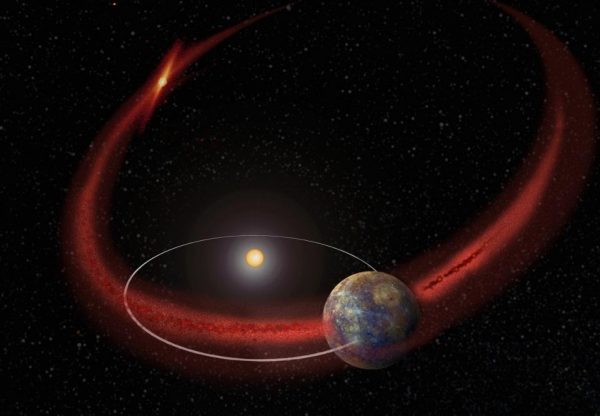 The debris stream of a comet (in this illustration, Comet Encke) is very wide: much wider than Earth. When we're closer to the stream's center, the rate of meteors can be increased. Image credit: NASA / GSFC.

Come get your fix of the great night sky views of August, just a week before the solar eclipse comes to your daytime skies!

With each meteor falling, does the darkness collapse around the trail of each photon of light at the same speed of light or slower?