"Even though the reason for taking the photographs was science, the result shows the enormous beauty of nature." -Miloslav Druckmuller, eclipse photographer

During those moments of totality, the Sun is eclipsed by a new Moon, with the latter’s shadow falling onto Earth. From within that shadow, the Sun’s disk is blocked entirely, revealing a slew of fainter objects: stars, planets, and the Sun’s corona, all of which cannot normally be seen during the day. Yet one object even brighter than all the stars -- the new Moon -- will remain invisible throughout the eclipse. 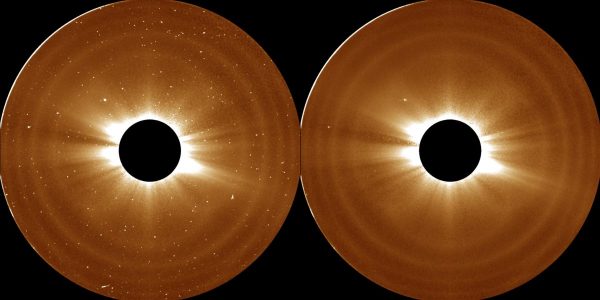 The Sun's atmosphere is not confined to the photosphere or even the corona, but rather extends out for millions of miles in space, even under non-flare or ejection conditions. Thanks to the masking technology of the coronagraph, we can view it from either Earth or space. Image credit: NASA's Solar Terrestrial Relations Observatory.

Despite the Moon acting as the ultimate coronagraph, blocking out 100% of the Sun’s light, and despite the full Earth reflecting its light back onto the Moon, you won’t be able to see the lunar surface at all. Why is that? It’s the relative brightness of something very close by: the solar corona. Even though the Sun’s corona is some 400,000 times less bright than the Sun, it’s still ~10,000 times brighter than the new Moon, enough to render it totally invisible to human eyes. It’s like trying to see a firefly an inch away from a shining light bulb, when you’re standing 20 feet away. 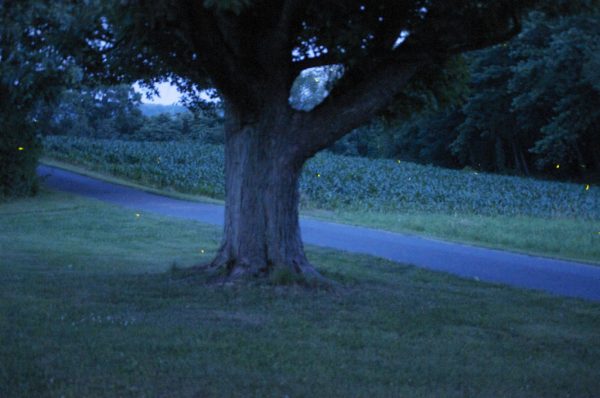 Fireflies may give off light and put on a spectacular show, but at only 0.025 lumens apiece, they need to be far away from any other, much brighter light source to be seen. Image credit: Otto Phokus / flickr.

In short: the corona is too close and too bright, and that’s why the Moon is only visible in photographs.

I'll be near Carbondale for the eclipse. I've purchased the glasses, have the hotel room reservation, and will pack plenty of food and water.

I hope being unable to see the new Moon is the worst problem I have that day!

May good viewing fall upon those who venture out for Monday's grand view.
:)

Why could i not see the Moon prior or after the eclipse? One would think we could see the moon moving toward the sun before covering it.

I hate to burst your bubble, but I was able to see the surface of the moon during totality. It was faint, but it was there.

I was near Vienna, IL along the centerline.

In fact, I was surprised by seeing it as all the pictures I've ever seen were of nothing but a featureless black disc.

"One would think we could see the moon moving toward the sun before covering it."

Think about it
1) the sun is VERY BRIGHT, even during partial solar eclipse.
2) normally you see the moon when the sun is reflected from it. But during solar eclipse the moon has the sun behind it, so the face you see has very little illumination (only the suns light reflected from the Earth back to the moon)
3) the constrast is therefore massive. The sun is so bright you have zero chance of seeing the very dim moon.
4) similarly you don't normally see the suns corona (the atmosphere). Its always there, but normally the sun is SO bright you cannot see it, as its much less bright. But during total solar eclipse the sun is hidden, so the corona becomes visible..

I'm no expert at all and don't pretend to be, but the moon is a solid. So therefore if it crosses the path of the sun, in front of, it would definitely block the light and you would be able to see the moon or a black hole. I was outside well before it took place and well after. I saw No moon before OR after the so called eclipse. Things that make you say hmmmm.