“The bedrock nature of space and time and the unification of cosmos and quantum are surely among science’s great ‘open frontiers.’ These are parts of the intellectual map where we’re still groping for the truth – where, in the fashion of ancient cartographers, we must still inscribe ‘here be dragons.'” -Martin Rees

Inside the nuclear furnace of the Sun, protons and other atomic nuclei are compressed together into a tiny region of space, where the incredible temperatures and energies try to overcome the repulsive forces of their electric charges. At a maximum temperature of 15 million K, and with a long-tailed (Poisson) distribution of energies at the highest end, we can compute how many protons are energetic enough to overcome the Coulomb barrier, interact with one another, and wind up in a more tightly-bound, fused state. 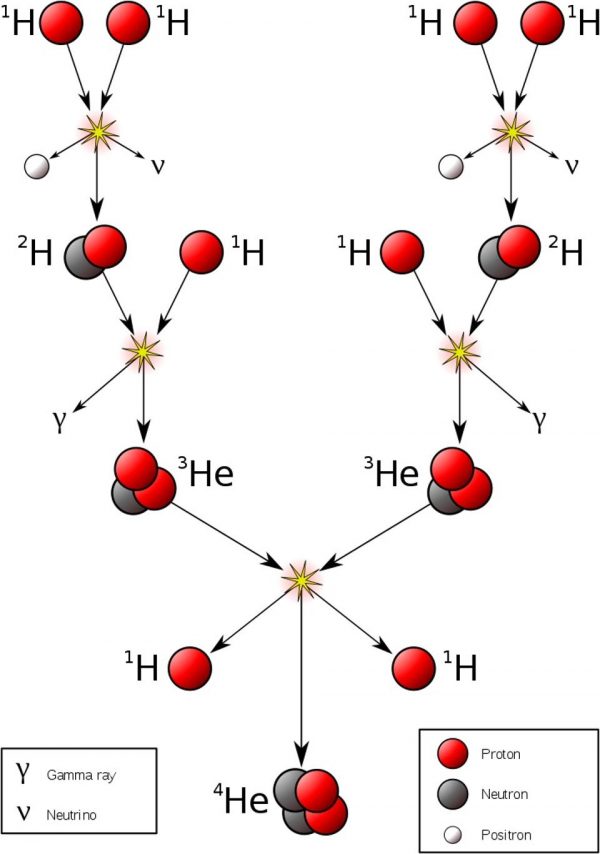 The most straightforward and lowest-energy version of the proton-proton chain, which produces helium-4 from initial hydrogen fuel. Image credit: Wikimedia Commons user Sarang.

That number, if you do that calculation, turns out to be exactly zero. When you consider that 95% of stars are less massive and reach lower core temperatures than our Sun, the situation appears to be even more dire. If there were no quantum mechanics, nuclear fusion would be an impossibility. Yet we’re saved by a feature of quantum indeterminism, where spread-out wavefunctions can overlap, and nuclear fusion as we know it can proceed.

The classification system of stars by color and magnitude is very useful. By surveying our local region of the Universe, we find that only 5% of stars are as massive (or more) than our Sun is. Image credit: Kieff/LucasVB of Wikimedia Commons / E. Siegel.

If Einstein and Bohr knew how the Sun worked, they could have settled the question of whether “God plays dice” with the Universe once and for all.

Oh Goodie, then there is free will..LOL

Hidden variable theory seems like a valid counter argument against entanglement at first (like Einstein thought) but if it was true then quantum computers would not work (however we have primitive but working examples of them today).

If you use statistical math to measure something deterministic, you still get statistical answers. This does not mean the process has become statistical, just that you have decided to describe it as such..

@CFT:
Einstein thought the same but turned out to be wrong in the end:
https://en.wikipedia.org/wiki/Hidden_variable_theory

(But of course this only applies to quantum mechanics. For throwing a real dice/coin outcome maybe perfectly predictable in reality.)

@ CFT, #3
I agree. "Uncertainty" describes our lack of information about all the parameters on all levels and scales. The laws of nature manifest perfectly without any dependence on our understanding or level of certainty.

So Heisenberg was driving down the road when a cop pulled him over.

The cop said "Sir, do you know how fast you were going?"

Heisenberg said "No, but I know exactly where I am!"

So the cop said "You were going exactly 100mph."

Ps, from Wikipedia on Hidden Variable Theory:
"A lack of a kind of realism (understood here as asserting independent existence and evolution of physical quantities, such as position or momentum, without the process of measurement) is crucial in the Copenhagen interpretation."

Boiled down: A lack of realism is crucial in the Copenhagen interpretation... and in Ethan's foolish insistence that without our "uncertainty" stars would not shine!

I am only a layman, so my opinion is not seasoned with years of advanced classical education. So in the kind expression of your tolerance, please correct any misimpressions that I now express.

I have recently learned that Hermitian quantum mechanics cannot explain radioactive decay, the decay of the proton, LENR and the proposition of this current article which is the production of energy by the Sun. Hermitian quantum mechanics is the subject that everyone learns in school. It's formulation is based on waves and its mathematics uses real numbers only. It can only explain what happens in closed systems. Another type of quantum mechanics is required to understand what is going on inside open systems as represented by LENR, radioactive decay and the decay of the proton.

I have used terms in the above paragraph that requires a better explanation.

What is a closed system

This equation, called Schrödinger's equation, describes the behavior of an isolated or closed quantum system, that is, by definition, a system which does not interchange information (i.e. energy and/or matter) with another system. So if an isolated system is in some pure state |ψ(t) ∈ H at time t, where H denotes the Hilbert space of the system, the time evolution of this state (between two consecutive measurements).

What is an open system

Open systems have input and output flows, representing exchanges of matter, energy or information with its surroundings.

Space-time reflection symmetry, or PT symmetry, first proposed in quantum mechanics by Bender and Boettcher in 1998

When we build an AI Mind with a modicum of innate knowledge, an example of logical or linguistic negation is not only necessary but not to be mundane or ordinary. So in the German AI we use perhaps the most famous of all scientific negations -- "Gott spielt nicht Würfel" -- and we use its English translation in the English AI: "God does not play dice."

Axil, #8,
Please complete your sentence,
" So if an isolated system is in some pure state |ψ(t) ∈ H at time t, where H denotes the Hilbert space of the system, the time evolution of this state (between two consecutive measurements).

Naming space after Hilbert is no better science than naming "spacetime" after Minkowski. Why not have a debate about "Minkowski spacetime' vs "Hilbert space?"

Then science is reduced to name- dropping your favorite theorist and discussing their imaginary models.

@Axil,
Atoms are not closed systems, they spin and move at incredibly high rates even within solid matter. Their energy is not self contained, as this would cause the atoms to consume their own mass quite rapidly, which would readily be detectable, so the energy that makes them go is constantly coming from outside the atoms. The thing that is staggering to consider, is how much energy must be constantly flowing through the atom each second to allow it to continue to function the way it does.

@Axil at 8,
Proton decay has not been observed, despite looking hard for it.

A very new paper deals with this issue of analyzing the communications between systems and how those communication channels affect the judgement about the mathematical tools used to understand these systems. In the sciences that deal with a high level of communication between system like condensed matter physics and optics, the Non-Hermitian quantum physics is the tool to use.

In the summary, the paper states:

Eleuch and Rotter have produced a number of allied papers dealing with this subject,

What I always found fascinating was the similarity of quantum tunneling and the way that one can create leakage of photons from one prism (total internal reflection) by placing them close together but not touching. The strictly classical wavetheory of course has a solution in the excluded zone, which is exponential rather than sinusoidal. Which is analogous to the solutions to the Schroedinger equation having exponential solutions in the classically excluded (tunneling) region.

Several years ago, inspired by the matter, I penned the following little ditty (actually originally mentioning Max Born - Bohr fits better though), it's cleverness lost on most lay people. I present it here for the amusement of the physics community. Please credit properly if you reproduce...

'Twas the birth of modern physics,
Einstein's annus mirabilis,
Beyond the music of the spheres,
and all which that could tell us.

Then the quantum world invaded,
Einstein's God does not throw dice,
and despite the protestations,
'til he died that was Al's vice.

Amidst the shouts that he ignored,
all the while that Neils Bohr goaded,
the secret that they neither knew,
those very dice were loaded!

...specializing in Geek humor for decades!

Is quantum tunneling the main interaction in a fusion bomb?