How Does Quantum Mechanics Allow The Sun To Shine? (Synopsis)

"The bedrock nature of space and time and the unification of cosmos and quantum are surely among science's great 'open frontiers.' These are parts of the intellectual map where we're still groping for the truth - where, in the fashion of ancient cartographers, we must still inscribe 'here be dragons.'" -Martin Rees

Inside the nuclear furnace of the Sun, protons and other atomic nuclei are compressed together into a tiny region of space, where the incredible temperatures and energies try to overcome the repulsive forces of their electric charges. At a maximum temperature of 15 million K, and with a long-tailed (Poisson) distribution of energies at the highest end, we can compute how many protons are energetic enough to overcome the Coulomb barrier.

That number is exactly zero. When you consider that 95% of stars are less massive and reach lower core temperatures than our Sun, the problem appears to be even bigger. Yet we’re saved by quantum mechanics, where spread-out wavefunctions can overlap, and nuclear fusion as we know it can proceed. 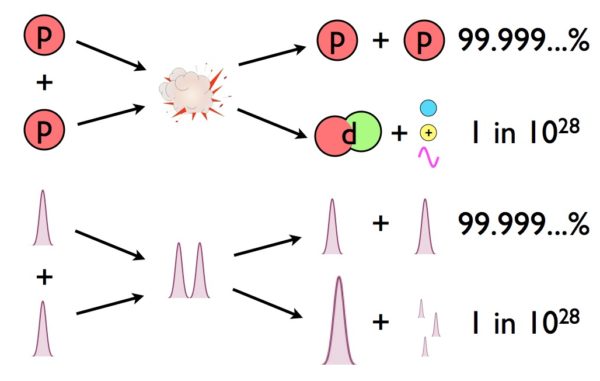 Image credit: E. Siegel, of how nuclear fusion occurs in the Sun thanks to quantum mechanics. From chapter 5 of his new book, Beyond The Galaxy.

At a fundamental level, it’s only the quantum nature of our Universe that enables the stars to shine at all.

I have a question regarding this statement: "But when neutrons and protons are bound together into helium, the entire combination of four nucleons winds up being significantly less massive — by about 0.7% — than the individual, unbound constituents."

What is the mechanism whereby the four nucleons end up being less massive even though we would (based on neutrons being more massive than protons) expect them to be more massive?

I'm not doubting that the fact is correct, just wondering how exactly it happens.

@1: Neutrons and protons are both made of bound quarks. When you add 2n + 2p, the conglomerate (now of 12 quarks) requires less binding energy than the four individual particles. The analogy isn't perfect but its sort of like adding 2H2 + O2 to get 2H2O and a release of energy; that release of energy comes because the collective OH bond energies are lower than the collective HH and OO bond energies..

based on neutrons being more massive than protons

I think you either misspoke or misunderstood here. The issue isn't n's being more massive than p's. What's going on here is [nnpp as a unit] is less massive than n+n+p+p.

@AC #1: You can do some research into "mass defect" and "nuclear binding energy" if Eric's answer isn't satisfactory, but everything I found pretty much said what he did.

This thread does try to delve deeper into the "why", but unfortunately I can't evaluate how accurate any of it is.

@4 - the short, layperson answer to that thread's question is that he's treating the nucleus as a uniform mass/mix of neutrons and protons, which is at best an approximate model. Its good for predicting some phenomena, but not for predicting others. QM creates structural effects in nuclei that often count more than the simple 'strong vs. electromagnetic' push-pull that he describes.

More detail: nuclei arrange themselves in 'shells' analogous to the way electrons arrange themselves in atoms (though they don't necessarily have a radial component), and in fact nuclei radiate electromagnetic energy in discrete lines just like atoms do, for analogous reasons - bceause those lines represent nuclei de-excitation from one shell to another. They also experience odd-even effects, because paired-up nuclei are generally more stable than odd-men-out nuclei. Which is why the nuclear binding energy curve looks more like a sawtooth than a smooth curve: the elements with odd numbers of protons are often less stable than either their Z+1 or Z-1 even "neighbors." Lastly, helium nuclei themselves are very stable due to QM effects, which is why we see a lot more alpha decay (an alpha particle *is* a helium nucleus) in heavy elements than, say, decay by the emission of a lithium nuclei.

the elements with odd numbers of protons are often less stable than either their Z+1 or Z-1 even “neighbors.”

Incidentally, if you've ever wondered why the recent discovery of new elements went 110, 112, 114, 116, 118...this is why. The odd-Z elements are expected to have much shorter half-lives, and thus be much harder to detect.

I thought you might say the greatest source of concentrated energy in the Universe today is *Dark Energy*.

I thought you’ve told us that Dark Energy makes up about 68% of the universe, Dark Matter 27%, and regular matter only 5%. And of course, stars would be only a subset of that 5%.

@Deceiver #7: Another example of your inability to understand the word "density."

Another example of your inability to understand the word “density.”

Thanks to Chris at RI, Rawhide!