"O. Hahn and F. Strassmann have discovered a new type of nuclear reaction, the splitting into two smaller nuclei of the nuclei of uranium and thorium under neutron bombardment. Thus they demonstrated the production of nuclei of barium, lanthanum, strontium, yttrium, and, more recently, of xenon and caesium. It can be shown by simple considerations that this type of nuclear reaction may be described in an essentially classical way like the fission of a liquid drop, and that the fission products must fly apart with kinetic energies of the order of hundred million electron-volts each." -Lise Meitner

Now that we've observed merging neutron stars for the first time, in many different wavelengths of light as well as in gravitational waves, we've got a whole new world of data to work with. We've independently confirmed that gravitational waves are real and that we can, in fact, pinpoint their locations on the sky. We've demonstrated that merging neutron stars create short gamma ray bursts, and shown that the origin of the majority of elements heavier than the first row of transition metals comes primarily from neutron star-neutron star mergers. 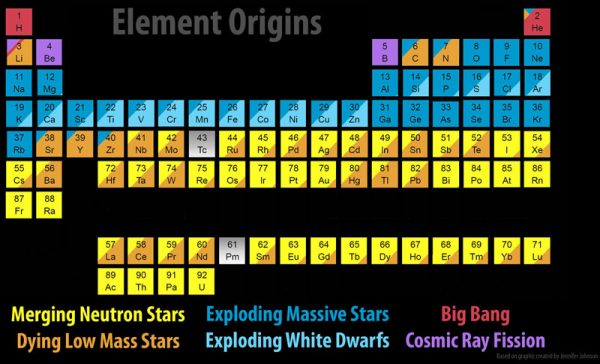 This color-coded periodic table groups elements by how they were produced in the universe. Hydrogen and helium originated in the Big Bang. Heavier elements up to iron are generally forged in the cores of massive stars. The electromagnetic radiation captured from GW170817 now confirms that elements heavier than iron are synthesized in large amounts the aftermath of neutron star collisions. Image credit: Jennifer Johnson / SDSS.

But the new discovery raises a ton of questions, too. Seeing this event has presented theorists with a number of new challenges, ranging from the event rate being some ten times as great as expected to much more matter being ejected than we'd thought. And what was it that was left behind? Was it a neutron star? A black hole? Or an exotic object that's in its own class? 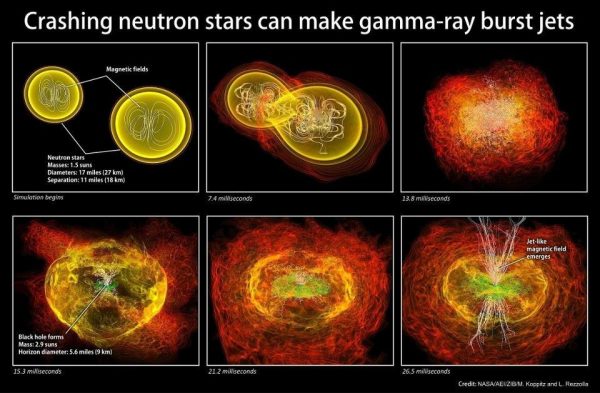 We knew that when two neutron stars merge, as simulated here, they create gamma-ray burst jets, as well as other electromagnetic phenomena. But whether you produce a neutron star or a black hole, as well as how much of a UV/optical counterpart is produced, should be strongly mass-dependent. Image credit: NASA / Albert Einstein Institute / Zuse Institute Berlin / M. Koppitz and L. Rezzolla.

There are some great advances that the future will hold for gravitational wave and neutron star astronomy, but it's up to theorists to explain why these objects behave as they do.

Would this be one way to make a quark star? Since quarks are also fermions the Pauli Exclusion Principle ought to provide enough pressure under certain circumstances to make a star that looks like a gigantic hadron held together by gravity. Or would such a hypothetical quark star already be so dense that it would make an event horizon all by itself?

Could the omnidirectional gamma ray bursts be coming from the ejecta themselves? It seems like the process of going from a lump of neutronium to all those heavy elements is a lot like the fission reaction of an atomic bomb - just one the with the mass of 30 to 40 Jupiters.

@Anonymous Coward #1: Yes, it is possible. Two merging neutron stars close to the mass limit (about 2.5 solar masses, depending on the equation of state you like) would clearly exceed the mass limit for the final state.

Whether that final state becomes a black hole directly, or an over-mass neutron star which collapses later, or something like a quark star, depends on astrophysical details we just don't know yet. Future GW observations, including the post-merger ringdown, will give us substantial information on the mass distribution and equation of state.

GW170817 didn't show a ringdown signal; we don't know whether that's because the merger went directly to a black hole, or for some other reason.

Have the initial orbiting black holes detected by LIGO been independently observed apart from laser interferometry yet?

CFT @4.
There is really no other signal likely observable over a distance of 2 billion LYs. So the answer in theory is no. And
we don't have their location on the celestial sphere narrowed down, we don't even know which galaxy clusters to search.

That's a good reason why Ethan thinks NS mergers are where the real discoveries will lie.

I fear you'll have to wait until EM telescope measurements are able to capture the impact of the accretion disks around two merging black holes for the independent observations you’d like. By definition there will be no EM residue from the merger of such entities, but the impact of their intersecting accretion disks (assuming both have one) is likely to be awesome!

The wikipedia entry on GW179817 says the the two LIGO sites and Virgo detected the signal.
It has images of "Time-frequency representations of data containing the gravitational-wave event" from the three sites. For the LIGO sites, a signal can be clearly seen, but for Virgo what is it on the image which represents the signal?

I'm going to regret the loss of scienceblogs: the format seems much better for viewing text contributions, which is after all largely what it's all about. I can't get on with Forbes: it's too cluttered, and wasteful of screenspace.