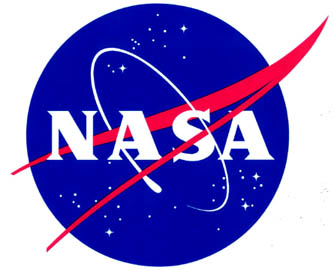 When the insignia is used in conjunction with other text (as in letterheads, business cars, or for agency or center identification), the font used is always Helvetica Medium or Light, upper and lowercase, flush left and ragged right. Incidentally, does anyone want to buy me this shirt?

The "worm" logo was designed in the mid 70's and was used until 1992. It's been since retired, I guess because it's aged much worse than the "meatball" has, and is now only used on merchandising. It is never used in conjunction with the "meatball." All of the NASA insignia are classified as public domain except the meatball, worm, and official seal. Here is a really great compilation of mission insignia patches. The NASA/Mir 1997 patch is particularly noteworthy, as is the following smattering:

The Space Station Mir insignia is a good example of the Russian Federal Space Agency's (commonly referred to as Roskosmos) staggeringly cryptic designs. Maybe these slashes represent "aeronautics" as the red swoosh in the NASA logo does. Maybe they do not! All of the Russian insignia, especially from the Soviet era, are really great. The US insignia are, on the other hand, so littered with weird pseudo-symbolic bullshit that they are also notable. "This rocket represents a rocket, and these stars represent stars!" Cool, NASA. It's like that story about the US government spending billions on the Fisher Space Pen that writes upside-down, while the Russians just used pencils.

OK, well, the pen cost $2 million, has been around since 1967, and the Russians don't actually use pencils, but whatever.

The International Space Station actually has a series of really good and twee patches, most of which include a Russian flag sort of rainbow-morphing into the US flag set against a backdrop of barren starry sky. I trip out about that kind of design because of its earnest desire to emphasize completely arbitrary notions of country and nationality, which of course mean nothing in space. I wonder how ISS astronauts handle how much the Station stresses its "international" nature, when all their countries look like green blobs from 250 miles away, anyway. This insignia is good, though, because it's so literal. The Russian one is even more amazingly straightforward, as it is just an outline of the ISS on a blue background and has some guys' last names on it.

The classic Apollo Program insignia. The inclusion of a golden idol of Apollo hybridized with the moon gives the whole program a mythic appeal. The implication is that NASA is sending rockets towards the Classical ideal of space exploration, a kind of Platonic form of the moon. Something else I find terrifying about this design is the fact that it bucks our left-to-right notion of linear progression -- the Moonpollo is to the left of the Earth, implying that the movement from Earth to the Moon is a right-to-left one, which is counterintuitive for a society that reads from left-to-right. Does this mean that the Apollo missions are inherently regressive? Maybe it's because Apollo himself is a figure of the distant past to whom we must return in order to progress. Any insight would be appreciated.

Apollo 11. This insignia is pretty epic; the eagle landing on the moon is a nice synthesis of the literal and symbolic as well as a throwback to Neil Armstrong's famous statement "the Eagle has landed," made when the Eagle lunar module first landed on the moon in 1969. Interesting aside: Wally Schirr, commander of the Apollo 7, refused for a moon to be included in his mission's insignia. "Save that for the guys who are going there," he was quoted as saying.

This one was for Space Shuttle Columbia, the first first STS ever launched, in 1981, and the second ever crashed, in 2003. NASA is now about to launch a shuttle for only the second time since the Columbia disaster. The last test flight was sort of dubious and experts have mixed opinions at best about whether the shuttles are still safe to fly. Floridians, keep your eyes peeled on July 1st!

This is kind of a teaser.

I've always been such a huge fan of NASA's graphic design. I used to wear a multi-neon puffy paint shirt of the "worm" logotype repeated from top to bottom.

I have the dream of designing a US State license plate and now, after this entry, I think I'd like to add some sort of NASA design project to my life goals list.

Atom Heart did a side project where he used the worm logo upsidedown, called "VSVN", and then had a suitable acronym. Geek electronic music stuff...

Also, about the right-to-left earth/moon thing... during the 60's, NASA's big proclamation was that it wasn't about getting TO the moon so much as insuring a safe return for the astronauts, to the degree that the mission wasn't considered "successful", let alone "over", until the medical exam after the recover of the capsule on earth proved the astronauts were above a certain score in fitness:

Perhaps the logo is meant to depict the RETURN flight of the Apollo mission!