The Earth is the New Moon

Stewart Brand, writing about space colonies, observed that "if you live in a satellite, the Earth is something that goes on in your sky."

For Felix Baumgartner, the daredevil skydiver who seduced the world with his chiseled jaw and seeming invulnerability to fear (and who broke the sound barrier with his body last weekend) the Earth is something else. The satellite he leapt from, a weather balloon 24 miles above the Earth, wasn't his home. But briefly, and especially for the millions who watched the gossamer balloon float upwards to the strange blue-black gradient of space's edge, it turned our home, the Earth, upside-down.

New perspectives on familiar sights have strange, heady effects. The Space Shuttle Endeavour caused a furor in Los Angeles last week as it paraded to its final resting place at the California Science Center; the relatively banal journey through what Angelenos call "surface" streets incited more hype per mile than its previous twenty-five sojourns to space and back, presumably because people were able, for the first time, to feel the scale of the thing, to see it in surreal contrast against the landscape of everyday life. Photos of its slow march through L.A. streets show the shuttle, a little worse for the wear, in silhouette against a Sizzler, a Midas tire shop, and the brown-to-tarmac gradient of Californian urbanism. Maybe NASA should have paraded the Shuttle around before its adventures in low-Earth orbit. Who doesn't want to see something soar into the sky that once trundled through a Bed, Bath & Beyond parking lot? 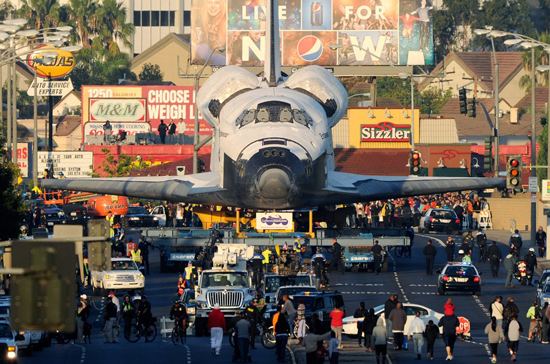 On a larger scale, Earthrise, the iconic image taken from Apollo 8 as it shot towards the moon, instigated a global reevaluation of the planet. It was a fresh perspective on something we all took for granted, and many credit the picture for catalyzing the environmentalism movement in the 1970s. But as far as new perspectives go, seeing the curve of the Earth from space with your own eyes is the ultimate paradigm shift. Suddenly, the world, which for your whole life you've known to be solid ground–the very definition of flatness, made from dirt to be kicked up and buried under–is a round, dimensional planet. Like an apple, it whirls silently in space, as Dusty Springfield sang.

My parents, as children, gathered around black and white television sets to watch a man step onto the surface of the moon. The footage was blurry, delayed. Last week, my friends and I gathered in a different way. Alone, and together, we scrutinized the tiny face of the Internet, watching in real-time (and high-def) as a man stepped out of a capsule not dissimilar to the Apollo lander. It was just as tin-canny, as claustrophobic. In, fact Baumgartner himself suffered from such extreme claustrophobia in his spacesuit that he almost couldn't bear to wear it. "As soon as the visor closes, there's this nightmarish silence and loneliness," he said in an interview, "the suit signifies imprisonment." 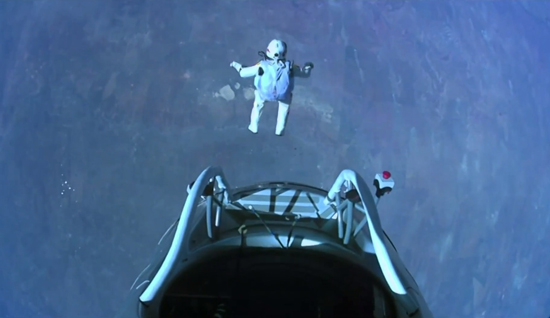 "The sky starts at our feet. Think how brave you are to walk around." –Anne Herbert

Unlike the moonwalkers, however, Baumgartner didn't take a step onto solid ground. He jumped into the void, and thanks to the placement of the camera, we jumped with him. We didn't just watch the record-breaking skydive from the ground, or from his weather-balloon diving board. The 21st century is an epoch of P.O.V. feats, of go-pros taped to helmets and steering wheels, streaming the direct visual stimulus of unthinkable feats directly to our eyes. It's a kind of exploratory telepresence; in our simultaneous visual culture, in which appearance is often conflated with experience, we feel we participated. After all, the moment Felix Baumgartner opened the door of his capsule and stood on the precipice, we all saw the curve of the planet at his feet. Would the moon landing have been different if the camera had been mounted to Neil Armstrong's helmet? If his steps were, in a sense, ours? 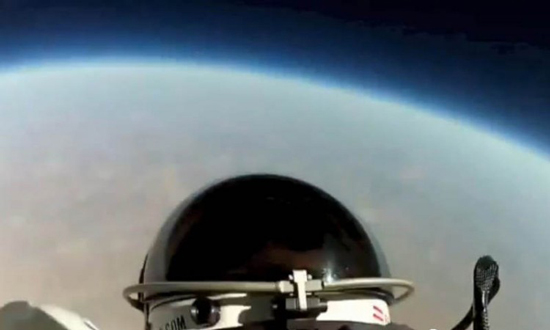 Why is Felix Baumgartner's jump so fascinating? It's an act of derring-do of the most extreme order–and for that we all toast our Red Bulls–but there's something more to it. It's a gesture that actually inverts our picture of the home planet, shifting the Earth from something you walk on to something you leap towards. There's no equivalent.

Well, maybe one: in 2007, I interviewed French parachutist Michel Fournier. Before Red Bull and Felix Baumgartner started plotting their total domination of the form, Fournier hoped to break Joseph Kittinger's 1960 record for human free fall with a similar weather balloon-assisted technical leap called Le Grand Saut. “When you’re in the air,” Fournier, who had 8,600 parachute jumps under his belt, told me, “you are struck with such a high dose of adrenaline that you immediately take yourself for the most beautiful of birds, the bald eagle. Only parachutists truly know why the birds sing.”

No amount of Twitter feeds and livestreams can broadcast the inconceivable thrill and horror of making the jump ourselves–truly, only parachutists themselves can know how it feels. But even from the digital backseat, it goes to show that we haven't yet run out of ways the Earth can amaze us. The Earth, maybe, is the new moon: a frontier that belongs to everyone.

Felix Baumgartner didn't just jump. He fell to Earth. He abandoned himself to the single most universal faith we have in our planet: that no matter how far we stray, it will always take us back.

I really love what you did here. You started off with Felix Baumgartner and what he did. It was a brief descriptive writing and then you shifted to what your words said, “upsie-down.” You then came back to Earth and talked a little about the space shuttle going through L.A. The roles between the human and the machine traded off. The human was now at the edge of space while the shuttle was stationed on the ground.

Also you have a very great way of descriptive writing. I’ve never read anyone’s blog or even articles quite like yours. You give such great imaginative imagery for the readers that they feel and experience just what you’re talking about. Another near perfect blog is what I read.

One thing I would change is in your last paragraph. “espite the profoundly human…” I think you forgot the “D” in the beginning of that word ;)

Hi Kevin, thanks for the kind words.
(And I fixed the typo, thanks)!

"We did it! We put a man on the earth!" ~ Stephen Colbert

This is a great information about the moon of earth.

FYI to readers that last comment is most definitely spam, but I let it slide because I am charmed by the phrase "this is a great information."

Poetic spam: 'the moon of earth' isn't bad either