On Seeing Jupiter Through a Telescope

"This one will look like a jellybean," the session director warns us. "Or, you know, when you empty a hole punch? The circles of paper that fall out? One of those." She's talking about Neptune, and I am about to step, carefully, up a ladder painted industrial yellow and wheeled into place in front of the centenarian eyepiece of the 60" Hale telescope at Mt. Wilson Observatory, incidentally the very place where Edwin Hubble, in 1925, discovered that our galaxy was not the entirety of the Universe, and later, that our Universe was expanding.

A jellybean, a piece of confetti: it seems her language is primed to describe nuances between round things seen from afar. Like the Eskimo, I imagine, with their apocryphal hundred words for snow, this astronomer undoubtedly boasts a pantheon of personal metaphors for "dot." Through a wide rectangular slit in the domed ceiling, the cosmos lies in wait, ready for the focal beam of the telescope itself: like a plastic straw, I'm told, poking into an ocean of night. The sky is uncharacteristically alive for Los Angeles, a lattice of flickering light nearly indistinguishable from the trembling, smog-blanketed city we glimpsed through the valley below as we wound our way up the mountain.

I think she conjures the hole punch because the edges it punches aren't quite clean, and stars like torn paper are crenulated, fringed with wisps of filament. Clearly they are pieces of something bigger, a whole sheet of paper somewhere, meaningful in its completeness, and whose exacting, cookie-cutter perforations are just a concession to some order we can't quite perceive. From where I'm standing, on Earth, at the foot of the ladder and looking up with my naked eyes at the stars, all of them look like jellybeans, or confetti.

Now I'm up the ladder and it's precarious, insensibly parked; I have to wedge my foot on the heavy metal casing of the telescope for balance. I perch strangely and squint into the eyepiece. Inside, the sky is still black but suddenly it's the black of space, not the black of night; of course they're the same thing, but the fractal glimpse though lens separates them. It's the black of space now, and, as promised, I spy a jellybean. Or something like it, bluish and strangely aqueous, as though it really were made of jelly, lit from within. Hanging there in the center of the circle, my straw-hole of vision. Neptune.

The pleasure I take in this sight is complex, subtle. At a star party a few years ago, at the McDonald Observatory in the desert reaches of West Texas, an astronomer stationed at a telescope-–pointed at a nebula, I forget which-–gravely intoned to me, "this is the farthest thing you'll ever see." That's the essence of it, and what makes it impossible to really appreciate. Through the eyepiece of an optical telescope, you see something right in front of you, and your brain says, there it is: a jellybean, four feet away. Of course, Neptune is 17 times the mass of Earth and far-flung as it gets, but that doesn't compute. It might be the farthest thing you'll ever see, but it looks so close, and in the absence of contextual clues, the ordinary functioning of perspective fires and misses.

And so your awe is self-inflicted. Your awe is one you name to yourself. You almost have to say it out loud, "that's Neptune," forcing the cognitive dissonance into place. Once there, accepting that your mind has seen farther than biological limitation is its own challenge; the implications take their time unfolding.

When the 100" Hooker telescope at Mt. Wilson saw first light in 1917, the poet Alfred Noyes was present. Noyes was so moved--by the long journey up the mountain, the egglike domes of the observatory on the hillside, the cathedral feeling of the structure--that he ended up writing a trilogy of epic verse, The Torchbearers, about the history of science. Its opening poem, "Watchers of the Sky," describes in meandering and awestruck detail the strangeness of the telescope, its ability to collapse distance and transmute meaning onto specks of light:

Then I, too, looked,
And saw that insignificant spark of light
Touched with new meaning, beautifully reborn,
A swimming world, a perfect rounded pearl,
Poised in the violet sky.

Noyes is describing Jupiter, by far the most impressive object visible through this kind of telescope; even in miniature, you can make out its whirling stripes and characteristic red spot. A marble ringed by four radiant sister-moons. I saw it too. After a series of variable jellybeans, its obvious planetness floored me. The astronomers had saved it for last, knowing it would spoil everything else. Because, honestly, it mostly all looks the same to the untrained: Neptune and Uranus both milky orbs, the stars of various sizes all literally twinkling, the nebulas so delicate you have to look away immediately to pin the fairy's-breath of dust in your mind.

Jupiter, albeit toylike, is fiercely recognizable; the awe I feel looking at it is more real, less contextual. It looks like a picture. It's not as difficult to understand. It draws all the other marbles into place. Without this clear reminder of scale and distance, the candy-bowl of jellybeans and pearls would otherwise melt together, a testament perhaps to the difficultly we take in perceiving space as a horribly vast and three-dimensional void populated by giant fires, orbs of gas, and ice. 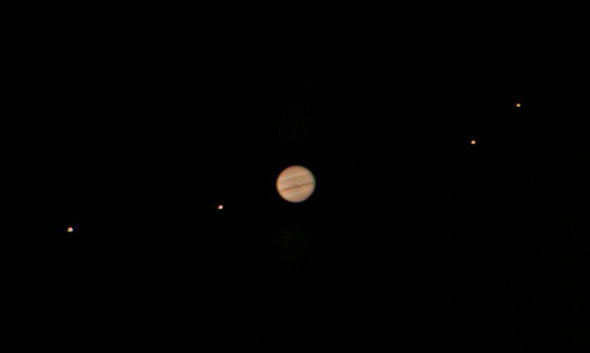 The mirror of the 60" telescope at Mt. Wilson is milled from 1,900 pounds of champagne glass, the only material at the dawn of the 20th century thought capable of supporting the necessary weight. If you aim a flashlight into the underbelly of the telescope, it gleams a deep green. It's appropriate somehow, to welcome distant light to Earth with this fanfare, to usher it home from its long dark journey into glass designed to cradle and protect something sweet and intoxicating, best appreciated in small sips.

Or, as Noyes wrote:

The polished flawless pool that it must be
To hold the perfect image of a star.

Claire, you write beautifully. Feeling so miniscule by simply looking at something light hours is truly awe inspiring. Thank you for sharing your experience.

Excellent writing! A very good read. It's hard to put into words that strange feeling of disbelief of seeing the planets in a telescope.
When visiting this past summer, my father couldn't believe that Jupiter's visible cloud bands are an actual surface feature of the planet, and not some sort of optical trickery from the telescope. Just like you said--he had to keep reminding himself that this lurid alien sphere is actually out there, and is very real.

Yeah, WHERE IS THE UNIVERSE?

verry cool. just recently (last 3 years) i have found myself looking up every time i go out at night. i have discovered a love of the night sky and have followed the perseiid and geminid meteor showers religiously. to see a shooting star, or comet dust, is a life changing experience, so to see a planet up close and personal must be [insert word for awe inspiring, awesome, exhilirating, fantastic, so...] aweshilirantastic & inspiring!

we go to morrisdale, PA every year (middle of nowhere up a mountain) and to see that not just are there more than 20 stars out there, as opposed to seeing the city's night sky, is incredible. and every time i see the stuff between stars (i think it's why they call it the milky way) beyond seeing jupiter shine brighter than the moon... its breathtaking. i sed a tear every time. and moan if it's cloudy that weekend.

thank you for this article. linked to from andrew sullivan's dish blog.

Yes you write beautifully no doubt.Now i ache to peer through a telescope-wish it were possible!