USA Science & Engineering Festival X-STEM Speaker renowned aviator Barrington Irving sums up his current mission as a role model this way: "Kids want to be challenged, but today too many are bored and uninspired. I want to use aviation to excite and empower a new generation to become scientists, engineers, and explorers."

He has a lot to inspire kids about. Born in Jamaica and raised in Miami Florida's inner city, surrounded by crime, poverty, and failing schools, he beat the odds in 2007 when, at the age of 23, he became the youngest person ever (and only African American) to pilot a plane solo around the world. 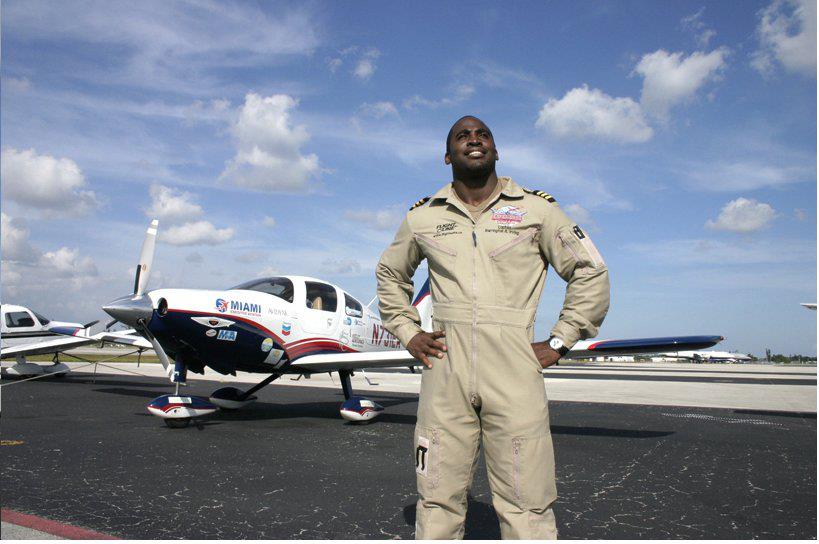 His message for kids: "The only thing that separates you from CEOs in corner offices or scientists in labs is determination, hard work, and a passion for what you want to achieve. The only person who can stop you from doing something great is you. Even if no one believes in your dream, you have to pursue it."

The secret, he believes, is having a dream in the first place, and that starts with powerful learning experiences that inspire kids to pursue careers—particularly in science, technology, engineering, and math (STEM).

How did Barrington become inspired in aviation? That moment came at age 15 while he was working in his parents' bookstore. One of their customers, a Jamaican-born professional pilot, asked Irving if he'd ever thought about becoming a pilot. "I told him I didn't think I was smart enough," recalls Barrington, "but the next day he gave me the chance to sit in the cockpit of the commercial airplane he flew, and just like that I was hooked. There are probably millions of kids out there like me who find science and exploration amazing, but lack the confidence or opportunity to take the next step."

But for Barrington, fulfilling his dream of a career in the cockpit was far from easy. The expense of private flight lessons was a problem -- so he did what he thought was the next best thing: he saved his money to buy a flight simulator game that allowed him to fly anywhere and in any kind of weather conditions from the safety of his PC. It was a start, and made him passionate enough to save more of his money so that he could afford flight lessons.

Later, episodes of discouragement arose. By the time he turned 21, Irving had lost friends to violence and prison, so he was already thinking about his own legacy. "I'll never forget asking myself the question, 'what's one thing I can do whether I live or die that would be worth something?' The answer hit him: "Fly around the world."

It was one of those ideas, he later told National Geographic magazine, that was great in principle, but a struggle in reality. He encountered roadblock after roadblock for nearly two and a half years, especially funding, which was difficult to obtain, but that didn't stop him from pursuing his dream. He was later able to secure over $300,000 in donated parts to manufacture and assemble his plane.

So at the age of 23, Barrington Irving finally had his plane ready for his flight around the world. He took off from Miami with only $30 in his pocket.

Some 97 days later, when he returned he was greeted by thousands of people with congratulatory banners and signs, and what really stuck out was the number of young people who had followed his journey.

Building on that inspiration has turned into his mission in life. After his history-making journey, he began challenging kids from some of Miami's failing high schools to build a plane from scratch, which he would then pilot. In late 2014, Irving will also be taking to the skies again through an amazing project he is spearheading through his Experience Aviation non-profit organization: the first-ever flying classroom, which he is transforming from a jet. Once completed, he says, this will be the only classroom capable of going from 0 to 41,000 feet in 19 minutes.

In it, he will then embark on a 51,000-mile air and land expedition in which children across the nation and around the world (through high-tech communication links) will be able to interact with him as he conducts experiments that they choose and help monitor. He's hoping he will be able to get more students excited about the STEM fields.

He is the recipient of many accolades for his historic achievement and his pioneering work in the field of aviation education, including a 2007 U.S. Congressional Resolution (honoring his solo flight); NASA's SEMAA Trailblazer Award; and the Medallion of Excellence -- the highest honor given by the Florida State Senate.

Says Barrington: "We want to be the best, but we're afraid to challenge our kids to be the best." That's something that this aviator is hoping to change one flight at a time.