Cassidy Williams: An Emerging Computer Scientist with a Desire to Inspire More Women in STEM 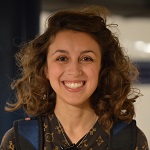 Twenty-two year old Cassidy Williams is passionate about being a role model to encourage more young women to pursue careers in computational science and other areas of science, technology, engineering and mathematics (STEM). As an Iowa State University senior last spring majoring in computer science, she shared her own personal story during a TEDxDesMoines Women presentation about the joys and challenges of being a rising innovator in her field -- and from the comments she received afterwards from the audience, she is well on her way to inspiring tomorrow's young female innovators in exciting ways."Wonderful speech," posted one mother on the TEDX website. "Thank you for being such an inspiration for young women everywhere! I can only hope that the doors you are working to open are there for my daughter when she gets older." Wrote another young woman: "I love her drive and optimism...Getting more girls interested in pursuing STEM careers, requires stories like these." LockerGnome's Chris Pirillo shared, "I believe that Cassidy is a perfect STEM model for women and humankind."The challenge of attracting and retaining more women in computer science is indeed significant, says Cassidy, who graduated from Iowa State recently and is now a software engineer with Venmo in New York City. "I've noticed that there aren't many females in this field at all," she explains. "In my graduating class, there were only 4 of us left, out of many. In my opinion, that's ridiculous and just not right." She adds: "Girls drop out like flies in computer science, unfortunately, and we have to change that. If you're a team only seeing half the picture, how do you know you're making the best products?"Even before college graduation, Cassidy had already established a track record as an achiever and emerging leader in a field that few women venture. When she was an eighth-grader in Downers Grove, Ill., she taught herself how to build her own websites. Almost a decade later, as an Iowa State University junior, she was selected -- with her sister Camryn, who is also a computer science major -- by the National Center for Women and Information Technology (NCWIT) to be among 10 female undergrads to represent students at the White House's Tech Inclusion Summit to discuss ways to increase the rate of women, minorities, and others in STEM. As a senior, she was chosen to make a presentation to the United Nations on a project empowering women in STEM.But it was Cassidy's skill at winning problem-solving hackathon competitions in computer science that especially attracted attention. While interning for Microsoft's Bing Ads team in the summer of 2012, she was encouraged to participate in her first hackathon -- one sponsored by Microsoft's Online Services Division. She won the competition and was thereafter hooked on hackathons. After that, she participated in, and won, many more hackathons, some small, some large.However, her most significant hackathon win was on board a British Airways plane from San Francisco to London: the iconic UnGrounded Thinking Hackathon in July 2013. Her team presented their winning project in London as well, and won that competition, too. "That hackathon has opened up the most opportunities for me," says Cassidy, whose winning project, AdvisHer, took a stance "to advise, advocate, and accelerate women in STEM, to build a community around them, to encourage people, mentor each other, and provide financial support and encouragement."Her prowess at hackathons was rewarded by being named a co-organizer of the International Women's Hackathon for 2014 at the U.S. Science and Engineering Festival. This annual crowdsourcing event focuses on empowering young women in computer science and encouraging them to lead, and to find and be mentors to others.On her journey as an emerging young leader in computer science, Cassidy has also spoken at such prestigious gatherings as the National Center for Women & IT Summit, the U.S. Department of Labor's Diversity in Tech event, the Grace Hopper Celebration for Women in Computing, and the IINSPIRE (Iowa-Illinois-Nebraska STEM Partnership for Innovation in Research and Education) conference.Her advice for young girls considering entering computer science and other STEM fields? "Ask lots of questions," she says. "Ask for help, ask to meet people, ask about your current assignments. People are willing to help you, and you never know what you'll get out of it --STEM allows you to use both sides of your brain more than any other field, and you have to be both logical and creative to be an innovator to solve the world's problems."Click here for more information.