α Centauri B, a mere 4 lightyears away has a terrestrial planet orbiting it.

The most interesting aspect of the discovery may be the inferences we can make rather than the planet itself.

The discovery by the Geneva Observatory team using the 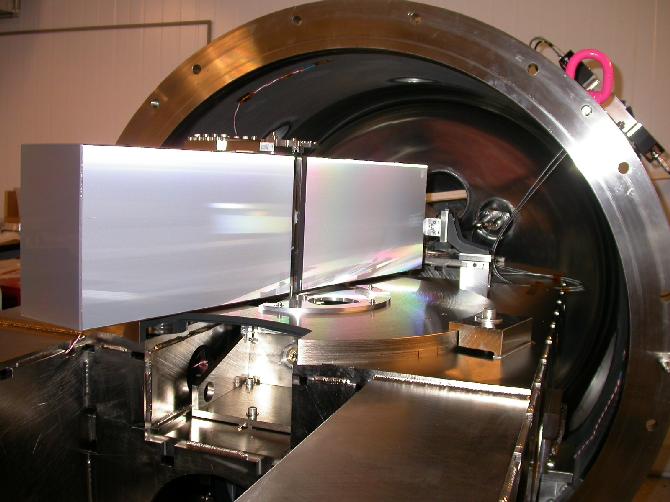 HARPS spectrograph is a wonderful example of precision high cadence spectroscopy and the ability of observers to find planets wherever they may be. The precision of the measurment is 0.5 m/sec, which is astonishing.

The discovery will be published in Nature (X. Dumusque et al. Nature 17 Oct 2012) thursday, and was due to be announced wednesday at 1 pm, but some idiot broke the embargo and ran the story early, so it is now coming out in pieces.
This particularly annoying, because I teach my exoplanets class at 1:25 wednesday and was planning to surprise them with a change of topic... bloomin' journalists!

The planet has a mass of at least 1.1 Earth masses, with the true mass being 1.1/sin(i) where i is the unknown inclination to the line of sight. It could plausible be as high as 6 earth masses, but is more likely to be in the 1-2 Earth mass range.

Its orbital period is 3.2 days, around the K1V secondary star of the Alpha Centauri system, the primary, α Cen A, being a G star slightly more massive than the Sun. The third star, Proxima Centauri, is a low mass M5 dwarf about 15,000 AU from the inner binary.

The system is a first magnitude star, the closest to the Sun, visible in the southern hemisphere.

At 0.04 AU circular orbital radius the planet has a mean temperature of about 1,200-1,500 K, and is almost certainly tidally locked, with one hemisphere facing the star.

The system is a triple, with α Cen B orbiting the primary with a semi-major axis of about 17 AU, orbiting every 80 years or so, and eccentricity of about 0.5

α Cen A is cannonballing to within 8 AU or α Cen B every century or so.
At closest approach the stars come as close as Saturn is from the Sun, and then recede to almost the distance Neptune is from the Sun.

That doesn't leave a lot of room for planets.
It is very impressive that there is one hiding in there.

Alpha Centauri has been a priority target for the HARPS team, and the competition from Debra Fischer at Yale has been doing high precision, high cadence observations of the system for several years, and we knew already that there were most certainly no giant planets or large ice giants like Neptune orbiting anywhere in the system.

The interesting thing is that the presence of the one planet cuddled up against its parent star is almost certainly the signpost for another planet or two further out, and since we haven't seen them yet, they must have comparable masses of Earth mass or few.

We don't think terrestrial planets can form this close to their parent stars. So something moved the planet from its birth location further out.
It is possible α Cen A pushed it in, through the Kozai Mechanism, but only if the planet's orbit is highly inclined to that of the star, which is somewhat unlikely. It is more likely the orbits are near coplanar (which incidentally implies the planets true mass is near its observed minimum mass).

It take a planet to move a planet.
As a toy scenario, imagine the planet formed a respectable 0.2 AU from α Cen B. A kick up to an eccentricity of 0.9 or so would lead to the planet circularizing to its current orbit.
But, to provide the kick there must have been at least one other comparable mass planet in the system. Two others would be better, at orbital radii in the range 0.25 - 2 AU or so.
It is not unlikely the other planet or planets are still there. They could have been kicked out far enough for α Cen A to knock them out of the system, but that is not very likely.
So there may well be a 1-3 Earth mass planet with a semi-major axis of about 1 AU, and eccentricity of maybe 0.8 or so in the system.
Or two planets, with moderate eccentricities.

There are almost certainly several more planets to be discovered there, around both α Cen B and α Cen A!
In principle they may include Earth mass planets orbiting close to the habitable zone of either planet, though at least for α Cen B any planet there is likely to in an uncomfortably eccentric orbit.

This is quite wonderful! And, frankly, kind of unexpected to me -- I'd always thought that the science-fiction scenarios of an Earth-like planet at Alpha Centauri to be exceedingly optimistic simply on the basis that it's our nearest neighbor.

As you say, this one isn't habitable but it indicates a realistic possibility of one that is. I still can't really imagine anything so fortunate for us, but then this sort of underscores how far we've come from the days when almost everyone assumed that small, rocky planets were rare, those in the habitable zone even more so, and therefore anything at all like a terrestrial planet with life was so improbable as to be absurd. We don't live in those times anymore. I recall when the very idea of any kind of extraterrestrial life, anywhere, was thought to be self-evidently nuts. Things have changed so much and sometimes I find myself amazed by it.

So, well, it might be the case that terrestrial-massed planets in the habitable zone could be common, rather than rare. If there is one at Alpha Centauri, then that's a strong indication that this is the case. But then, we were being rather anthropocentrically exceptionalist in assuming that local conditions were nearly unique and not common.

I read the paper last night and I'm impressed by the number of corrections and adjustments applied to the RV data before the planetary signal is extracted. I see that there is still quite a bit of scatter in the RV measurements which remain.

Although it would be a nice story to find such a small planet around one of the components of alpha Cen, I'm not convinced that the planet is really there. Would you be willing to wager a bottle of your favorite beverage on its existence?

I am told the outer limit for a stable orbit around either star is about 1 AU, but during the brief formation period a circumstellar disc may have extended further out. Even so, if this is one of several planets they have probably *all* spiralled close to the star, leaving the outermost close enough to be fried.
Never mind, any expedition out there will be made by AIs and robots, and they may be comfortable in the extreme cold of the planet's permanent night zone, providing superconductivity at ambient gtemperatures.
So for a star-faring supercivilisation that has left the wet gunk substrate behind, this tidally locked world is actually better than Earth.