Carlsen to Face Anand For the World Chess Championship!

It would be a serious dereliction of my bloggily duties if I did not comment on the big Candidates Tournament, recently concluded in London.

My comment is this: Wowee wow wow! What a great tournament!

This was the tournament meant to determine the next challenger for the current World Chess Champion, Viswanathan Anand of India. The participants were eight giants of the chess world, who qualified for the tournament in various ways. Going in, virtually everyone would have picked Magnus Carlsen, of Norway, as the clear favorite. Levon Aronian and Vladimir Kramnik were also plausible winners, but anyone else was a very dark horse indeed.

And that's exactly how things played out. At the halfway point, Carlsen and Aronian were well ahead of the pack at plus three. They were completely dominant, with Kramnik, at the point, only managing a series of draws. Kramnik was a bit unlucky, since he had both Carlsen and Aronian on the ropes in their first individual games before letting them escape with draws. But no one really took him seriously when he said, at a press conference, that he had not yet given up on the tournament.

Then Kramnik got hot! He won four of his next five games, including a win against Aronian in their second game of the tournament. Carlsen, for his part, stumbled badly when he lost to cellar dweller Ivanchuk. After round twelve, with just two rounds to go, Kramnik took the lead. Suddenly he was the favorite to win the tournament, which would have been interesting, since Kramnik was the World Champion before Anand beat him to win the title. Rematch, anyone?

Round 13 seemed to be heading towards Kramnik's coronation. Carlsen was getting nowhere as black against another cellar dweller Radjabov, while Kramnik was spanking Gelfand pretty severely. But then Gelfand found a miracle draw, and Carlsen managed to reach an endgame in which he had a slight advantage. That's all Carlsen, needed, and after going all boa constrictor for 89 moves, he forced Radjabov to resign.

This set up what was probably the most suspenseful last round of a chess tournament in recent memory. Because of how the tie breaks worked, Kramnik needed to do strictly better than Carlsen. Either a Kramnik win against a Carlsen draw, or a Kramnik draw against a Carlsen loss, would have given Kramnik the title. Since Carlsen was playing white, it was mostly taken for granted that he would be able to make a draw at will. So Kramnik had to go gunning for a win, as black, against Ivanchuk.

What happened? Kramnik and Carlsen both lost.

Interestingly, Vassily Ivanchuk, who finished next to last and mostly was not taking the tournament very seriously, nonetheless notched up wins over both Kramnik and Carlsen.

So Carlsen wins. That is appropriate, since he has clearly been the strongest player in the world over the last two years. The fact is, I think most chess fans really wanted to see a Carlsen vs. Anand match. This is a match, incidentally, in which Carlsen will probably be considered the favorite. The event might take place as soon as November. Stay tuned!

I don't have the patience right now to annotate one of the games, so here's an amusing problem I came across recently. It's white to play and mate in two. Keep in mind that the convention is that black is always moving down the board. So, that black pawn on a2 currently has no moves. If the black king moves, then the pawn will be able to promote. This was composed by the great American chess composer William Shinkman in 1894. It's not too difficult, so have a go! 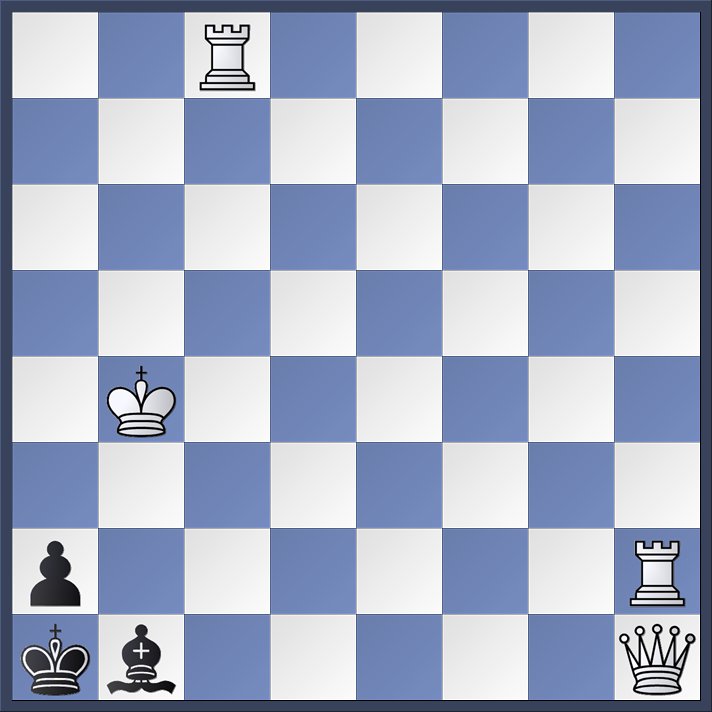 I'm sure someone will manage to leave the solution in the comments.

Some boneheads like to call Kramnik Drawnik, something I never have understood. In this tournament he pulled off one of the most impressive series of win in the already rich history of chess. As such I feel empathy that he didn't make it in the last round.
I am not so sure if Carlsen is the favourite. Somehow Anand after all these years still manages to be underestimated. Carlsen is very, very good in grinding down weaker opponents. His opening preparation leaves something to desire though. Anand very well might be capable of avoiding the technical positions Carlsen likes so much.
The match will not be over until it's over.

"I don’t have the patience right now to annotate one of the games"
Dennis Monokroussos on his site has annotated all games of all rounds but the last two.

Rc2 would just be a stalemate, alas. I think Andy has it right. The corner-to-corner queen mate is pretty nice. Interestingly, there is a mate in three with 1. Rxa2+ Kxa3 2. Qa8+ Kb2 3. Qa3 mate, with another corner-to-corner move by the queen.

I wouldn't say that Carlsen is a heavy favorite. It will not be shocking if Anand wins. But Carlsen's been looking awfully good lately, and Anand has been rather shaky. He barely won the match against Gelfand, recall.

Here's another cute mate-in-3 option: 1 Qa8 Bc2 2 R(either)xc2 Kb1 3 Qxa2#. It works because once the queen is off the first rank Black can, and therefore must, move the bishop. If the bishop goes anywhere other than c2, then White plays 2 Qxa2.

Am I missing something? How does Rc2 lead to a stalemate? Black can still move his pawn to a3 or a4 after Rc2, right?

There is one move white can make that would lead to an immediate stalemate. That would be Ka3.

Oh, never mind my two posts above. I was moving black up the board. Just read the problem more carefully. Doh!

I think I've got it:

The puzzle seems is easier than it looks.

No matter where the bishop goes there is no way he can attack the Rook on H2 or the Queen because they are both on dark squares. The king also is on a dark square too and cannot be attacked either.

It was an easy puzzle (once I started looking at the board correctly :)). As a poster above mentioned, the position is a stalemate unless you move either the rook on h2 or the queen. Moving the queen frees the bishop, which will be moved to c3. This gives no chance to mate on the second move, since the only piece that can deliver check is the queen. If you do so along the diagonal, the move Kb1 gets black out of check. If you do so along the 1 rank, the move Bb2 blocks the queen. Therefore, moving the queen is not the right idea.

That leaves moving the rook. Moving the rook forces Kb2. To checkmate after Kb2, we must be able to deliver check and attack all the surrounding unoccupied squares. Once you realize that your rook on c8 and your king do so with the exception of delivering check and attacking square a1, the answer is easy. The queen must move to h8. To do so, we have to remove the rook from blocking the queen from reaching h8. The only way to do this without generating a stalemate is Rb2. Hence, 1. Rb2 Kxb2 2. Qh8++.

Alas, 1. Qe1 is stalemate. The white rook covers b2, making it impossible for black to move his king there.

Memo to self: no more analyzing chess problems while half asleep.

I'm trying to find tips on how to improve the quantity of remarks alone weblog, how have you achieve carrying this out?

The NYT had an article on Carlsen yesterday in the Monday Sports section. Very interesting, this new, uh, "rock star" of chess. If you ever have the impetus or interest, I (for one) would love to read a full post from you about Carlsen. The NYT piece was a good person-oriented article, but very short on the chess, of course.
Thanks again for your years of blogging, I always pick up something new to mind-chew.