Regular blogging will resume next week, once I have finished digging out from the pile of work that didn't get done during my recent travels. But since Sunday Chess Problem waits for nobody, I've picked out a tasty little morsel for you.

One of my favorite motifs in chess is that of a fortress draw. This refers to a position that is drawn simply because the attacker has no possible way of making progress against the defender's set-up. Typically the term is applied to a situation in which the defender is down a substantial amount of material, so that it is surprising that the attacker cannot win. This week's problem provides a delightful example. It is an endgame study composed by G. N. Zakhodiakin in 1930. White is to play and draw. 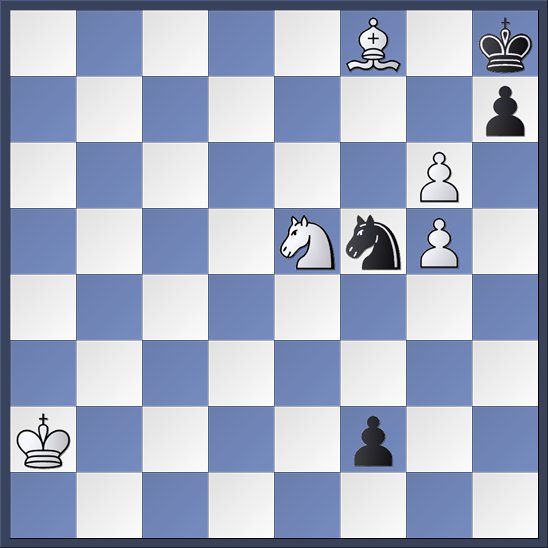 Remember that when we write down chess moves, the vertical files are labeled a--h from left to right, while the horizontal ranks are labeled 1--8 from bottom to top. So, in the position above, the white king is on a2, while the black king is on h8.

It certainly looks bleak for white. Black's f-pawn is poised to become a queen, and white seems to have no way of stopping it. If we go through our repertoire of drawing techniques, none of them seem very promising. Can white finagle a stalemate? A three-fold repetition? Does he have a tactical way of grabbing the f-pawn? No on all counts. 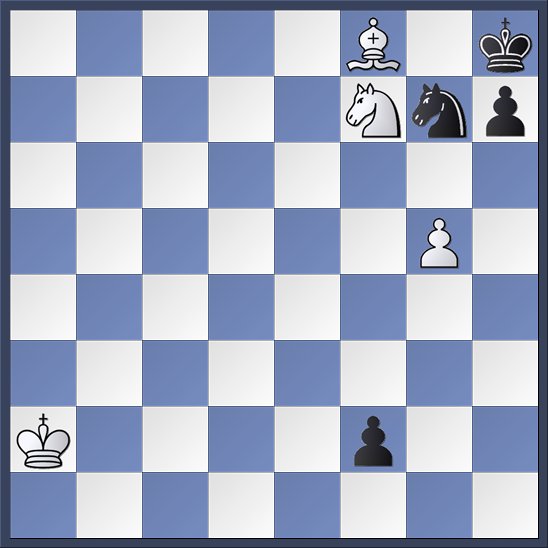 For completeness, we should note that black did not strictly have to take the g-pawn with his knight on the first move. He could have played 1. ... Kg8. But then white would have had a tactical solution after all: 2. Ng4! And now black can only protect his f-pawn by promoting with 2. ... f1Q. White now mates in two with 3. Nf6+ Kf7 4. g8Q mate.

Now, back to the action. Black must play 2. ... Kg8, but now it really appears that white is out of tricks. Both of his pieces are attacked, and he still has to worry about the f-pawn. But this is where white gets clever. He plays 3. Bc5!!: 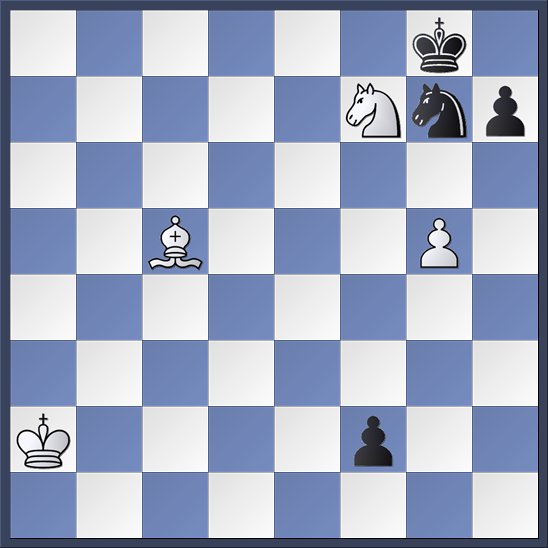 Black clearly cannot allow his f-pawn to be taken, since then the position is just an easy draw. So play continues with 3. ... f1Q, and now white may as well play the spite check with 4. Nh6+ Kg8. White now plays 5. Bd6!, bringing about this position: 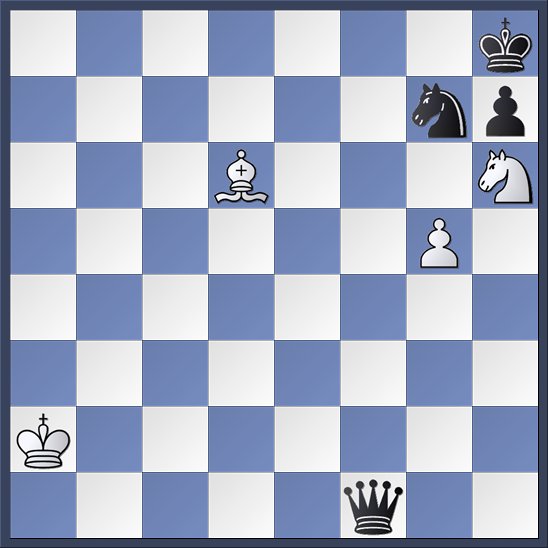 At this point you might be thinking, now what? White's down a queen, for heaven's sake, so how is he going to keep the game going? But look again! The problem's over, since this position is just a draw. It really is. White will just make waiting moves with his king, and what can black do?

Let's consider the possibilities. The white bishop can never be taken by the black queen, since then white will bash out the fork with Nf7+. The white pawn on g5 is protected by the same tactic. If black ever takes it with his queen, white forks king and queen by Nf7+.

The black knight can never move, since white will just play Be5+ and chase it back.

But what if black prepares the knight move by using his queen to guard e5? No dice! White just ignores the queen and plays Be5+ anyway. If black ever replies with Qxe5, then Nf7+ still forks the king and queen.

If this position occurred in a game, black would run out of time before finding a useful move.

I use Fritz 11 to generate the diagrams for these posts. Interestingly, Fritz does not recognize this position as a draw. Even after analyzing for several minutes it claims an easy win for black. But the moves it suggests are just nuisance checks by black that do not lead to any progress. This is one of the few weaknesses in modern chess-playing software. They have trouble with the idea of a fortress draw.

Blogging has been a low priority lately, partly because there's been too much other stuff going on, and partly because I haven't had much enthusiasm for it. The end of the semester is always a bit of a grind. But the long-suffering fans of Sunday Chess Problem should not have to wait another week…

This week I have another short, one-liner for you. It is another one I found at the end of one of Aviv Friedman's videos. He did not mention the composer, but I got a real kick out of it. The solution is short, but there is a lot of strategy packed into it. It is also one of those problems…

Well, the final snow tally in my neck of the woods was a little over two feet. Impressive! On the other hand, there doesn't seem to have been much damage. There were no strong winds, we never lost power, and all of my trees seem to be intact. And it means I get another snow day tomorrow!…

Great study! I can understand why you would like the idea of a fortress draw, the thinking involved in showing that there is a fortress draw is closer to mathematical thinking than is usual in chess.

Two notes: black plays Kh8 in his fourth move, not Kg8. And perhaps it should be pointed out that White must make sure that Black can't capture with check. So the white king should stay away from a3 and c1 (which can be easily done.)

My chess program also thinks it is utterly lost as white but it finds the corrects moves quickly anyway. I am guessing it sees that the moves are the only way to hold on to its pieces for a while, but it can't see within its search horizon that it is actually going to be able to hold on to them forever.

I think that conventional chess algorithms would have to search until it discovered a draw under the 50-move rule before it would realize the position is a draw.

This astounds me; I've never seen anything quite like it in chess.

And it makes me Very Happy that it confounds the Demon Fritz which beats me Every Single Time :(

How'd the USATE finish up for the team, btw?

so what is the correct move for the computer BQa6?

@Will: assuming you mean 5...Qa6+ White just moves the king. All the remarks made by JR remain valid.
It's a very funny problem.

Be sure to check out the March 2014 issue of Scientific American. There is mention of chess in the article on einstellung effect. Boards displayed.