This week we continue our look at helpmates. This week's problem has very different feel from the two helpmates we have seen thus far. It was composed by Joao Santiago and Nenad Petrovic, back in 1951. The stipulation calls for helpmate in four: 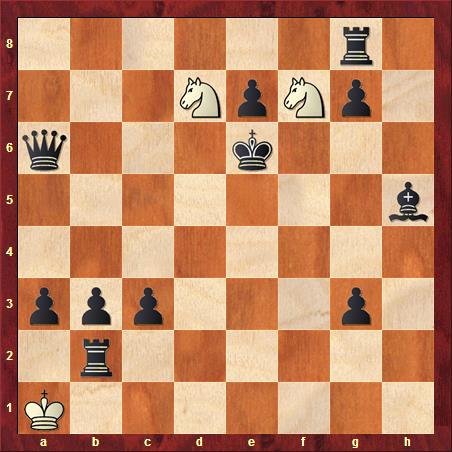 Let me remind you that in a helpmate, white and black cooperate to contrive a position in which black is checkmated. We assume that black moves first. Even though white and black are cooperating, normal chess rules apply. In particular, if either side is placed in check during the solution, then that person must get out of check on his next move.

There is only one solution in this one. In solving a problem like this, you must try to visualize the mating position. After staring at it for a while, you might notice the following sequence: 1. pass Nd6 2. Be8 Nb7 3. Kf7, leading to this position:

Now, if white could pass, the solution would conclude with 4. Qg6 Nd8 mate: 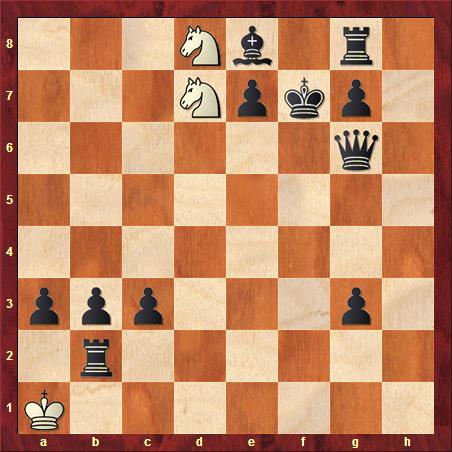 Sadly, the rules of chess do not permit white to pass. And he has no waiting move with which to mark time. Black, however, also wanted to pass. Which means that we can make this work, so long as black uses his first move to provide white with a waiting move at move three. It turns out that black has exactly one way of doing that.

The solution is to start with 1. Rc2: 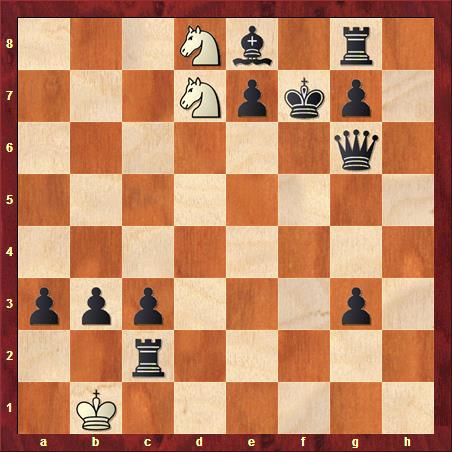 Very nice! The sole purpose of black's first move is to anticipate that his fourth move will cover b1, leaving white without a waiter at move three.

In previous entry in this series, I discussed the issue of making the genre fit the content of a problem. In the previous entry I showed how sometimes a selfmate problem is better cast as a stalemate problem. Something similar sometimes happens in helpmates. It sometimes happens that you feel like black and white are making their moves independently of one another. That is, you might imagine that black could make all of his moves at once, and then white could make all of his moves, with the result being mate.

This tends to make for a weak helpmate. In a true helpmate, you want white and black working together to achieve the goal. And that is what makes this week's problem so appealing. If you trace out the logic of why the white and black moves must be played in the precise sequence they are, you see the two sequences (white's moves and black's moves) are hopelessly intertwined. And that's a good thing!

See you next week.

It's been a busy few weeks. I hosted a Passover seder. (What? Atheists can't have seders?) Actually, I run a pretty laid back seder, all the more so this year considering there were goyim in attendance. It's mostly just a big dinner with some Hebrew and matzoh and charoset thrown in for fun.…

This week we have very clever helpmate from Russian composer Viktor Chepizhny, that was published in the November 2014 issue of The Problemist magazine. The diagram below calls for helpmate in two. There are two solutions: Recall that in a helpmate black moves first and cooperates with white to…

This is one where the explanation slowly improves one's appreciation of it. One question: what is the function of the black pawn on g3?

Without the black pawn on g3, the black rook would be able to provide the block on g6.

It's a rather unusual problem. The only point is really understanding the reason for black's obscure first move. But I like it a lot, and it won first prize in its tournament.