I love it when scientists say that! And, so said scientist Daniel Baker, speaking of a newly observed feature of the famous and well known, or at least, we thought well known, Van Allen Belts.

First discovered in 1958, the Van Allen belts have been thought to comprise two reservoirs of high-speed, electrically charged particles, corralled into separate doughnut-shaped rings by Earth’s magnetic field. The outer ring orbits at a distance of some 10,000–60,000 kilometres above Earth, and encircles an inner band of even more energetic particles, roughly 100–10,000 kilometres above Earth. ... that’s ... the structure that NASA’s twin Van Allen Probes recorded when they began operation on 1 September 2012.

But just two days later, telescopes on the probes revealed the emergence of an additional, narrow belt of charged particles sandwiched between the inner ring and a now highly eroded outer ring....

From the original paper:

Since their discovery over 50 years ago, the Earth's Van Allen radiation belts have been considered to consist of two distinct zones of trapped, highly energetic charged particles. The outer zone is comprised predominantly of mega-electron volt (MeV) electrons that wax and wane in intensity on time scales ranging from hours to days depending primarily on external forcing by the solar wind. The spatially separated inner zone is comprised of commingled high-energy electrons and very energetic positive ions (mostly protons), the latter being stable in intensity levels over years to decades. In situ energy-specific and temporally resolved spacecraft observations reveal an isolated third ring, or torus, of high-energy (E > 2 MeV) electrons that formed on 2 September 2012 and persisted largely unchanged in the geocentric radial range of 3.0 to ~3.5 Earth radii for over four weeks before being disrupted (and virtually annihilated) by a powerful interplanetary shock wave passage. 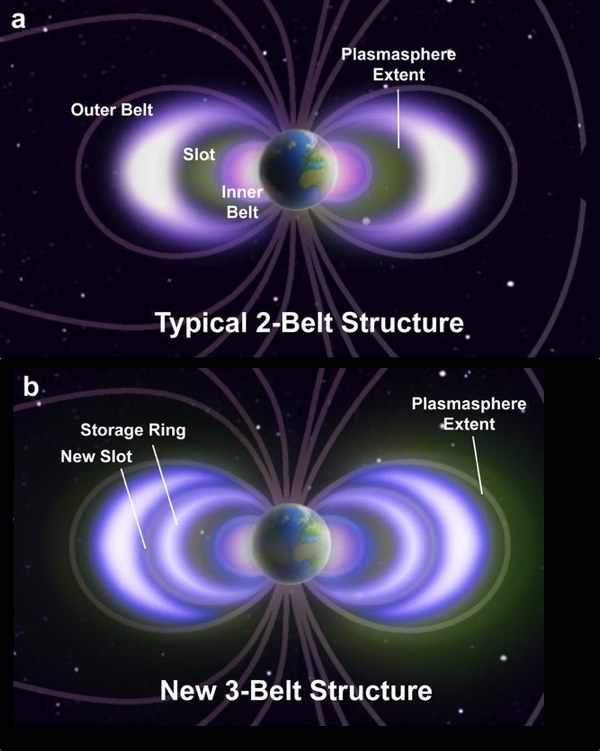 From Science: "Diagrams providing a cross-sectional view of the Earth’s radiation belt structure and relationship to the plasmasphere. (A) A schematic diagram showing the Earth, the outer and inner radiation belts and the normal plasmaspheric location. (B) Similar to (A) but showing a more highly distended plasmasphere and quite unexpected triple radiation belt properties during the September 2012 period. These diagrams show the highest electron fluxes as white and the lowest fluxes as blue. The radiation belts are really ‘doughnut’ or torus-shaped entities in three dimensions. The Earth is portrayed at the center. Also shown, as a translucent green overlay in each diagram, is the plasmasphere."