As noted a couple of days ago, this was a big martial arts week at Chateau Steelypips, with The Pip's first-ever belt test on Monday, and SteelyKid testing for her brown belt tonight. Unfortunately, tonight was also a first, namely the first belt test she's failed.

This was, sadly, entirely predictable, as her teacher has really tightened the requirements for tests of late, and said a while back that they would be required to do not only the form for the belt they were testing for, but the previous belt, as well. And I've been trying for three days to get her to run through the red-belt form to refresh her memory. But she refused, and paid the price.

She did, however, bounce back pretty well and broke two (really thin) boards with a jumping back kick:

So, let's hear it for indomitable spirit. Also, I got this nice shot of her during one of the earlier stages of the test: 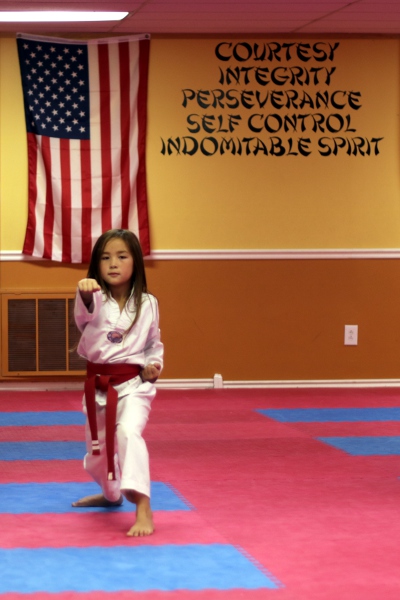 And that's the latest from here. A programming note, now: we're heading to Florida for a few days, leaving absurdly early tomorrow morning. I'll be taking the camera, of course, and will be taking pictures, but I can't swear I'll have time to edit and post them. In which case you may get a giant photo dump next week when we're back. You'll just have to wait and see...