Neil Tappen is probably most well known for having worked out the species and distribution of species in Central and western East Africa in the 1950s, as everyone who has worked in the area since then, from Jane Goodall to Richard Wrangham, has used his work as a tool in their own study of apes and monkeys of the region. He also worked on bone growth and development and taphonomy. Many others know him for his teaching and training of students, of which there were many. If you are reading this blog, you probably know or at least know of Genie Scott, for example. Neil was her undergraduate professor. 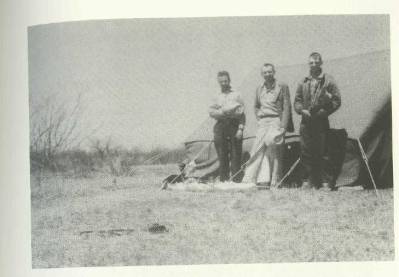 Searching for Dinosaurs at Waggoner Ranch, 1951. Neil Tappen is on the left.

I know Neil as my ex-father-in-law and as the grandfather of my daughter Julia.

Neil died on August 18th after a couple of weeks struggle with a series of medical issues precipitated by a bad fall, which in turn was precipitated by a series of medical issues, all typical of someone 100 +/- 5 years in age. As far as I know he was about as sharp as always right up to that time, though with failing eyesight it took him much longer to devour his usual giant stack of reading every day.

The most important thing I can tell you about Neil, if you didn't know him, is this: He understood the idea of living in interesting times, and he paid attention to what was interesting about his own times.

My deepest condolences to you and your daughter. A Giant has left us bereft.

Very sorry for your loss Greg - he lived a long and very interesting life though and no doubt passed that spirit on to family and students alike.

I was a student of Dr. Tappen. I spent hundreds of hours in scholarship with him and his fantastic sense of humour. One thing I can remember is that I take lithium, and in his lab he had many, many, bottles labeled with arcane substances and one of them was lithium carbonate. He considered taking it away so I wouldn't get into it.

He told me all about his trips to Africa and South America. In Africa, the Cercopithecus monkeys had very long tails which hung down from trees in the forest which is how he got a bead on the monkeys.

One funny story he told was about a, I think, Professor of Mathematics who flipped out from his studies and blamed some other professor. He sent a box of Godiva Chocolates to the man's house whom he blamed, and the wife ate some and got very sick. The police grabbed the Mathematician and he is in prison now. So we were wary of Godiva Chocolates from that point on.

I was very close to him, even taking my kids to visit him at their house in Milwaukee many times, and I sincerely regret not having contacted him or visited him since he moved to Minnesota. I give my condolences to you, and I have missed him so much since he moved, and now I will miss him eternally.

Liza, when were you at Milwaukee? I was there for one year during the 80s.

The Godiva Chocolate story is a bit different. Neil knew the perpetrator, who was an anthro prof at NYU. He had his students unwittingly making LSD in his lab. He got busted and sentenced to life in prison.

Much later, when nearly dead of AIDS, he convinced the powers that be to let him out for a weekend to see an opera in Chicago (he was incarcerated in Wisconsin, I think). They let him go . While he was free, he put into place a diabolical plan he had been working on, from prison, for years.

He procured a wide range of effective, exotic poisons. He got the chocolate. He put different poisons in all the different chocolate. He sent them to the jury, judge, prosecutor,etc. It was around Valentine's day, so it was not odd to get a box of chocolate in the mail.

The judges wife was the first person to open and eat the chocolate. She became ill (she survived) but the authorities put 2 and 2 together very quickly (I guess they expect retribution attacks on federal judges) and intercepted the poisoned chocolates that were sent to all of the others.