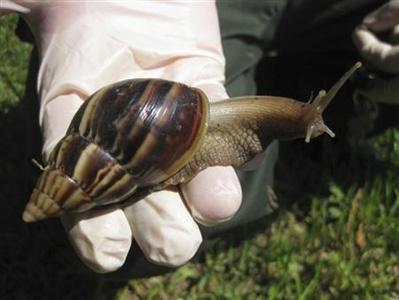 Image of a Giant African land snail from a Florida Department of Agriculture Division of Plant Industry handout.

Giant African land snails, like the one pictured above, are reportedly "one of the world's most destructive invasive species" as they not only consume over 500 plant species, they can actually eat stucco (apparently a good source of calcium). Therefore, I am sure you can imagine the damage they are causing in South Florida where they can grow as large as a rat. Since 2011 when the snail was first seen, more than 117,000 have been captured in Miami-Dade County.

More problemmatic, with the growing infestation, is that the snails can carry a parasitic worm that can lead to a type of meningitis in humans, although there have been no confirmed cases in the United States.

by Kim Krisberg Earlier this month, Florida lawmakers wrapped up their latest legislative session. And nearly 500 miles south of Tallahassee in Miami-Dade County, workers' rights advocates breathed yet another sigh of relief. Ever since Miami-Dade adopted the nation's first countywide wage theft…

Public health vs. the mosquito: Pushing back against dengue

by Kim Krisberg A couple weeks ago on the southern-most tip of the continental United States in Key West, nearly 70 residents gathered at a town hall meeting to talk about mosquitoes. And not just any mosquito. A special, genetically modified mosquito designed to protect people's health. While the…

The ethics of snail eradication.

In the comments of one of my snail eradication posts, Emily asks some important questions: I'm curious about how exactly you reason the snail-killing out ethically alongside the vegetarianism. Does the fact that there's simply no other workable way to deal with the pests mean the benefits of…

This morning, the Florida Department of Health reported a “high likelihood” of the first localized transmission of Zika virus from mosquito to person in the United States. Up until now, the more than 1,600 documented Zika cases in the continental U.S. have been related to travel abroad; however,…

Florida's Lucullan gourmets shhould be hailing the arrival of the slowest and most expensive fast food in the history of Rome .

By my eyestalks, those are some good-looking molluscs!

House eating snails??? I sure hope they do not migrate to Minnesota. Are the dangerous to humans? What are they going to do to fix the problem? This seems like it could begin to be very dangerous.

What are they like fried in butter with garlic?

House eating snails?? How interesting. You would think that the stucco would also have chemicals that would be harmful to these snails. I wonder what would be some ways to prevent them from spreading to other areas.

One of the nurseries i frequent has had a dead example of one of these critters so we can all be on the lookout for them.
It seems they hitchhike in from Africa and other places in the pots that the imported plants come in. Possibly the animals themselves, possibly just the eggs.