New book on sexuality in the animal kingdom

I was just digitally flipping through a new book called "Crime Against Nature", which describes various reproductive behaviors in the animal kingdom. It is written by an artist, Gwenn Seemel, not a scientist, so I cannot vouch for the scientific accuracy of the book as a whole. However, the illustrations are quite nice and the content is seemingly scandalous, which makes for an interesting read.

For example, did you know that male Dayak fruit bats can lactate to feed their young (True according to this article in Nature)? 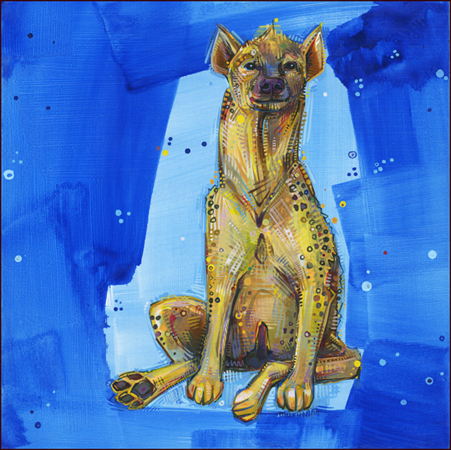 Image from "Crime Against Nature", written and illustrated by Gwenn Seemel.

However, the notion that female spotted hyenas have a "penis" is not entirely accurate. It turns out that high-ranking alpha female hyenas are very aggressive and provide their developing offspring with higher levels of androgen (male sex hormone) than lower-ranking females in late pregnancy. This androgen boost increases the offspring's chance of survival as it makes them more aggressive at fighting for food and at mating earlier and more often than those receiving less androgen.  The problem is that the high androgen levels damage the mother's ovaries and cause her clitoris to enlarge (up to 7 inches), thereby resembling a penis. Since the opening of the vaginal canal is at the end of the clitoris, it makes birthing a 2-pound cub through a 2-inch canal dangerous and often fatal for first time mothers. (Source: Michigan State University press release).

Hmmm. Technically and anatomically a clitoris is a penis. Same structure. Like male nipples. I would certainly triple check before buying the notion that babies are delivered through the clitoris.

Wow that was unusual. I just wrote an incredibly long comment but after I clicked submit my comment didn’t appear. Grrrr… well I’m not writing all that over again. Anyway, just wanted to say fantastic blog!...

If it's still a clitoris, then it doesn't have an opening in it. If the urethra's moved up and merged into it, then it is a penis.