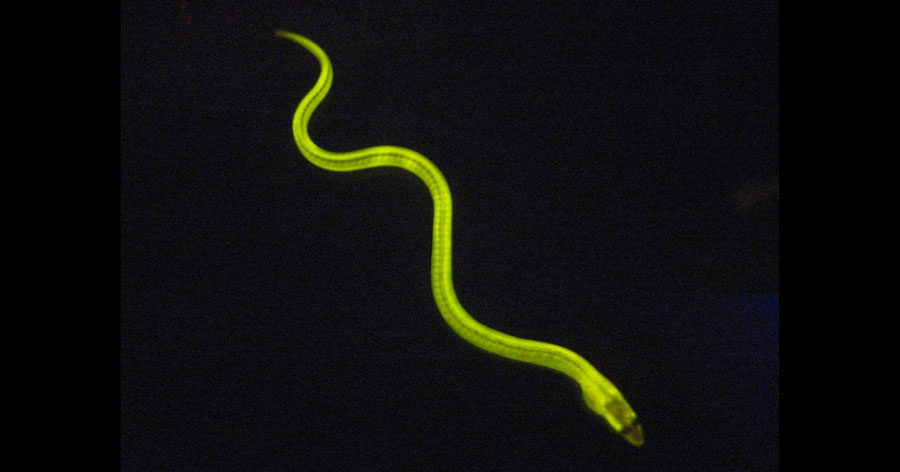 Dr. Miyawaki from the RIKEN Brain Science Institute in Wako, Japan and colleagues have identified the first example of a muscle protein in Japanese freshwater eels (Anguilla japonica) that fluoresces under special circumstances that may lead to improved medical testing (photo above).  The researchers have isolated the protein they named UnaG (after "unagi", the term for freshwater eel in Japanese). What is unique about this protein is that it fluoresces under low oxygen conditions and when it binds to bilirubin, a byproduct of hemoglobin that is a common marker physicians measure for  liver health. Therefore, the discovery of this new protein may lead to better medical testing for bilirubin.

The muscle protein also fluoresces when exposed to blue light, which is how food chemists Seiichi Hayashi and Yoshifumi Toda from Kagoshima University in Japan discovered it in the popular sushi meat.

I love fish. The diversity of these aquatic creatures is so vast, I find them fascinating. Take the eel for example: Image of a Japanese eel (Anguilla japonica) by opencage, CC BY-SA 2.5, https://commons.wikimedia.org/w/index.php?curid=14520151 In a study published this month in the American…

When did insects evolve?

Just consult the chart. Dated phylogenetic tree of insect relationships. The tree was inferred through a maximum-likelihood analysis of 413,459 amino acid sites divided into 479 metapartitions. Branch lengths were optimized and node ages estimated from 1,050,000 trees sampled from trees separately…

Climate Change and the Integrity of Science

Science has published a letter with 250 signatories protesting the recent and extreme attacks on scientists, climate scientists in particular. I agree with Michael, this letter should not be behind a paywall. I think the fact that it is, is disturbingly revealing of the disadvantage science has…

I love Unagi, but I'm not sure about fluorescent eel. It's sure pretty to look at!