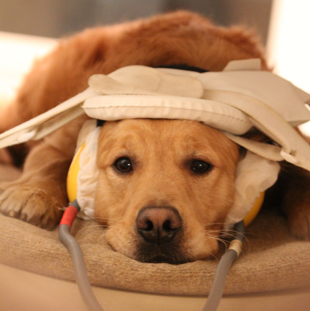 A golden retriever in a fMRI scanner. Image by ENIKO KUBINYI from The Scientist.

A paper published in Current Biology describes research using functional magnetic resonance imaging (fMRI) to compare the sound processing regions of brains in humans and dogs (border collies and golden retrievers). The subjects listened to almost 300 sounds (vocalizations from dogs and humans as well as non-vocal sounds) or no sound as a control. They used the fMRI to locate sound-sensitive regions (auditory cortex) in the human and dog brains. Not surprisingly, the human auditory cortex was mostly (87%) sensitive to human vocalizations. In contrast, the dog's auditory cortex was mainly responsive to both dog vocalizations (39%) or non-vocal sounds (48%). Interestingly, both dogs and humans appear to process positive and negative vocal emotions quite similarly, which may be a reflection of thousands of years of co-existance. Although comparisons with other species would help to confirm whether this is common among mammals.

The ultimate goal is to find out whether dogs can understand human language or whether they just hear sounds.

ISTM that dogs (my experience, anyway) get to understand certain sounds (vocalizations) that we make repetitively, which we call words, that mean specific things... so why the question?

Vocalizations ARE (do become) language, after all.

Yes, we know that dogs process social inputs including vocalization, but what's new is that we're finding the mechanisms for this and the resemblance with those in humans.

A surprisingly large amount of the content of vocal communication is carried by nonverbal components such as intonation and rhythm. This is easily illustrated by the long-standing observations of internet communication misunderstandings, and by the inability of most popular song lyrics to stand up as meaningful poetry in written form.

What I find interesting about the present line of research and similar ones, is that it all converges on the conclusion that there is much common ground between humans and other animals. The more we look, the more we discover that we differ in various degrees but not in kind. The days when one could assert that humans are unique and superior, that other animals are not conscious etc., are behind us.

And it would be merely stating the obvious to note how darn cute those dogs are in the photos.

As time passes by we often discover new information about the humans and other species. I personally have observed that as much as dogs are not humans, they do have similarities. We can compare dogs to 'babies', for a baby to learn and understand something, one has to say the words repeatedly, for instance 'sit' ,it will take the baby a while to understand what you mean by sit and even faster when you demonstrate it, just like dogs they understand when they are taught. In conclusion we could say dogs do have similar characteristics some to humans but they still they cannot be classified under the human species because their differences overcome their similarities. (u14146470)

As time passes by we often discover new information about humans and othe species. I personally have observed that as much asdogs are not humans, they have similarities.

We can compare a dog to babies, for a baby to learn and understand something, one has to say the words repeatedly, for instance 'sit' it will take time for the baby to get idea, but the mother can speed it up by demonstrating what they mean by sit, the same way is used on dogs, dogs can understand human vocals and sounds only when they are used often.
In conclusion we can say dogs and humans have same similarieties but this does not mean we can classify dogs as half-humans as their differencies tend to overcome their similarities.

I have often wondered if dogs can understand us. From my experience with dogs I believe it may be possible. Dogs sometimes amaze me with their actions in response to our words. It may just be in response to the tone of our voice OR dogs may associate meanings of some words to those words because they have experienced what happens when that word is said. Dogs are very intelligent and I believe it may be possible for them to learn a language like humans do. Much like P Sibanda said. It depends on how much the dog has had contact with humans and their language. A dog that is treated like a member of the family will be more responsive to words, while dogs with less contact will be less responsive. This blog was very interesting and I hope we will be able to answer the question of whether dog understand us or not in the near future.