This week is Union's spring break, and like basically everything associated with Union's academic calendar, it's too short. I have to turn in my Winter term grades today, and next Monday is the start of my Spring term class.

I also find myself in a place right now were every little thing is pissing me off, which is a terrible place to start the Spring term. And since social media functions largely as an aggravation engine right at the moment, that means I need to step back for a bit. So, don't expect much of anything here or on Twitter for the next week at least. We'll probably still do Uncertain Dots tomorrow, but other than that, I'm going to unplug as much as I can and focus on getting the book out the door and recharging my mental batteries before the new term. Otherwise, I'll throttle somebody before the third week of class.

But here's some cute stuff to hold you over. Up top is a picture of SteelyKid at the Albany Institute of History and Art, where they're showing a couple of mummies that they happen to own. (I would link to the exhibit page directly, but it features a loud auto-playing video, which will weigh heavily on the hearts of those responsible when they reach the afterlife, and they'll be fed to the eater of souls.) A week ago, she randomly asked to go see mummies, and we tried to head down there, but were thwarted by the St. Patrick's Day parade in downtown Albany. So we went again on Saturday, where she was so hyped that I didn't really get to read any of the exhibit labels, but generally enjoye dthe exhibit. The picture is a replica of King Tut's throne that they have set up in the entryway for exactly this kind of photo op.

And, for balance, here's a shot of The Pip singing "The Wheels on the Bus" accompanying himself by strumming a Duplo base plate: 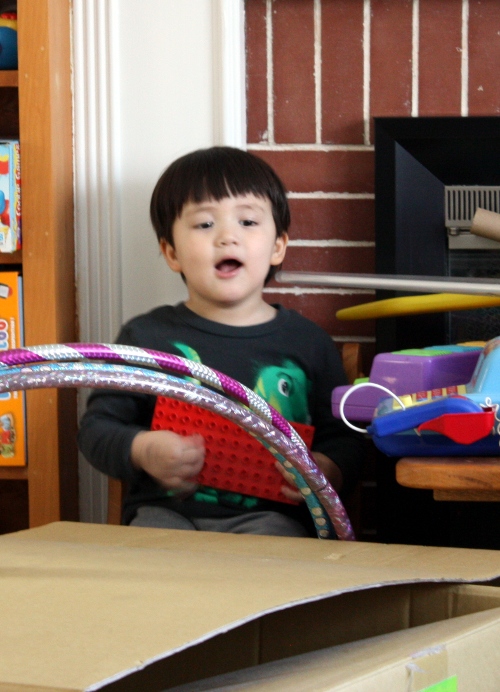 The Pip is the Stevie Ray Vaughn of the Duplo base plate.

He also knows the alphabet song, and would mix that in occasionally. What, you say the picture isnt cute enough? You want video? Very well, have some video:

And if you see anything cuter than that this week, I don't want to know about it.

Look at "heathen" sculpture retrieved by Europeans. There is a remarkable incidence of nose-whacking. The One True Church knew that breaking off the nose removes the magic from a sculpted likeness.

Steely Kid's got a notably good "Bring me their heads!" pharonic look going on there.