Today is Father's Day in the US, so I got a bunch of little gifts from the kids. The Pip's was just a construction-paper card mostly made by his teachers, with a bit of scribble on it. SteelyKid's, though, included a fill-in-the-blank booklet that she wrote on and drew pictures to go with.

Some of the pictures are extremely detailed and colorful, such as this one where she describes a conversation we have Every. Single. Night.: 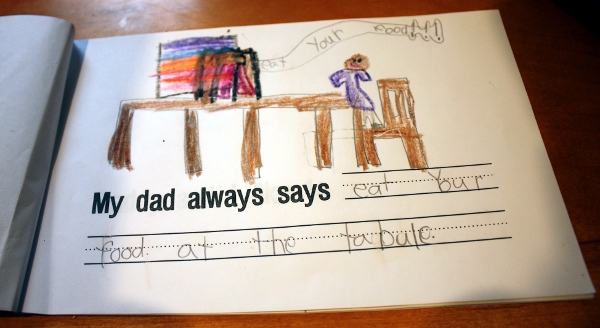 SteelyKid's extremely detailed depiction of a conversation we have every night.

(SteelyKid is a terrible eater, and it's a struggle to get her to eat anything. She'll find all sorts of things to do other than eating her dinner-- asking for more drinks, long trips to the bathroom, telling elaborate stories...)

There's also this tribute to my being the biggest and the strongest (though I do sometimes exercise, I swear): 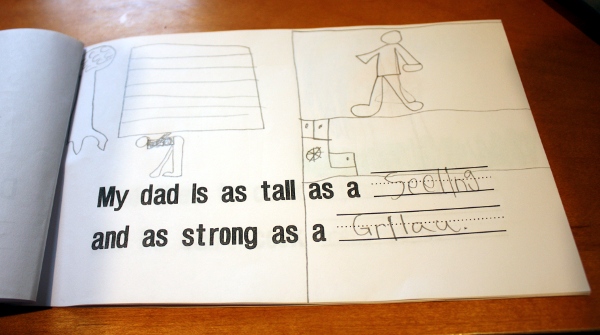 according to SteelyKid I am as tall as a seeling (ceiling) and as strong as a grilau (gorilla).

I'm as tall as a ceiling and as strong as a gorilla. She made a valiant effort to sound out both of those words, ending up with "seeling" and "grilau." I admire the fact that she didn't shy away from tricky words, and kind of amazed that they have kindergarteners doing that sort of thing these days.

(What really boggles the mind is her math-- she's already doing proto-algebra ("What plus 5 is 13?" and "20 minus what is 16?"). I'm going to be teaching her about differential equations in middle school, at this rate...)

But, of course, the highlight of the whole booklet is: 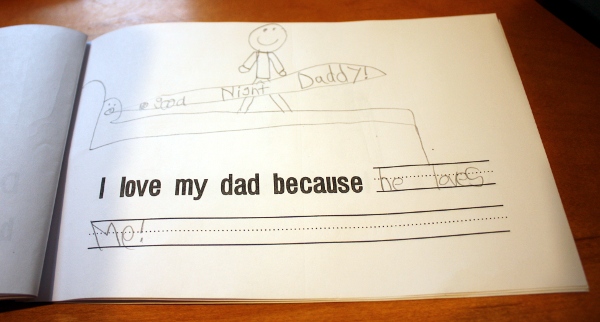 Really, there's not much to say to that beyond "Awww...." As frustrating as dinner time sometimes gets, I really do have pretty awesome kids.

Of course, whatever good things I do as a dad, I'm copying from my own father, shown here with The Pip a few weeks back: 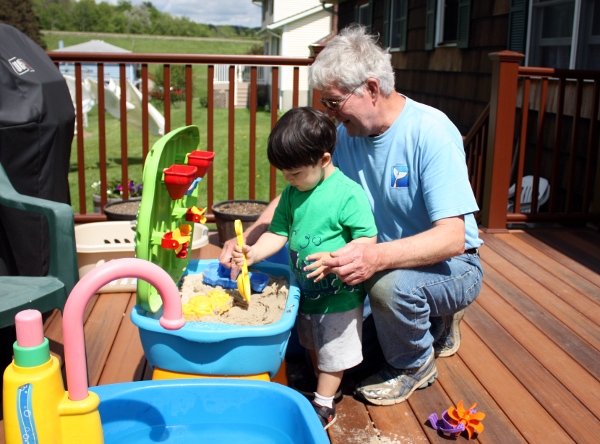 Grandpa offering The Pip advice on the best way to dig in the sand.

So, thanks, Dad, and Happy Father's Day to all those who would be likely to appreciate such wishes. The rest of you, have a nice Sunday.

As promised/threatened in the previous post, here's a big collection of shots from our cruise vacation featuring the sillyheads. 243/366: Bunk Beds: SteelyKid and The Pip like the bunk beds in the stateroom. The sleeping arrangements in the stateroom were pretty slick. We had a double bed that…

At SteelyKid's softball game today, the Pip provided an ideal cute-kid photo to use as a springboard to some SCIENCE! Or at least, a graph... Anyway, here's the Little Dude showing off how tall he's gotten: The Pip under Kate's coat. OK, really he's hiding under Kate's raincoat (after two…

SteelyKid's first-grade class has been doing a bunch of Thanksgiving stuff. A lot of this is the lies-to-children version of the first Thanksgiving, and some of that is a little dubious (they had a dress-up "feast" on Tuesday, where SteelyKid was an Indian with a construction-paper vest and…

Why not teach her quantum mechanics before she develops a Newtonian intuition?

I particularly like her caricature of you at the dinner table. Is that how your students see you when you say "do your homework"?

Love the comment about your dad. Truer words were never written than those.

Not a criticism, since I remember being forever mortified at something with spelling like that being posted forever in the room we stayed in at my grandparents farm, but my brain insists on making this connection: Tom Lehrer would say she must go to a "progressive" school! Now I wish I had that drawing or a photo of it. Save the pictures of it even if you don't save everything.

Yup, they really are doing "sound out the spelling" in kindergarten these days. My daughter hasn't quite caught onto the "double vowel" rule for long sounds (e.g., her owl Swoops is spelled "Swops"), but the fact that she, and her cohort, are doing it at all impresses me.