Both SteelyKid's elementary school and her after-school day care had "book fairs" this week. These include a bunch of display cases full of books at various reading levels, and also a couple of tables of plastic toy crap. One of the marginally less crappy plastic toys was a marker with ink that fluoresces in UV light but is otherwise inevitable, and SteelyKid kept bugging me to get one of those. I eventually caved, because it required only loaning her one dollar to supplement her allowance, and it was worth a buck to me not to have to listen to the complaints that would've ensued otherwise.

Of course, part of the reason she wanted one is that one of her classmates had gotten one, and they played with it at day care. Where she let him draw a mustache on her face with it: 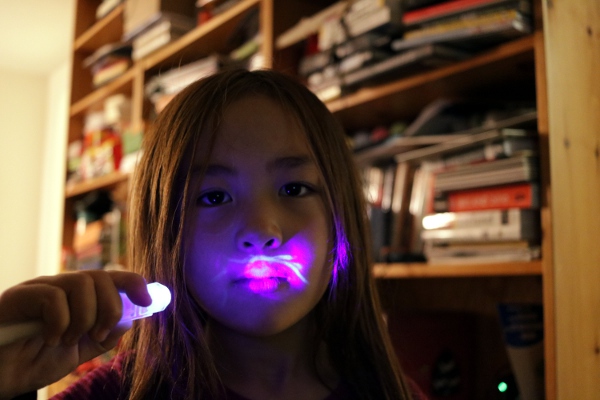 SteelyKid showing off her ultraviolet mustache.

I guess I should maybe email her friend E.'s father and let him know to be ready for invisible face tattoos come next Monday, when SteelyKid has a UV pen of her own...

(The OBPhysicsNerd note for this: It's interesting how much more brightly this shows up on the camera than just looking at her. To the naked eye, this looks like a thin blue-white line over her lip; the garish pink and purple isn't visible at all. Which tells you something about the spectral response of the camera sensor, I guess-- maybe I'll take the pen over to campus one of these days and point a spectrometer at it...)