It's been a couple of weeks since my last photo-a-day post, for a variety of reasons. First we were in Florida, then Emmy died, then I had some disk space issues that kept me from getting photos off my camera. That's all sorted at last, just in time for me to leave town again...

In an effort to catch up a bit, I'm going to dump several photos at a time into a couple of posts. This one will be a total of eight days' worth of pictures, covering our trip and a few days after. I've got several gigabytes of trip pictures, but almost all of those include the kids, and again, I'm trying not to have this be the "Cute Kid Photo of the Day," so with one exception, I'll keep it to things that aren't them: 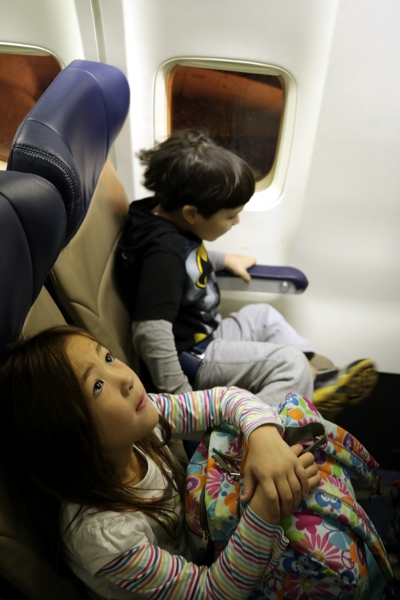 SteelyKid and The Pip in their seats on the plane to Florida.

I like the way this basically captures their approach: SteelyKid waiting calmly for the point when she could pull out her tablet and watch cartoons, and The Pip so fired up I couldn't keep him in focus.

102/366: The first day we were in Florida, we went up to the zoo in Tampa, where they do a special Christmas light show in the evenings in December: 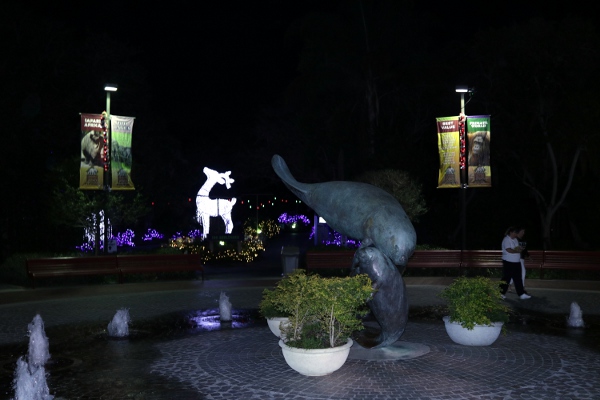 The manatee fountain and Christmas lights at the zoo in Tampa.

I like the combination of the very Floridian manatee fountain and the incongruous lighted reindeer. I don't quite know what I think they ought to do instead, but I always find the winter-based Christmas iconography kind of weird in Florida... 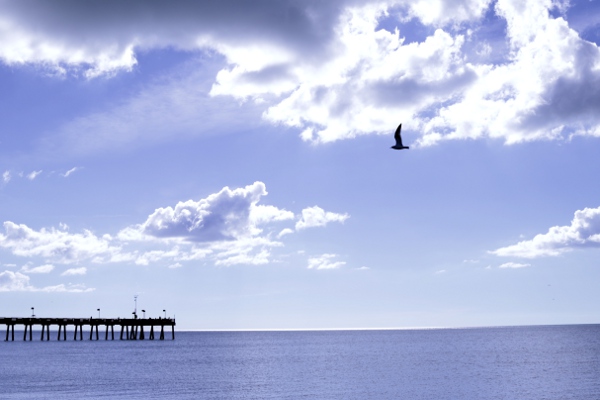 A gull soaring over a beach on the Gulf coast of Florida.

This was a little less of a contrast than in some past years-- it was in the 60's at home-- but still nice to be at the beach in December.

104/366: The next day, we went on a cruise around the harbor in Port Charlotte looking for dolphins. We didn't manage to find dolphins, but did see somebody flying a biplane, of all things: 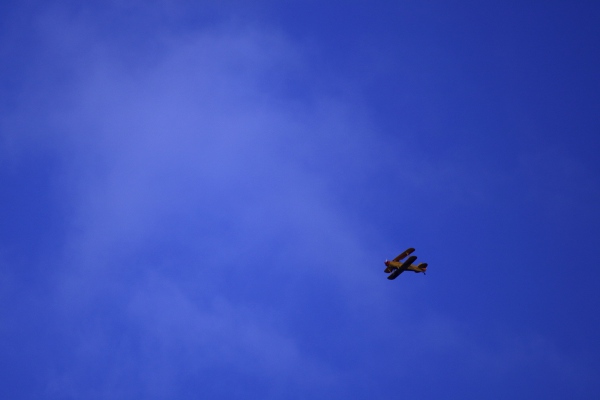 A biplane in flight in Florida.

You don't see that every day.

105/366: On our last day, we went and played a little miniature golf. The course was home to a substantial number of lizards, like this black-and-red guy spotted sunning himself: 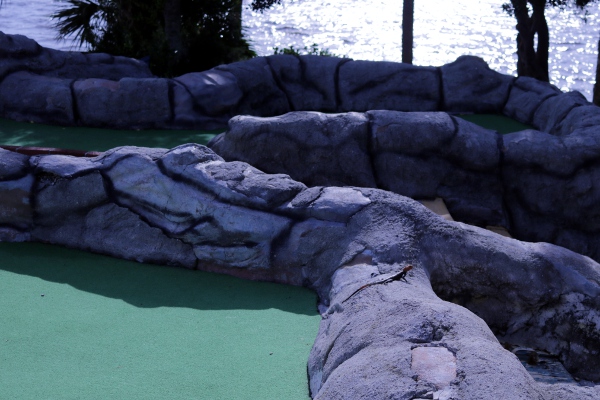 A lizard on a rock at the miniature golf course.

106/366: On our return, SteelyKid had to finish her homework from the previous week, making a cardboard building to contribute to the model city her class was making: 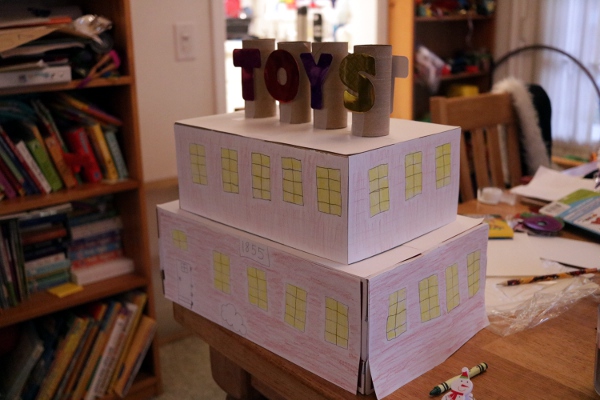 She drew the windows and doors and so on while in Florida, on bits of card stock that I had cut to fit a couple of shoe boxes. We colored these at home before school on the first morning back, then taped them to the boxes. I think it came out pretty well, considering all the constraints we were working under...

107/366: The next day was the unveiling of the city, in SteelyKid's second-grade classroom. I got a whole bunch of pictures, but they mostly include other people's kids, and I make a point of not posting photos of other people's kids if I can avoid it. So here's the vote tally from when they decided on the name for their city: 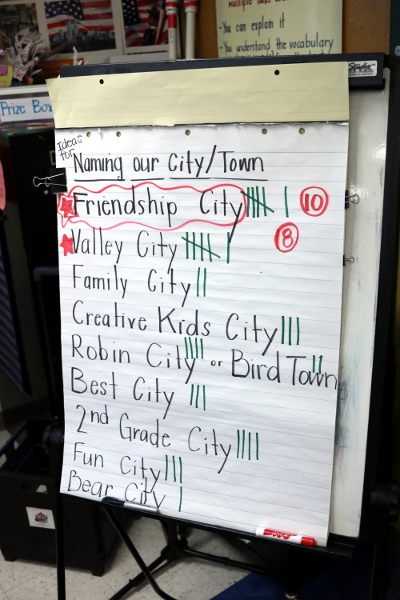 108/366: This was the Thursday after Emmy died on Tuesday night, and what with one thing and another, I didn't take any photos that day. I could maybe fish something out of the extras from the others, but I did engage in a bit of visual art that day, so I'll post these instead: 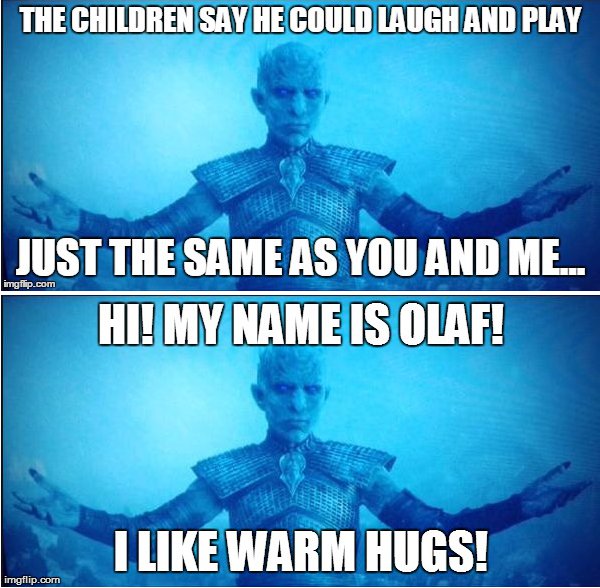 I was in a weird place, okay?

Anyway, that gets me a week closer to being caught up. Which I'll promptly squander by going away for several days of Christmas festivities, but, you know, you take what you can get.

Reindeer and snowmen do look out of place in Florida. In Kure Beach, NC (at least in 2006) had anchors, shells, and seahorses for their Christmas lights.

The association of Christmas and snow dates back to Charles Dickens' day. Back then, the Thames routinely froze over, even in central London. That's not true today--southeast England is one of those places that shuts down on the rare occasions when they do get snow.

The reindeer are a natural result of placing Santa's headquarters in northern Finland, as many Europeans do. (How we Americans turned that location into the North Pole, I have no idea, but I suspect somebody could get a masters thesis out of it.) Reindeer are not only native to the area but are routinely domesticated, so of course Santa would have several crews available to pull his sleigh. My parents used to claim that Santa would switch to a golf cart somewhere along the way in order to cover Florida.