Sunday and Monday were wrecked by SteelyKid getting sick. She was actually only really ill on Sunday, but that was highly miserable. Monday, she had to stay home from school, and we spent the day watching the original Star Wars trilogy (which she had refused to watch on two previous occasions...). So, there weren't a lot of pictures taken on those days...

Since I'm pulling a couple of photos from other days to compensate, I'll just do a thematic group of shots of wildlife. I slapped the telephoto lens on the camera the other day, and took advantage of the sudden onset of summer weather to get shots of various living things in the neighborhood. 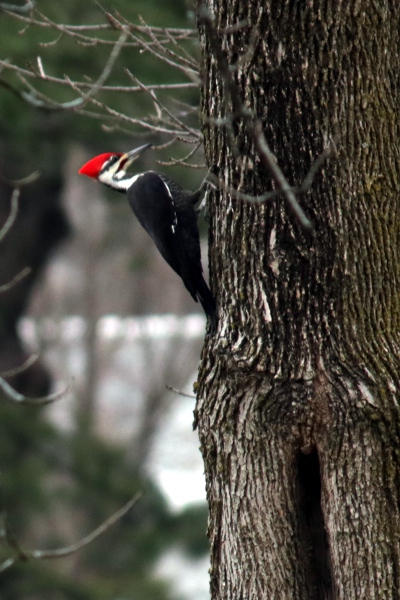 Profile shot of a woodpecker on a tree across the street.

I've featured a couple of previous shots of the neighborhood woodpeckers, but this was a really good angle on one. Also, it was what got me to pull out the telephoto lens in the first place, so it gets pride of place. 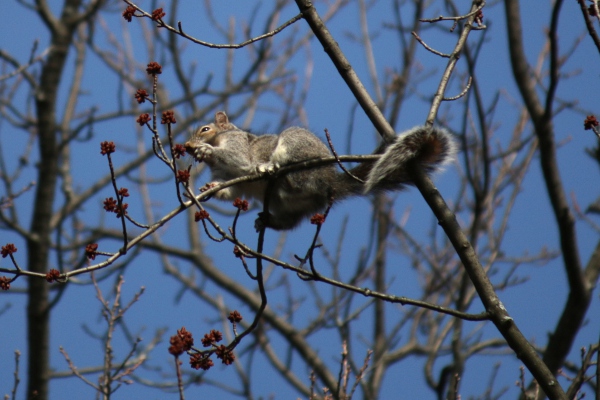 A squirrel high up in a tree.

I needed to go to the post office a few days ago, and it was a beautiful day, so I walked and took the camera with me. This was probably the best shot from that walk, a squirrel way up high in a tree eating some sort of fruit-like thing that I think is left over from fall, not a new bud. 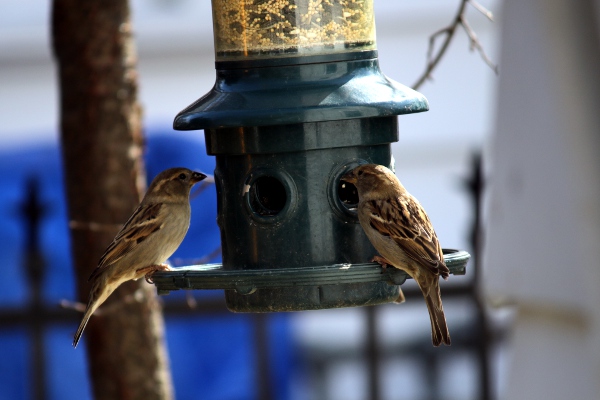 Little birds on the feeder.

We have tons of birds around, because we have a hanging feeder outside the dining room window, and mostly remember to keep it stocked. Most of the visitors are either big nasty grackles, or these little brown-and-white guys. 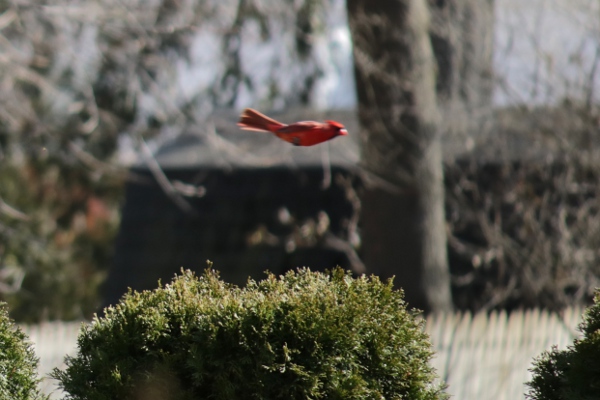 There are a bunch of cardinals in the neighborhood, and they have both a nicer song than most of the other birds and a cooler overall look. They're skittish as hell, though, so it's hard to get good photos. This one was clear on the other side of the neighbors' yard,and didn't stay there for long. I got this wings-folded shot as it took off, though, and I like the way it looks like it's levitating...

So, there you have the best of my recent amateur wildlife photography.

These guys aren't technically rare, but they're far from common where I live (southern CT). Plus: super-shy. You just don't see them much. And they're especially cool, due to great coloration, and honkin' big SIZE. About the size of a crow.

I can't identify your sparrows, because there are sooo many sparrows, and they differ in sometimes subtle ways. I can tell which sparrow's they're not, but not which ones they actually are.

(Bird nut, in case you haven't noticed yet.)

Rosemary, yes, I was the one who spotted the woodpecker and was surprised at its wingspan!

Right now is a difficult time to ID some birds. It gets easier when they are in breeding plumage. Once you ID what lives in your yard, you can follow the coloration changes as they molt from season to season.

First, a link to a useful page on the Cornell "All about birds" web site that hosts the Great Backyard Bird Count. Partway down the page they have a link with ID comparisons for a variety of common sparrows.
http://gbbc.birdcount.org/learn_about_birds/

They also have a page that allows you to sort common backyard birds by location, season, and (most importantly) type of food and feeder.
http://feederwatch.org/learn/common-feeder-birds/

The Merlin bird ID app is even better, since it works its way through a set of keys on size and color.

You can sometimes locate a Pileated by the loud knock or drumming sounds it makes to communicate. Cornell has good sound files if you or the kids want to explore that.

The "little birds" certainly look like female house sparrows (aka English sparrows). They are rather variable in appearance. The Audubon site has a better pic of a female than the Cornell site.