The Most Important Day of the 21st Century

One day, sometime around the middle of this century, during the lifetime of people now alive, the population of the planet will be smaller than it was the day before. Global population growth is slowing, will level off, and one remarkable day, decline.

This day will mark the dividing line – the definitive transition – between a world dominated by the concept of exponential, inexorable growth to one that has the opportunity to come to grips with true long-term global sustainability.

Ever since the dawn of humanity, the population of the planet has been growing (ok, some quibblers may point out that disruptions like the Black Plague or the Dark Ages may have briefly interrupted this inexorable growth, but they were blips in the long history of exponential population growth – see Figure 1). Our institutions, theories of resource use, and economic policies and concepts are all based on an assumption of continued population growth. 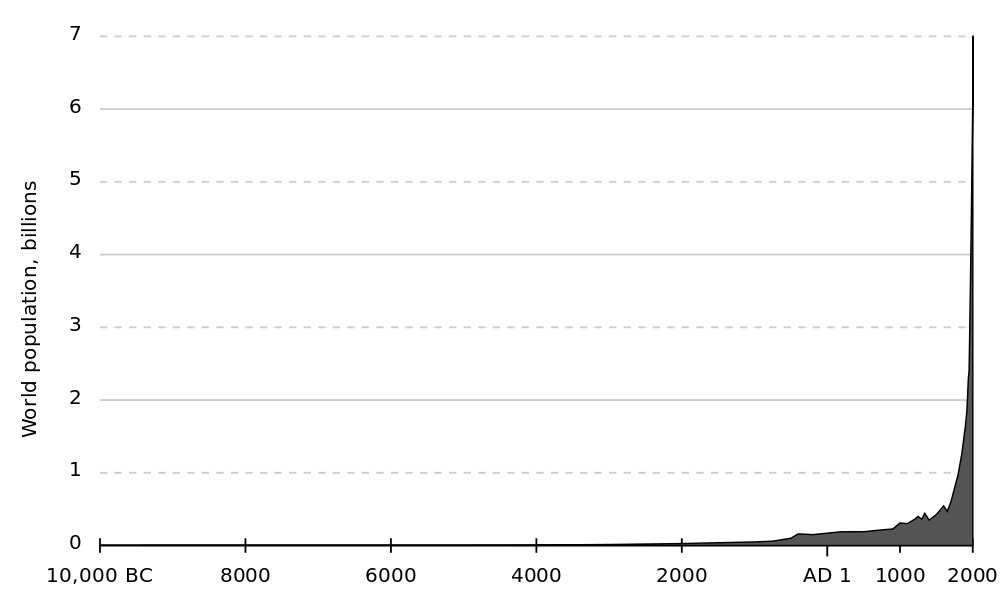 Figure 1. World human population (est.) 10,000 BC–2000 AD. Source: originally uploaded to en.wikipedia based on the "lower" estimates at census.gov.

The threats of continued population growth have long been clear: unsustainable use of resources, the challenge of meeting basic human needs for water, energy, and other basic resources, fundamental disruption from now-unavoidable global scale climate change, and the economic challenges of providing jobs, housing, education, water, energy, and transportation infrastructure for rapidly growing populations. These problems are especially severe in poorest regions of the world and the rapidly growing urban areas receiving a massive influx of young people from rural areas.

It is no surprise that some of the greatest remaining challenges with poverty are in precisely those regions where population continues to grow the fastest: parts of Africa and the Middle East. Table 1 shows those countries with population growth rates higher than 3% per year.

Table 1. Countries/Regions with population growth rates higher than 3% per year, 2011

But the rate of population growth is slowing, as the education of women expands, health care improves, knowledge about family planning expands, and economic growth improves living conditions. The world currently adds around 78 million people a year, down from over 85 million people annually around 1990. And one day the global population as a whole will begin to shrink.

This is something that crosses my mind often. I think there are multiple reasons why the population may be decreasing as you noted many in your article. I agree that women becoming more educated is a big reason as well as planned parenthood type programs all over the United States also play a role. I also tend to ponder the recent forthcoming's of gay marriage, i'm not for or against it in this situation as it is a whole other topic., but as it is becoming more legal throughout the states that gives more folks legal means to adopt children. So those that repopulate the earth will have more opportunity to find homes for children who need homes. This plays a role with planned parenthood as well so as you stated in your graphs and tables the declines in some countries then those who choose to marry the same sex can, instead of maybe using other methods of conception such as a surrogate, are able to have a better chance of adopting children from other places ; also slowing the population growth.
I also agree that we do need to be planning for the population decrease, but how?

actually, while Lithuania and Latvia has decreasing population. But -8,4% and -8.1% in that year was a result of harsh austerity measures (and those countries are now a role model for austerity success :)) ). People just emigrated.

Thank you for the clarification. There is some year to year variability. But the trends are the same.

I would have liked to see some comments on the influence of countries like India, China and the African Continent on population growth and decline. In Africa the message from the politicians and others about population is still; "the more the merrier". However, the more there are, of course leads to the the merry situation of poverty, hunger, conflict, and all kinds of depravation, poor education, poor health, squatter living conditions, land degradation etc