One especially disturbing example of a major conflict, with complicated but direct connections to water, has developed over the past two years: the unraveling of Syria and the escalation of massive civil war there. Syria’s political dissolution is, like almost all conflicts, the result of complex and inter-related factors, in this case an especially repressive and unresponsive political regime, the erosion of the economic health of the country, and a wave of political reform sweeping over the entire Middle East and North Africa region. But in a detailed assessment, Femia and Werrell noted that factors related to drought, agricultural failure, water shortages, and water mismanagement have also played an important role in nurturing Syria’s “seeds of social unrest” and contributing to violence.

Water has always been a scarce resource in the region – one of the driest in the world. Syria receives, on average, less than 10 inches of rainfall annually. All of its major rivers (the Tigris, Euphrates, Orontes, and Yarmouk) are shared with neighboring countries. And Syria, like the region as a whole, experiences periodic droughts. Over the past century (from 1900 to 2005), there were six significant droughts in Syria, where the average monthly level of winter precipitation dropped to only one-third of normal. Five of these droughts lasted only one season; the sixth lasted two. Starting in 2006, however, and lasting into 2011, Syria experienced a multi-season extreme drought and agricultural failures, described by Mohtadi as the “worst long-term drought and most severe set of crop failures since agricultural civilizations began in the Fertile Crescent many millennia ago”.

Robert Worth noted that this drought contributed to a series of social and economic dislocations. By 2011, the UN estimated that two to three million people were affected, with a million driven into food insecurity. More than 1.5 million people – mostly agricultural workers and family farmers – moved from rural regions to cities and temporary settlements near urban centers, especially on the outskirts of Aleppo, Hama, Homs, Damascus, and Dara’a.

As early as 2008, a diplomatic cable from the U.S. embassy in Damascus to the State Department in Washington warned of the implications of the drought, saying the population displacements "could act as a multiplier on social and economic pressures already at play and undermine stability in Syria." This warning was perceptive and prescient: some of the earliest political unrest began around the town of Dara’a, which saw a particularly large influx of displaced farmers.

The political problem was worsened by water mismanagement, poor planning, and policy errors. The al-Assad regime heavily subsidized the production of water-intensive crops, especially wheat and cotton, and farmers relied on inefficient flood irrigation systems. Groundwater supplies were reportedly overpumped unsustainably, leading to dropping groundwater levels and rising production costs. And water withdrawals upstream by Turkey for their own agricultural production in the southern Anatolia region cut surface flows inside of Syria even further. All of these factors contributed to growing economic and political uncertainty.

Another excellent analysis of the links between economic, environmental conditions and the political unrest was written in February 2012 by Suzanne Saleeby in Jadaliyya, a magazine from the Arab Studies Institute. Saleeby argued that:

"The regime's failure to put in place economic measures to alleviate the effects of drought was a critical driver in propelling such massive mobilizations of dissent."

The conflict in Syria has also seen the targeting of water systems. During fighting around the city of Aleppo in the fall of 2012, the major pipeline delivering water to the city was badly damaged. In September the city of about three million people was suffering shortages of drinking water. In late November 2012, anti-Assad Syrian rebels overran government forces and captured the Tishrin hydroelectric dam on the Euphrates River after heavy clashes. The dam supplies several areas of Syria with electricity and is considered of major strategic importance to the Syrian regime. And in February 2013, anti-Assad forces captured the Tabqa/Al-Thawrah dam, which is the largest hydrodam in the country and provides much of the electricity to the city of Aleppo.

Indications for the future are not promising: the region faces challenges posed by growing populations, the lack of international agreements over shared water resources, poor water management, and the increasing risks of climate change. A research paper published in 2011 suggested that climate change was already beginning to influence long-term droughts in the region by reducing winter rainfall (see Figure 1). That study suggested that winter droughts are increasingly common and that human-caused climate change was playing a role. Martin Hoerling, one of the study authors stated “The magnitude and frequency of the drying that has occurred is too great to be explained by natural variability alone.” 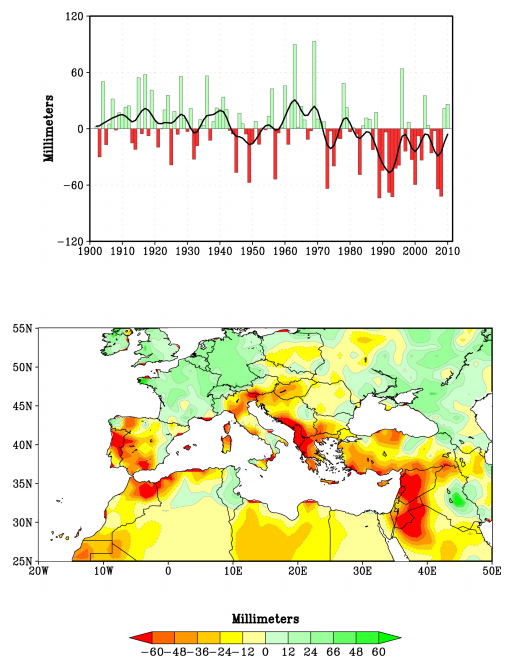 [Figure 1. Reds and oranges highlight lands around the Mediterranean that experienced significantly drier winters during 1971-2010 than the comparison period of 1902-2010. (Credit: NOAA)]

If we want to reduce the risks of local and international political conflicts and violence over water, we must recognize these risks and improve the tools needed to reduce them. And we need to stop assuming that our political stability is independent of what we do to our atmosphere or our water. It isn’t.

Meanwhile, Egypt's government is threatening war with Ethiopia over the latter beginning construction of a dam across the Blue Nile.

Yes, I just wrote about this last week, here on ScienceBlogs. Here is a link to the piece.
http://scienceblogs.com/significantfigures/index.php/2013/06/02/the-pro…

Thank you for bringing this up. This is what needs to be highlighted rather than the endless blather we're currently hearing about Al Qeada and insane muslims that want to kill each other.

Thanks for that link - I'm looking forward to the other posts promised about this situation.

Judging from the comments at your link, a lot of belligerence has already started building up...