Total Eclipse of the Heart Moon!

As Bonnie Tyler sang, and later The Dan Band (with more cursing),

Well, it isn't the heart, but this Wednesday night, beginning at 10 PM Eastern Standard time (8 PM my time, and 4 AM Thursday morning for my European readers), there is a total lunar eclipse. One of the things that's neat about a lunar eclipse, as compared to a solar eclipse, is that you can see it from everywhere on Earth at once! If you watch it, you'll see a full moon begin to be obscured, followed by it appearing faint and red during totality (which lasts about 50 minutes), followed by it coming out of shadow and becoming full again: 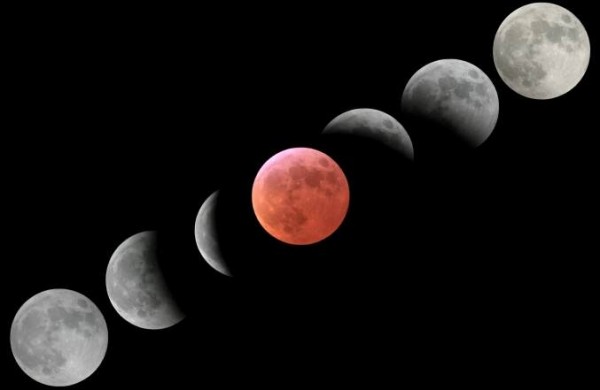 Now, if you're on a part of the Earth where the Moon casts a shadow, it will block out the sun entirely, leading to a total solar eclipse, and you would see something akin to the image at right during the few minutes of totality, where the Sun is completely blocked by the Moon, but the Sun's corona is still visible. 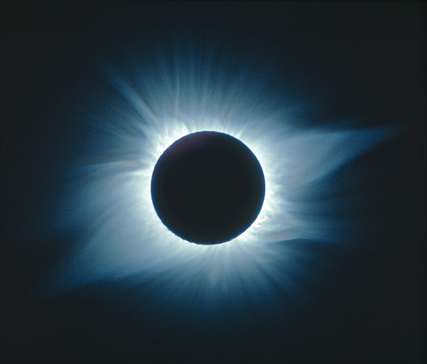 This shadow moves across the Earth's surface, and so a total solar eclipse is only visible from a small part of the Earth at any given time.

A lunar eclipse, on the other hand, is when the Earth passes between the Sun and the Moon, like so: 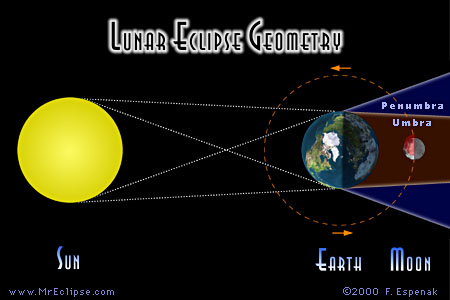 Now you can see, right away, that everyone on the night side of Earth will see the lunar eclipse! So it doesn't matter where you are: at 3 AM GMT on Thursday morning, whatever that translates into where you are, the Earth's shadow will completely pass in front of the full Moon and remain there for 50 minutes. That is your total lunar eclipse!

Time for one more question: why does the Moon appear red during the eclipse? Remember I just wrote recently why the Moon appears red during moonrise/moonset? We learned that the Earth's atmosphere appears redder during sunrise/sunset as a lot of the blue light gets scattered away. Well, when the Moon is undergoing the lunar eclipse, it can't see the Sun! The brightest light it can see is the little bit of sunlight that makes it through the edges of the Earth's atmosphere wherever it is sunrise/sunset on Earth. And what color is that light? Red. And that's why you'll see a red Moon during the lunar eclipse! Enjoy it!

on the fourths of the earth were is arizona