I've only recently become musically acquainted with the artist Slaid Cleaves, born in Maine and living in Texas. This weekend, I present to you a heartbreaking song, Lydia, about a kind, wise old woman who can't quite pull her life together after the death of her son.

Oh, Lydie, let him go. The boy is gone.
Her mother struggled as she tore him from her arms.
Oh, Lydia, your tears are heaven's rain.
But she never was the same.

He hasn't hit it big yet, but his music is good enough that I think he ought to. Listen for yourself:

But there's something else -- that's also wonderful -- that is hitting it big, which you've probably never heard of. It's a comic book called the 99 that's quickly becoming a huge success in the Muslim world. 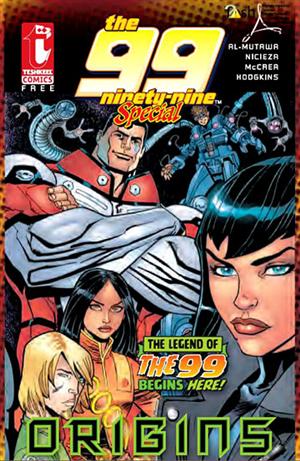 The comic is based on a legend of the 99 names of God, which is a list of 99 virtues of Allah in Islamic culture. These are, as far as I can tell, universally accepted good human behaviors, such as being graceful, merciful, protective, just, and nourishing. The BBC has a great article on the creator of this comic, who says the following about creating the comics for his children in the aftermath of 9/11:

I had already made a decision that I needed to find a way to take back Islam from its hostage takers, but I did not known how. The answer was staring me in the face. It was a[s] simple, and as difficult, as the multiplication of 9 by 11: 99.

So, at the age of 32, I uncapped my pen to create a concept that could be popular in the East and the West. I would go back to the very sources from which others took violent and hateful messages and offer messages of tolerance and peace in their place. I would give my heroes a Trojan horse in the form of THE 99. Islam was my Helen. I wanted her back.

What has been created looks amazing, and is partly based in actual history. In 1258, the Mongols invaded and destroyed much of Baghdad, leaving its great library in ruins, and littering the Tigris River with its books.

But in this comic, the librarians placed 99 special stones in the river to absorb some of the wisdom. Now, in modern times, the 99 stones have made it into the hands of 99 normal teenagers and young adults from around the globe, giving them each one of the 99 virtues and/or powers of Allah. 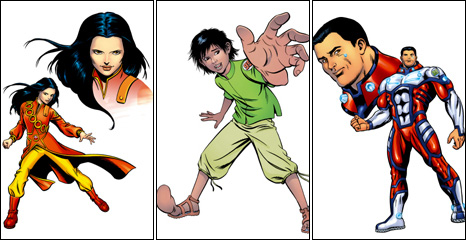 The comics now sell about 1,000,000 copies per month worldwide, in many different languages. A movie is being created based on it, theme parks have opened in Kuwait based on it, but best of all, you can download an issue in English for free if you're curious to check it out! I think it's a wonderful way to spend some time this July 4th weekend, and I hope you enjoy it, too!

"Dogs are our link to paradise. They don't know evil or jealousy or discontent. To sit with a dog on a hillside on a glorious afternoon is to be back in Eden, where doing nothing was not boring -- it was peace." -Milan Kundera It's the holiday season, and for most of us, that means spending time…

It looks like Australia has a similar situation to Germany and many of our other allies when it comes to laws against criticizing religions, at least in one province. Victoria has something called the Racial and Religious Tolerance Act that prohibits "inciting hatred against a person or class of…

This week's selection from Islam Online is pretty strange, and involves transexuality and its relationship to Islamic law. Enjoy below the fold.... Question: I have a very strange question. I'am 5 months ago turned to Islam alhamdulillah, I was a non-believer. Now I have a question about my past.…

Ok, I’ll confess--school has been blowing my f*$#!^& mind this past week--but in a good way, really. I’m studying a variety of interesting subjects which are all tying together in surprising ways... which has lead me to do quite a bit of extra reading and writing. Not that I mind. I just wish I…

Not a bad little comic. It's not exactly groundbreaking; the macguffins are about the same as The Mandarin's Seven Rings of Power in the Dr. Strange comics, for example.

But it is an entertaining read. Thanks!