The Math of the Expanding Universe

Okay. Yesterday, I explained to you that the only thing that determines how the Universe expands is the amount of energy density in it. But many of you wanted more details. So, by popular demand -- including one insistence that there is no equation that tells us how the Universe expands -- here is the simplest explanation with math that I can come up with for the expanding Universe. If you hate or don't care about math, do not read this. This article is not for you. But if you're curious, read on.

First, let me tell you the underlying assumption behind all of it. You assume that the Universe is -- on average -- identical in all directions (what we call isotropic) and the same everywhere in space (homogeneous). This means that it doesn't matter where you are or what direction you look in; the Universe is the same. On small scales, like the size of stars or galaxies, this isn't true. But on the largest scales, like scales larger than galaxy clusters, our observations support this. Take a look at the observations: 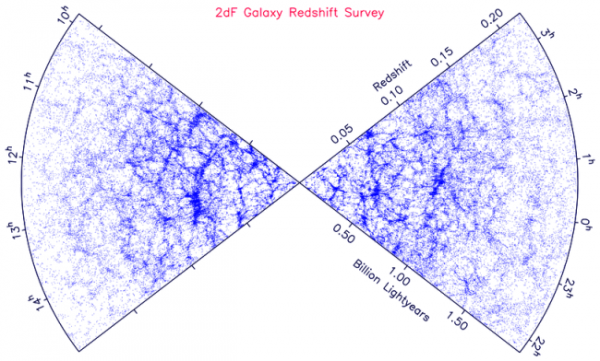 as well as at the theory: 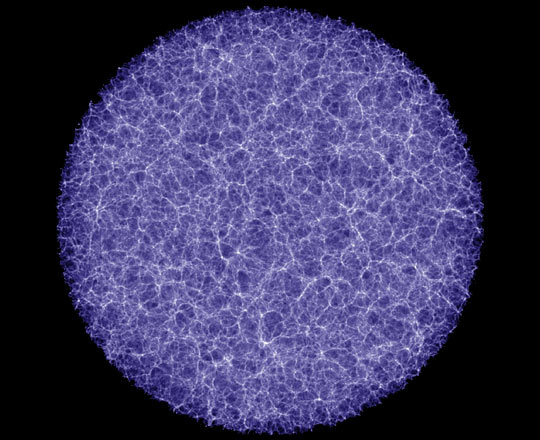 These match up pretty well! So, with this assumption that the Universe is isotropic and homogeneous, there are two ways to proceed. You can -- as one option -- choose General Relativity as your theory of gravity, write down the spacetime that describes an isotropic, homogeneous Universe (the Robertson-Walker metric), and solve for the equations that govern the evolution of the size and scale of the Universe as a function of time, known as the Friedmann Equations. The end result that you get out of that is this relationship between the Hubble expansion rate, H, and the energy density of the Universe, ρ:

That thing that the Hubble expansion rate equals, å/a, is just the velocity that an arbitrary point in the Universe moves away from us (å) divided by the distance to that point (a).

Now, the curvature of our Universe, k, turns out to be zero, and the cosmological constant, Λ, is just another type of energy density. So if we like, we can rewrite this equation in a more simple form:

That's the rigorous way to do it, and it's an exercise that every graduate student in cosmology is required to do. But there's an easier way to do it. A much easier way, that I'm going to walk you through. Remember taking physics in high school, and learning about two types of energy: kinetic energy and potential energy? In our example here, we're considering an arbitrary point in a homogeneous, isotropic space. It has both of these types of energy: it's moving, after all, so it has kinetic energy, and gravity is trying to pull everything back together, so it has gravitational potential energy. Kinetic energy is positive:

While gravitational potential energy is negative:

Now, in a flat Universe like ours -- one with zero spatial curvature -- we have this very interesting property that the total energy of this Universe is also zero. This means that if we add up kinetic energy and gravitational potential energy, we get zero, like this:

Or, I could do a little algebra to cancel out the little m, and make everything positive, in which case I get:

That looks okay, but it isn't quite what I want. I don't really know what this big mass, M, is, do I? Well, I know that mass is equal to density times volume. And -- if I remember Gauss' law for gravity -- I will recall that the volume I'm interested in is the volume of a sphere. So I need to replace that mass, M, in my equation with this:

where the volume, V, is:

and so my equation that I got from kinetic and potential energy becomes this:

Now, this looks pretty good! I'm going to cancel one of the rs from the numerator and denominator, and I'm going to multiply both sides of the equation by 2. So our equation looks like this now:

Hmm. Looks like we're getting really close! Let's divide both sides by r2, and see what we get:

Nice! The only thing is, instead of having H2, we've got v2/r2. But hang on. Remember what I said about what the Hubble expansion rate is?

That thing that the Hubble expansion rate equals, å/a, is just the velocity that an arbitrary point in the Universe moves away from us (å) divided by the distance to that point (a).

Well, that's what we have, a velocity divided by a distance! So all we have to do is subsitute in H for v / r, and look at what we've got:

the equation that governs the expansion of the Universe. And all I need was a little bit of high school physics, geometry, and algebra. And now you know how to do it, too!

Thanks for the article with a little bit of math in it. I love math, seeing how equations evolve fills me with joy for some reason. Needless to say I thoroughly enjoyed this post and I would ask that you do more like it in the future.

However I have just one request/criticism. Please never use an oversized animated gif picture of an object growing larger composed of colors that are not easy on the eyes. That picture was incredibly distracting while trying to read the first paragraph. I believe that there is some clever HTML code that allows you the user to toggle whether or not an animated gif actually animates, although I could be completely mistaken on that.

Eric,
Hitting escape should do the trick.

Thanks for the tip. Unfortunately that functionality has been left out of Chrome(purposefully or accidentally, I do not know). I know, I know it is my own fault for using a browser that oddly does not have the above functionality built into it, but in other areas I really like this browser.

I'm not sure if I had seen this in other place, but surely it's wonderful.

There was an episode of The Twilight Zone, in which one person learnt the meaning of life, and whispered to other people. When they heard this simple phrase, they went crazy. The story ended with everyone in the world knowing the meaning of life, but being too insane to do anything about it. This equation reminds me of this. I'll go around muttering "8 thirds of pi gee rho" all day now, just to see what looks I get.

In the first derivation of H2 Ï is the energy density of the Universe.
In the second it is the average mass per volume, M/V.

Are these two the same?

I have another question.
If the Universe is expanding everywhere then there is continuous expansion even of the space occupied by a single planet, such as the Earth. But that expansion is defeated because the matter in the Earth is gravitationally bound and keeps sliding "down hill' (so to speak) to keep a constant radius.
But this converts the increased potential energy from the expansion into kinetic energy.
Any idea what the rate of kinetic energy production is from this process?
Or am I completely off base here?

Hmm, this math is rather straightforward, understandable even for those 20 years past graduation, but where comes the "total energy is zero" from? If that holds true, what powered the big bang? Seems counter intuitive that the universe can come into existence purely as a spontaneous separation of no energy in a lot of kinetic energy and an equally large gravity potential. Or does that "zero energy" only cover "classic" particles, and you can still have dark energy driving the process?

This is an excellent article. Very appropriate as I begin teaching both high school physics and high school astronomy on Wednesday!

excellent read, may i also recommend kinetic energy for your resources to help improve this article

This is really a very good brief explanation of "Unverse Expansion ". But I am also in need to know "The latest equations by American Scientists (2011/2012). I 'd like to know the difference. Thanks.

This was an interesting way of looking at it I have to say. I just got interested in this kind of stuff only a little while ago but I would like to know more, this was a definite help. I have only one question if the thing we know as potential and kinetic energy have to equal 0 doesn't that prove at one point the universe has to stop expanding because the amount of potential force has reached 0 making the kinetic force equal 0? And then after this happens what would this mean for our universe? Will it just stop expanding? Or will it then try to regain the potential energy lost?

Hello,
I think few problem with this explanation.
1. Hubble can make speed exceeds speed of light and so classical representation of kinetic energy is not valid, if we talk about total energy:
E=mc^2-GmM/R (as an approximation)
to take into account matter energy which is required for flat space.
General relativity does not have the concept of rest mass....
So, your derivation does not take into account the rest mass, and assumes that everything moves by the same speed (clearly if we assume constant density, then the speed will be function of the radius away from us)...