Why the Moon Turns Red During an Eclipse!

"With hue like that when some great painter dips

His pencil in the gloom of earthquake and eclipse." -Percy Bysshe Shelley

There may be no greater sight for the naked-eye astronomer than a total lunar eclipse. Normally, we get one or two of these a year, and the same wonderful thing happens at each one.

But then the Earth begins to completely block the sunlight from landing on the Moon, and you start to see the Earth's shadow land on the Moon. And as more and more of the Moon falls into the Earth's umbral shadow, less and less of it is visible to us.

But just when you think the Moon is about to disappear completely into darkness... 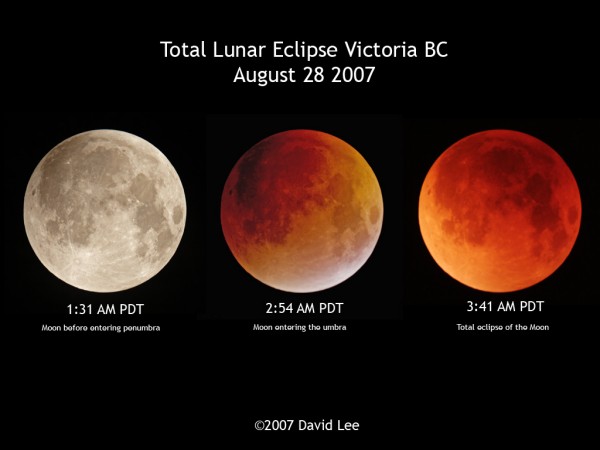 Only the white of the Moon disappears, and gets replaced by a dim, red color. While this red Moon that gets left behind is something like 10,000 times dimmer than the full Moon it left behind, it's still easily the brightest thing in the night sky.

Well, why does the Moon turn red?

But the Earth has something "extra" that makes the Moon light up during an eclipse. 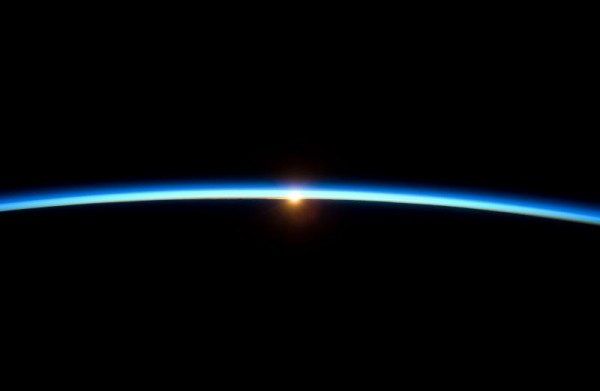 The atmosphere! As photographed by the Space Shuttle Atlantis from the International Space Station, the Earth's atmosphere glows a pale blue color when the Sun shines directly on it.

But the Moon doesn't turn blue, it turns red. So what's the deal? 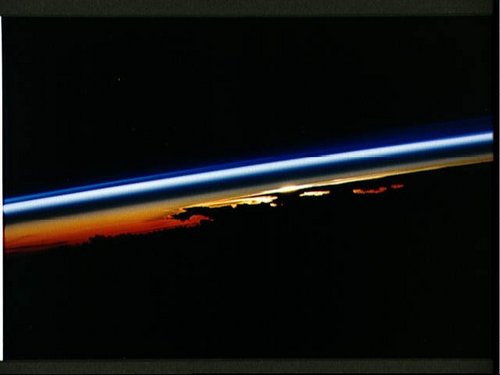 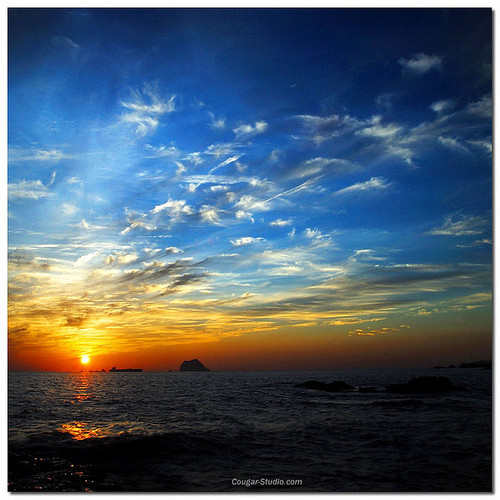 The Earth's atmosphere scatters blue light more easily than it scatters red light. During most times of day, when light is plentiful, it means that more blue light goes in all directions, and that's why the sky looks blue. But at sunrise or sunset, the sunlight needs to pass through much more atmosphere than normal, the blue light gets scattered away, leaving more red light than blue, and turning the sky redder than normal.

So along its journey to the opposite side of the Earth, the sunlight winds up traveling through hundreds upon hundreds of miles of atmosphere during a lunar eclipse, and only the reddest light will make it all the way through! The result?

The Moon does turn red during an eclipse! In fact, the closer you are to the center of the Earth's shadow, the redder the Moon will appear!

The Moon appears whiter as more blue light adds to the red, and more red as less and less blue light gets through. Ever wonder what it would look like if you caught the Moon right at the center of the Earth's shadow? 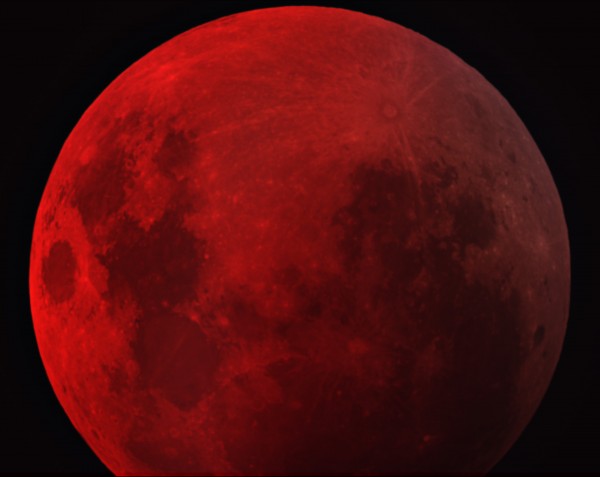 Image credit: Martin Pugh, and click for a huge version!

It would be deeply, darkly, and nearly uniformly red! You might, in fact, wonder what this looks like if you were on the Moon. Well, NASA has put together an animation showcasing one of the most spectacular phenomena that you'd see...

The "Ring of Fire", or the sum of all the sunsets and sunrises, simultaneously, from all around the Earth! The result is a great red ring, that would appear bluer/whiter nearest wherever the Sun is closest to the edge. (Not shown in the animation above.) And now you know why the Moon turns red during an eclipse!

If you have a chance this year (which you will unless you live in the Americas like me), check out one of the two lunar eclipses happening, because you won't have another chance until 2014!

So it's no wonder that people 2000 years ago thought this was some kind of ominous sign. Yet another reason to treat ancient texts for what they are: arguments from ignorance.

Makes me think of what it must have been like to be the 1st person in an ancient civilization to predict when the eclipes were going to happen. You'd go from the best turd collecter in the village to demi-god overnight.

So it's no wonder that people 2000 years ago thought this was some kind of ominous sign. Yet another reason to treat ancient texts for what they are: arguments from ignorance.

Why you left out the apocalypse part?

This has to be your most incomplete explanation yet. The two most common questions I get asked about Lunar eclipses is color (great explanation) and how that red light gets into the umbra. After all it's light traveling in a straight line that creates the umbra, then you show an illustration of light being bent into the umbra with no explanation of what causes the bending. Why could you not have simply mentioned REFRACTION, in just one additional sentence?

A digression but striking nonetheless is how thin our atmosphere appears from space. I get a little nervous when I reflect upon that.

Boggins' comment got me thing, and it seems that there are several interpretations of "once in a blue moon", but the most widely accepted is the name given to the second full moon in a month.

About once every 13 months.

"then you show an illustration of light being bent into the umbra with no explanation of what causes the bending."

Probably figured that kids had already seen a prism splitting light and a rainbow doing the same thing and figured that maybe the adults had remembered it.

I never know that moon can turns red during eclipse...well, iy just a reflection of the red light..right? :)

This is mentioned in the bible so.i wanted to find out if it has happened yet. Wow God our creator is amazing

Sorry, your imaginary friend had nothing to do with it, marie.

Considering that the Bible mentions the "moon turns to blood" as one of the signs of the apocalpyse, this certainly is NOT what it had in mind. The moon has "turned to blood" literally thousands of times since the Bible was written. Which one was a sign of the apocalypse?

Yes, Marie, God truly is amazing, more awesome than I, or anyone for that matter, can ever say in words.

Sean T, I believe you are correct about this not being the moon turning to blood, but perhaps it is a sign-similar to a rainbow-, a promise from God Himself; however, this is just a speculative thought, and I have no proof that the redness is a sign for that.

Also, thank you for the explanation, how interesting.

Oops, sorry for the double thing...

I really wish I would have seen the eclipse this year but I was too busy. :(