The Whole Universe from One Satellite's Eyes

"We were left with a picture of part of the sky with no stars or galaxies, but it still had this infrared glow with giant blobs that we think could be the glow from the very first stars." -John Mather

When you look out at the night sky, you're limited by the light pollution from your surroundings, the imperfections of our atmosphere, the light-blocking gas and dust throughout the interstellar and intergalactic medium, and the capabilities of your eyes. Still, what one can see is truly a sight to behold. 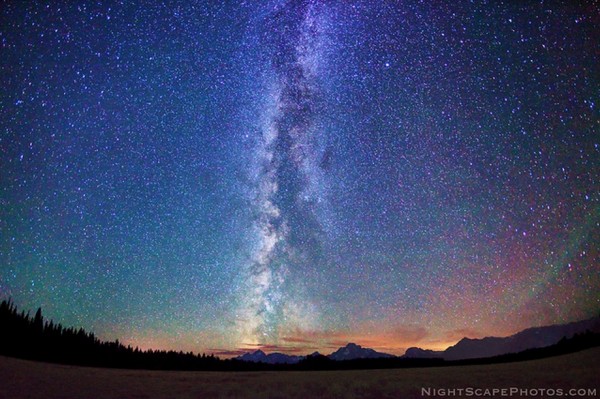 What if you didn't have those limitations, though?

You could get rid of the light pollution entirely by heading into outer space, where there's no competing light sources to the night sky. You could soar above the atmosphere, where the paths to the stars becomes so pristine that they cease to twinkle. You could even look with infrared cameras instead of your eyes, seeing past the galaxy's light-blocking dust. And if you could do that, for years and years, photographing the entire visible Universe in the infrared from space, you'd be NASA's WISE mission. 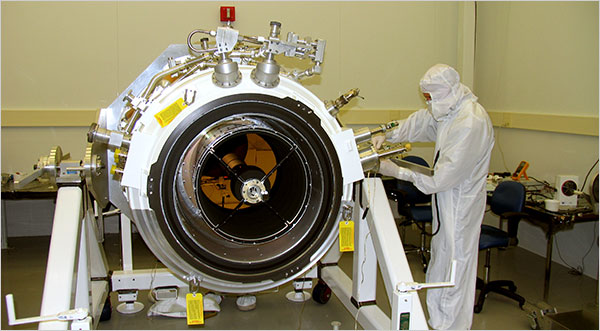 Well, here we are, 2.7 million images, four wavelengths of light and an unbelievable 15 trillion bytes of data later. There have been some great discoveries along the way, but what NASA's gone and put together has literally left me breathless.

Without further ado, here's WISE's view of the entire 360 sky. 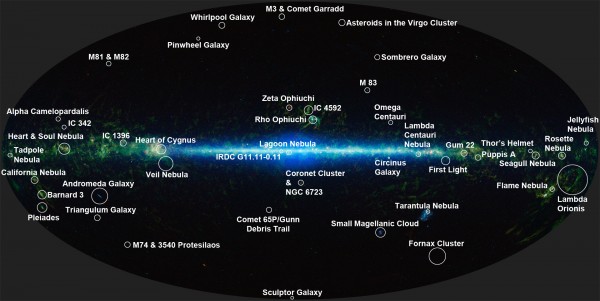 You can zoom in on the image yourself, download the 170 megapixel version, or just check out some of the highlights I've pulled out, shown side-by-side with their visible light counterparts. Notice, in every case, how different the infrared view (at left) is from what you can see with visible light (on the right). Let's start with Omega Centauri, the largest and most massive globular cluster in the galaxy.

In one of the most coincidental alignments in our part of the Universe, we've got a close, active star forming region just 420 light-years away, known as the Coronet Cluster, paired in the sky with a distant globular cluster, NGC 6723, around 29,000 light years distant! In visible light, the star forming region is all but obscured, but its inner workings are laid bare by the infrared power of WISE!

But perhaps we need to look outside of our own galaxy to help give a greater perspective; let's look at our small, nearby satellite galaxy, the Small Magellanic Cloud. In visible light, the pink belies the star formation it's undergoing. But with WISE's infrared eyes, you can see so much more than that. 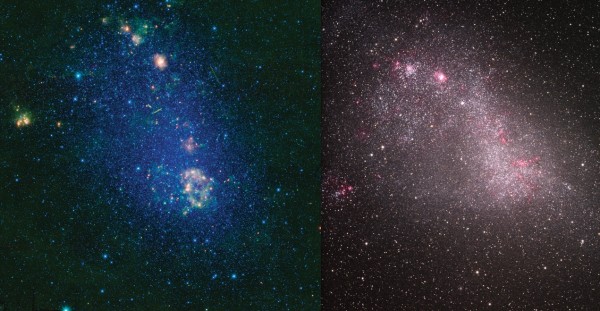 And, perhaps most strikingly, the Andromeda galaxy, the Milky Way's sister and nearest neighbor to us, whose dusty warm gas tracing out its spiral arms is revealed by WISE in a way that visible light -- and our eyes -- can simply not uncover.

But most spectacular to me, as you well know, is being able to scroll through the plane of the galaxy. We did it before in visible light here, now hang onto your hats and take a look at our home galaxy, in great detail, in the infrared!

That's the whole Universe, as you'd only be able to see it from outer space, with infrared eyes far superior to those of any living creature! And if you made it all the way down here, perhaps you want one more chance to download the entire infrared sky, courtesy of WISE; enjoy!

It would help if the images had legends so that, for example, we would know which was the infrared image and which was the visible light image, and so could relate the images to what is described in the text. :-(

Divalent @2, the IR images (from WISE) are on the left in every case, with visible light images shown on the right. I have edited the text of the article to make that more clear; sorry if there was any confusion.

"take a look at our home galaxy...[pic]...That's the whole Universe"

No wonder you're always confused when you can't read more than a dozen or so words.

"That's the whole Universe, as you'd only be able to see it from outer space,"

Quite why your reading comprehension fell down after "Universe" has, I must admit, confused me, but this is the major cause of your "huh?" confusion you expressed.

Just hold out for a little longer next time and maybe you won't be so confused.

Awesome article but I was way more intrigued when I glanced to the left and saw a hot bearded man dressed as wolverine who lives only 2 hours from me in Oregon AND is an astrophysicist.

Wow, this is a spectacular picture man. Wish I had a really long vertical screen to make it my wallpaper lol.

Life itself is only a vision â a dreamâ¦

I always feel amazed but a bit sad when i see amazing space pictures. I'll never get my own personal spaceship and fly around the Pillars of Creation. just stand on the moon and look at the earth.