"How is it they live for eons in such harmony - the billions of stars - when most men can barely go a minute without declaring war in their mind against someone they know?" -Thomas Aquinas

Welcome back to another Messier Monday here on Starts With a Bang! Each Monday, we take an in-depth look at one of the 110 deep-sky wonders -- all visible with a small telescope or even good binoculars -- that make up Charles Messier's original catalogue of non-cometary objects! Today, we're taking a look at a one-of-a-kind galaxy among the Messier objects, which just happens to be the (co-)first galaxy I ever found-and-saw for myself! 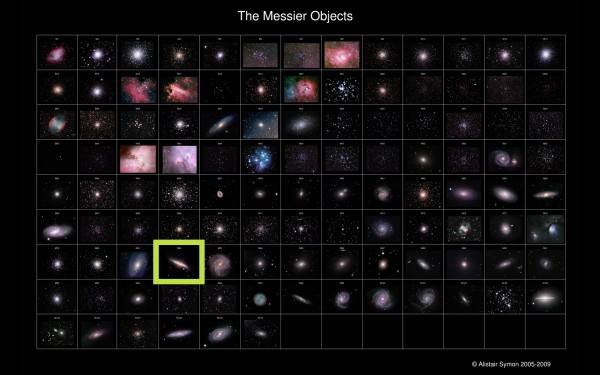 The object for this week is The Cigar Galaxy, Messier 82. And the reason it's the first object I've ever found is because its location is so easy that even if the only thing you can find in the night sky is the Big Dipper, this galaxy will be unmistakeable when you see it through your telescope/binoculars. To get started, simply locate the "cup" of the Big Dipper. 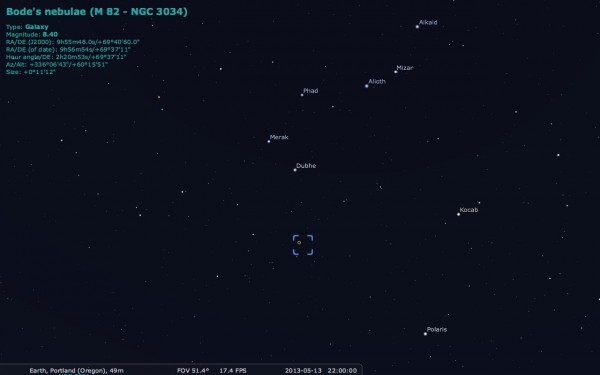 In particular, you'll want to find stars that mark the "tip" of the cup, Dubhe, and the opposite "base" of the cup, Phad. Draw an imaginary line from Phad-to-Dubhe, and then extend that line the same distance again, so that you wind up near the faint naked-eye star d Ursae Majoris. If you then point your binoculars or low-power telescope at that location, a pair of galaxies -- the first external galaxies I ever found in the night sky for myself -- will be yours to behold. 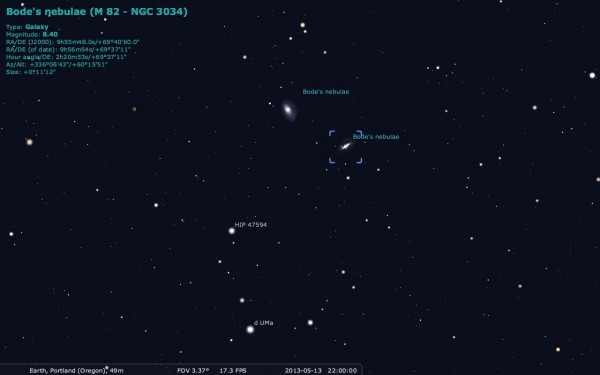 They'll very likely look like very faint clouds, but unlike actual clouds they'll never move relative to the rest of the sky or change shape. That's because these two objects are galaxies, the previously-looked-at Messier 81 and the smaller, cigar-shaped Messier 82! It was discovered in 1774 by Johann Elert Bode, one of Messier's contemporaries, and looks rather unspectacular next to the great spiral that is Messier 81. 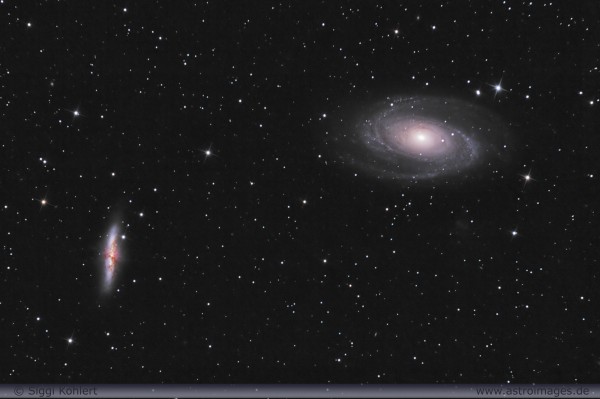 But despite being one of the smallest galaxies in the Messier catalogue, M82 holds a unique distinction: it's the only starburst galaxy out of the 40 Messier galaxies! We have plenty of star-forming regions in our own galaxy, where neutral (mostly hydrogen) gas is collapsing to form new stars, and a great deal of hydrogen gas becomes ionized, giving off a characteristic pink glow thanks to the electrons.

Well, in rare cases in astronomy, the majority of the entire galaxy becomes a star-forming region, and that's what we call a starburst galaxy! 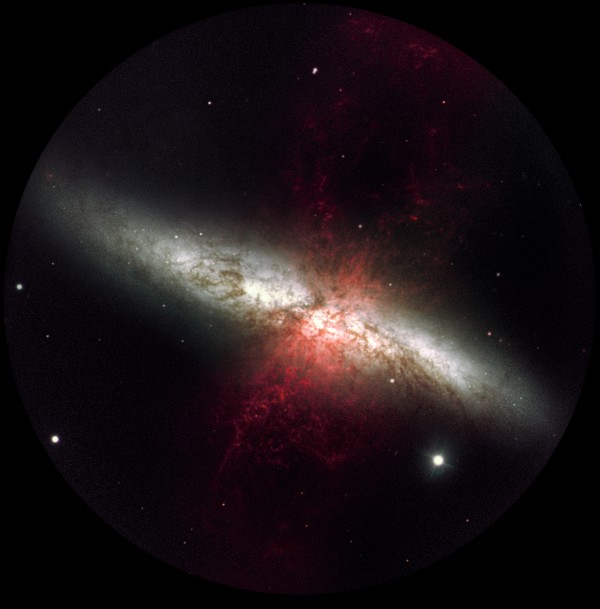 So, meet Messier 82, at just 12 million light-years distant, the closest starburst galaxy in the Universe! Of course, this galaxy wasn't always forming stars at this insanely fast rate; something had to happen to trigger it. And -- in this Universe at least -- there's only one thing we know of that triggers star formation rates this high: either a gravitational interaction or a collision with another massive object.

In the case of the Cigar Galaxy, the culprit is easy to see.

It's Messier 81! These two galaxies were once simple, undisturbed spiral galaxies, much like Andromeda and the Triangulum Galaxy are in our own backyard. But the gravitational interactions between these two neighbors -- as they enter the process of merging with one another -- causes tidal tails and extended arms in the larger, more massive M81, and has triggered a starburst in the smaller, more disrupted M82. The star formation rate in the Cigar Galaxy is presently about 10 times higher over the past 100 million years than it should otherwise have been. 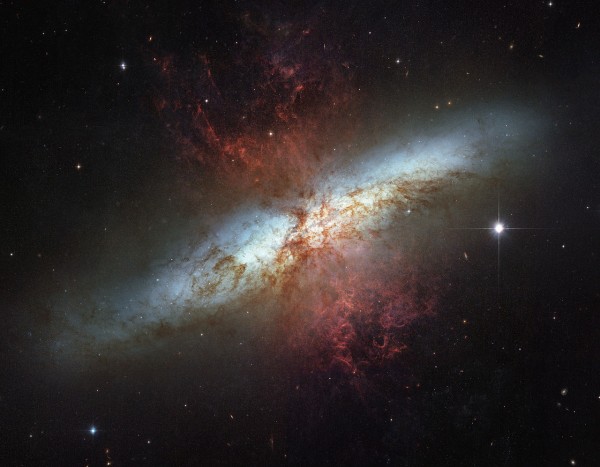 Thanks to the Hubble Space Telescope, we've learned that there are actually 197 distinct star-forming regions in-and-around the center of Messier 82, with each one containing the mass of about 200,000 Suns! This incredible star-formation rate, as the merger process continues, will eventually increase even further over time! If you want proof that the entire galaxy has heated up, all you have to do is take a peek in the infrared. 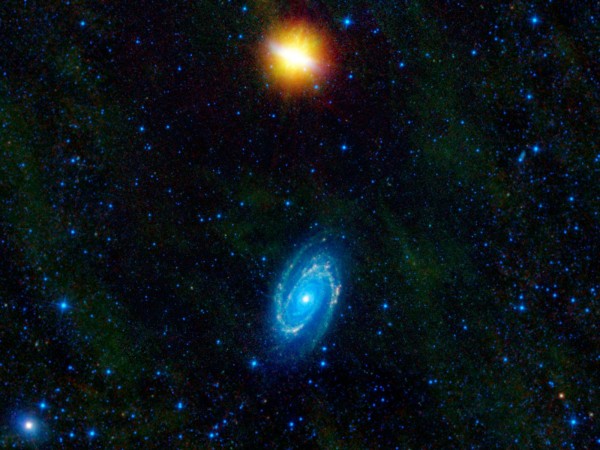 As you can see, Messier 81 and 82 look very different than they do in the visible! The blue light represents stars, while the green and red shows off warm dust. As the WISE image above definitively shows, the Cigar Galaxy is filled with warm gas-and-dust!

With all these new stars being formed, you might expect that M82 is a hotbed of supernovae. Although the light-blocking dust is very heavy in the visible part of the spectrum, we can (and do) look in the radio to see what's going on as far as supernovae are concerned. 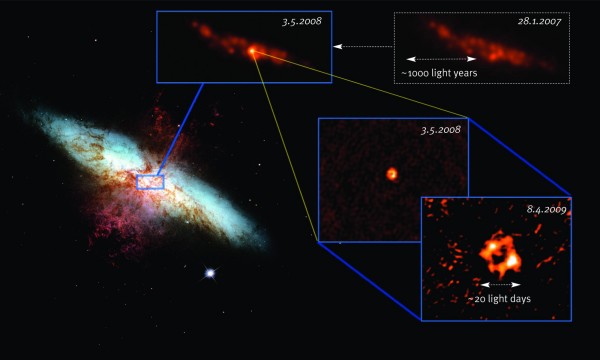 In fact, the Cigar Galaxy has (probably) had three of them in just the last decade! Its spiral arms were only discovered in the last decade as well, as the near edge-on orientation (it's tilted at 80° relative to us) made it incredibly difficult to decipher. Because of the starburst going on, it's still classified as an irregular galaxy, and it's only going to get worse from here, as the merger process -- probably originally begun about 600 million years ago -- continues.

Compare what the infrared (via Spitzer) reveals, when compared to a "visible-only" image. 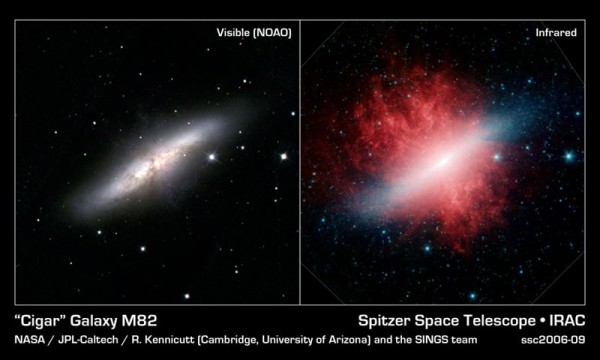 We can also learn some amazing stuff about this galaxy using the highest-energy light it emits: X-rays! Point X-ray sources -- evidence of black holes and neutron stars -- litter the inner region of the galaxy, with the strongest source coming from the center, where there's a black hole estimated to weigh in at 30 million Suns, some 10 times as massive as the Milky Way's central black hole! 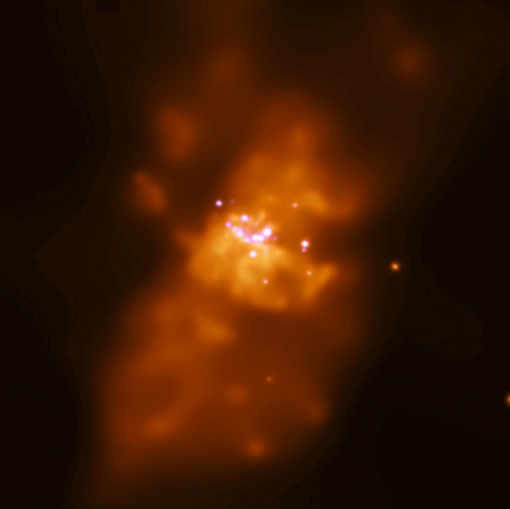 So what else is there to showcase? How about a grand composite image of Hubble, Spitzer and Chandra, all together? 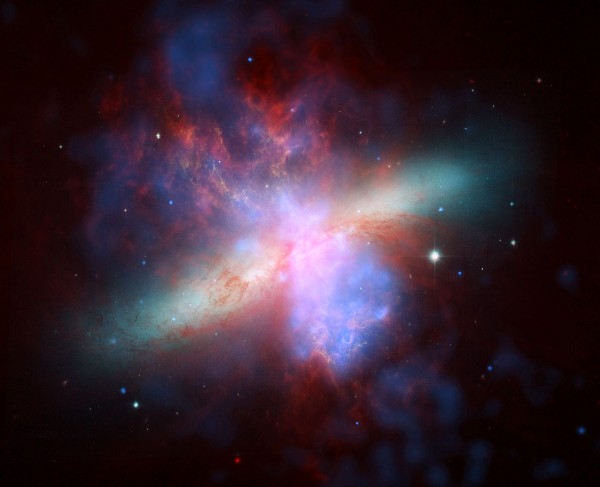 While it may be a small, faint fuzzy cloud through your telescope, make no mistake: a fantastic part of cosmic history -- the assembly, buildup and mergers of galaxies -- is present right in our own backyard, and you get a glimpse of it every time you look just outside the Big Dipper at the Cigar Galaxy: M82!

Come back next week, where we’ll take a look at yet another one of the 110 deep-sky objects that make up the Messier catalogue; don't miss it!

" 197 distinct star-forming regions in-and-around the center of Messier 82, with each one containing the mass of about 200,000 Suns! This incredible star-formation rate, "

Exactly what is the star-formation rate in these regions, or in M82 as a whole. It would be interesting to know if it's on the order of a star a day or a thousand stars a day, or even more.

I am prepared to have my imagination staggered.

Ethan, this is one of the best Messier Monday items - your enthusiasm is contagious!

Oddly enough, you use the same method as I do for finding M81/82. Whereas the only "official" versions I've seen in starhopping guides go from the edge of the region of UrsaMaj, which has never worked for me, probably because you're meant to use some stars which aren't all that visible in urban settings (forming the ear of the Great Bear).

You may have noticed that I actually have a philosophy when it comes to finding Messier objects: use the brightest / most recognizable stars and asterisms possible to describe locations. Even many dedicated skywatchers can no longer routinely see all the magnitude 4-and-5 stars in the sky depending on their location, so why rely on a comprehensive knowledge of them when there are other, brighter guides?

"the closest starburst galaxy in the Universe"?

IC 10, a dwarf irregular galaxy and a satellite galaxy of the Andromeda Galaxy, is a starburst galaxy too, at 2 million light years away is 6 times closer than M82, meaning it is the closest galaxy known undergoing a starburst activity.

A new paper is out in Nature (http://www.nature.com/nature/journal/vaop/ncurrent/full/nature13710.html) , claiming a a 4-sigma precision mass measurement (428 +- 105 M_sun) on M82 X-1, and identifying it as a clear intermediate mass black hole.

That is quite reliant on an uncertain extrapolation, but the paper and their conclusion is still very interesting, and possibly (maybe even probably?) right. IMBH's should definitely exist, but it's very cool to be honing in on one!

@Ethan #8: Thanks! I chose the word "claim" on purpose :-) Being a non-astro physicist, I appreciate your take on the analysis.