Reverse Terraforming (for Supervillains only)

"The Earth destroys its fools, but the intelligent destroy the Earth."
-Khalid ibn al-Walid

Usually, when we talk about terraforming, we think about taking a presently uninhabitable planet and making it suitable for terrestrial life. This means taking a world without an oxygen-rich atmosphere, with watery oceans, and without the means to sustain them, and to transform it into an Earth-like world.

The obvious choice, when it comes to our Solar System, is Mars.

The red planet, after all, is not a total stranger to these conditions. On the contrary, for the first billion-and-a-half years of our Solar System, give or take, Mars was perhaps not so dissimilar to Earth. With evidence that there was once liquid water on the surface, a thicker atmosphere, and possibly even life, there's no doubt that the right type of geo-engineering could bring those conditions back.

But there's also no doubt that we couldn't, if we were sufficiently motivated, turn the Earth from this... 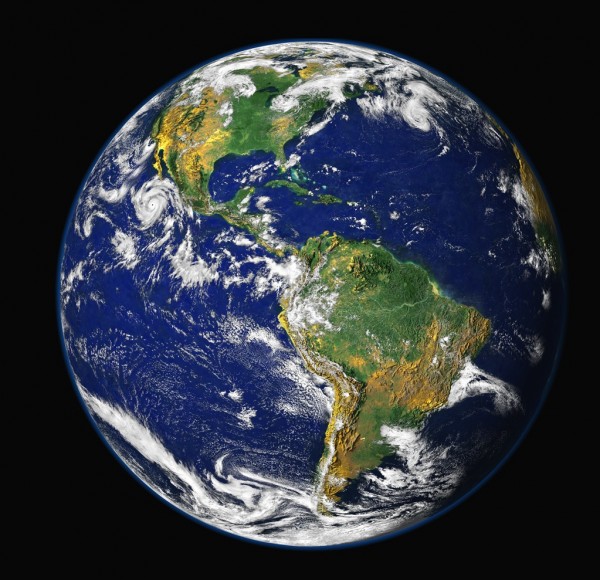 into a world where the atmosphere and the oceans were stripped away. Into a dry, nearly airless world, much like Mars.

Inspired by a recent Astronomy Picture of the Day, above, it's now time to tell you how I would, scientifically, remove the oceans from the planet. It's a process I like to call reverse terraforming, whereby you turn a world the Earth into a world like Mars.

At present, this is difficult for a number of reasons, but here's the biggest one.

The Earth's magnetosphere! The same reason that your compass needle points towards the magnetic poles of Earth is the only thing keeping our oceans here on our world! The Sun is constantly shooting out a stream of high-energy ions, known as the solar wind, at speeds of about 1,000,000 miles-per-hour (1,600,000 km/hr). 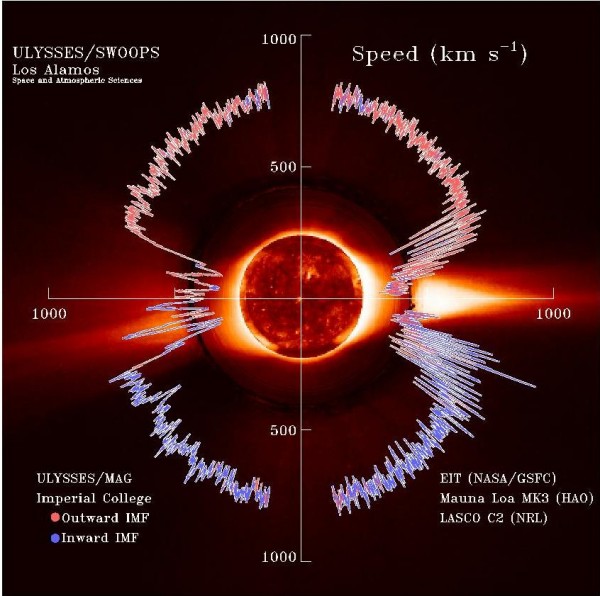 As the solar wind runs into a world, these ions collide with particles in a planet's atmosphere, giving those molecules enough kinetic energy to escape from the planet's gravitational field.

Of course, we have a powerful magnetic shield from the solar wind thanks to our hot, dense and (partially) molten core. Our planet's magnetic field successfully bends away practically all of the solar wind particles that would be in danger of colliding with us, with the occasional exception of the polar regions, where the ions -- and hence sometimes aurorae -- get through.

Right now, our atmosphere is pretty thick: it consists of some 5,300,000,000,000,000 tonnes of material, creating the atmospheric pressure that we feel down here at the surface. There's so much pressure, in fact, that our Earth can sustain liquid water on the surface. 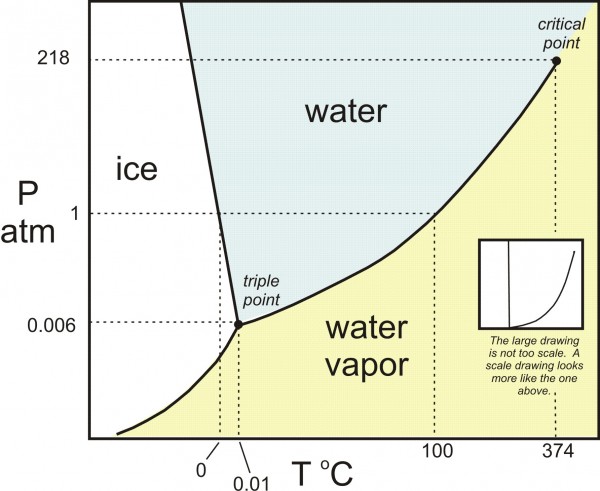 The ability to have liquid water is relatively rare: we need the proper temperatures and the proper pressures! That means we need at least at atmosphere of a certain thickness, a characteristic that Mars, Mercury, and the Moon totally lack. But we've got it, and hence we can have liquid water on our surface.

And do we ever! There's much more water than there is atmosphere. About 250 times as much, by mass, is the amount that the oceans outweigh the atmosphere, meaning that the oceans comprise about 0.023% of the Earth's total mass!

But we could get rid of all that liquid water, eventually, by letting the solar wind in. 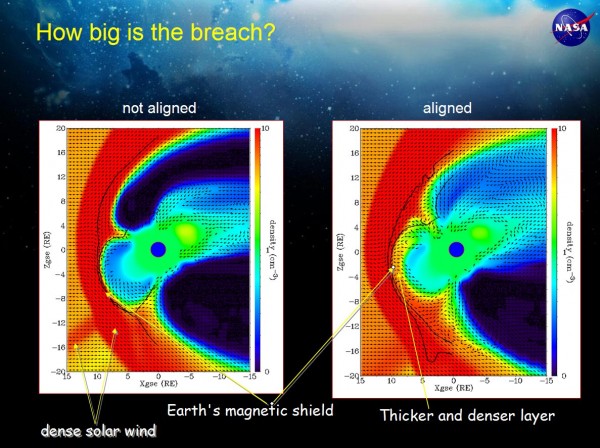 In other words, if we could create a large enough magnetic field on Earth, we could poke a hole in the magnetosphere and allow the solar wind to strip our atmosphere away! 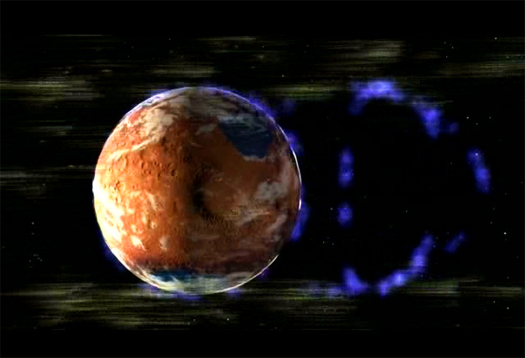 Something similar happened to Mars about 3 billion years ago, when its core stopped producing that powerful magnetosphere shield, and its atmosphere got stripped away. When the pressure at the surface dropped below a certain level, the liquid oceans there could only exist as frozen ice or boiled off as water vapor. (And once they're water vapor, they become part of the atmosphere, where it, too, can be stripped away by the solar wind!)

It may not be fast enough for the most supervillainous among you, but one thing's for sure. 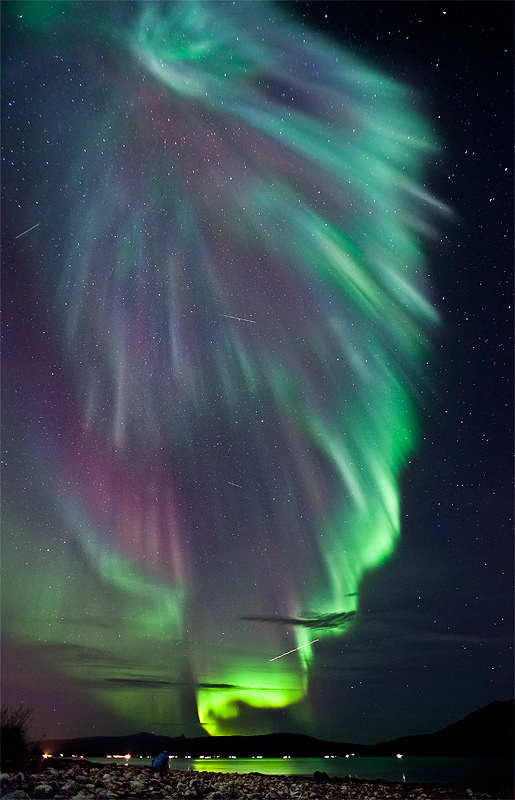 If we do poke a hole in the magnetosphere and allow the solar wind in, I'll definitely be enjoying the auroral show!

Observations tell us that currently, the Earth, Venus, and Mars are all losing ~10^25 oxygen ions per second. Over the life of the solar system, that would be a layer of water about 30 cm deep on Mars and not quite 10 cm at Venus and Earth. The effect of the Earth's magnetosphere is to concentrate those losses at the magnetic cusps, rather than having them spread out over the entire dayside of the planet as at Venus and Mars. The smaller exposed area at Earth is offset by the availability of ion acceleration mechanisms that require a magnetic field.

Mars is probably losing more neutral oxygen, but that is because of its weaker gravity. Neutral atoms are not affected by magnetic fields.

Whether a higher level of solar activity in the past (young stars tend to be more active than middle-age stars like the Sun) would have made a difference in the effectiveness of a magnetosphere is the question here. It is clear that the magnetosphere does not make a large difference in the oxygen escape rate under current conditions.

Mars has very much fewer O+ to lose.

That rate is effectively much, much faster than us.

And though neutral O2 is unaffected by magnetic winds, they are still affected by their energy content which can be increased by collision with a fast particle in the solar wind.

A solar wind that a magnetic field would keep at a distance.

"It's complicated" is about all I could say with confidence on the matter.

But the overview indicates the paper is somewhat shallow in its rigour.

I did not know Earth's magnetic field protected its atmosphere and hence oceans. Nice.

Since mars no longer has a magnetic filed to protect its atmospher, how would terraforming on Mars work? Here is the wiki answer/article titled Terraforming Mars http://en.wikipedia.org/wiki/Terraforming_of_Mars

::scene: top of a hill outside a small mountain town. A young boy dressed in an aluminum foil supervillain costume holds a large horseshoe magnet. He looks rather upset::

Wouldn't it be possible to wind a giant coil around the equator, and attach the wires to a kick ass dynamo driven by a thousand nuclear reactors, to counter the earths magnetic field? We might get to see some sparks flying ... Anyway, the super villain in me is more interested, in how big the drop of oil is, that is still left on our planet instead of that mushy mushy water.

So, even before our Sun dies, the Earth is going to loose its atmosphere and the life on Earth will be gone? If so, interesting.

General Disarray: "Professor Chaos, I heard that they have bigger magnets over at the LHC..."

"There's much more water than their is atmosphere."
Sorry, had to go all grammar police here... great article nonetheless.

Thank you, fixed, and how embarrassing!!!

One qustion what technology could be used and it would have to be a 2 or 3 class civilization correct?

Venus hardly has any magnetic field, is closer to the sun, and has a super dense atmosphere. Why hasn't it's atmosphere been blown away by the solar wind?

Another embarrassing error, but not your fault: inset in the triple-point graph "not too scale"...

Haven't we been reverse terraforming the Earth for some time now by pumping the atmosphere full of CO2? And isn't it the evil scientists who have been trying to stop us?

They're only Evil Scientists if you're making pots of cash off the refining of fossil fuels, Graham.

re 11: Venus IS losing a lot of atmosphere to the solar wind.

But unlike Mars and even Earth, Venus is very much more volcanically active.

Matt@11: Venus is losing atmosphere to the solar wind at a rate of ~ 1 kg/s. The Earth is also losing atmosphere at about the same rate. That adds up to ~10^16 kg over the history of the solar system. But Venus and Earth have masses of several times 10^24 kg, and as Wow points out, there is active volcanism on both planets to replenish the atmosphere. At Venus there is also sputtering when an energetic particle crashes into the surface, though that is a smaller effect.

At Venus and Earth, an oxygen atom needs an energy of about 10 eV to be traveling at escape velocity. Molecules need even more. It's actually quite difficult to impart that much energy to a neutral atom. It's easier to strip off an electron, or have a neutral oxygen atom charge exchange with a solar wind proton (this reaction has a relatively large cross section), and then energize the ion via some plasma wave.

Note also that Venus and Mars have an ionopause: a boundary at which the bulk solar wind is deflected around the planet due to the pressure balance of the planet's ionosphere. The ionopause does nothing to stop the energetic particles (you need a magnetic field for that), and there are ways of transferring energy and momentum across that boundary (e.g., via Kelvin-Helmholtz vortices), but the bulk solar wind does not actually reach the surface of Mars or Venus. There are also ways of transferring energy and momentum across the Earth's magnetopause--many people in the space weather business are focused on exactly when and how that happens.