"My role in society, or any artist's or poet's role, is to try and express what we all feel. Not to tell people how to feel. Not as a preacher, not as a leader, but as a reflection of us all." -John Lennon

Welcome to the latest edition of Messier Monday, where each week we take an in-depth look at one of the 110 deep-sky objects in the Messier Catalog. These objects, all of which are visible from certain northern latitudes at certain times of the year, were catalogued explicitly to prevent comet-hunters from confusing these static objects with potential comets. 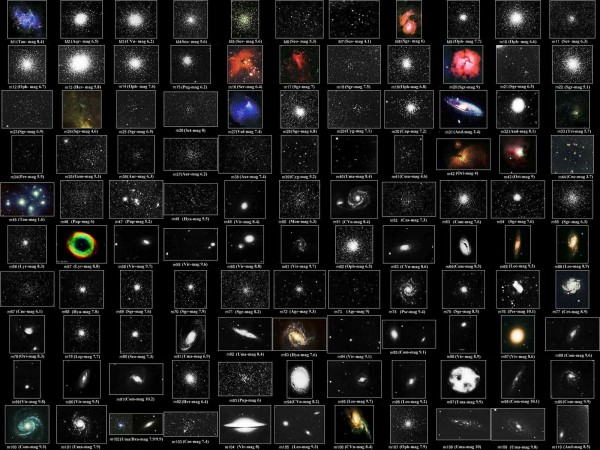 This week, as the constellation Orion stakes its prominent claim in the winter skies immediately following sunset, I want to point your attention near the famous Orion's Belt, and direct you to a lesser-known (but no less spectacular) object for you to enjoy. 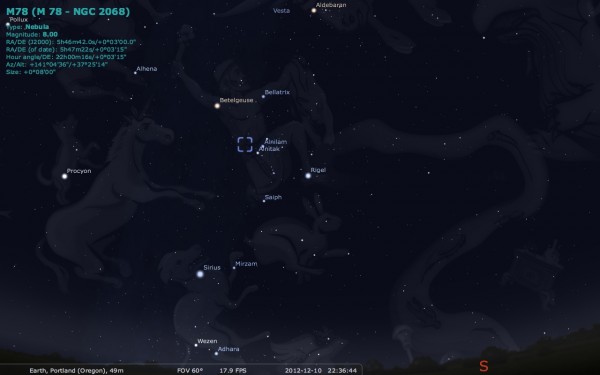 The three blue stars on Orion's belt are unmistakeable in the night sky: bright, prominent and very close together. But rather than pointing you towards these stars, I'd like to to look just a couple of degrees away from the star on the end, Alnitak (the brightest O-class star in the sky), up towards the direction of bright, orange Betelgeuse. 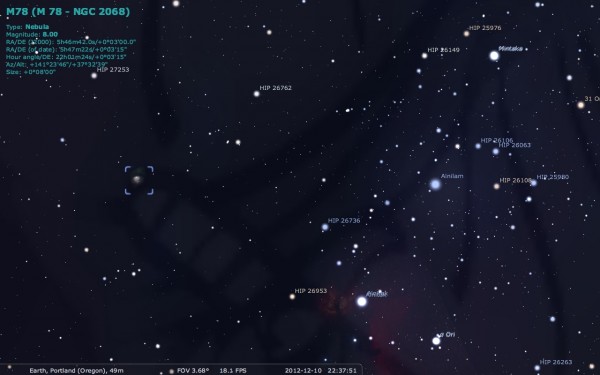 Yes, Alnitak has two very famous (and prominent) nebulae associated with it: the Flame Nebula and the Horsehead Nebula. But north of Alnitak in the skies is a much lesser known -- but again, no less spectacular -- nebula known simply as Messier 78. 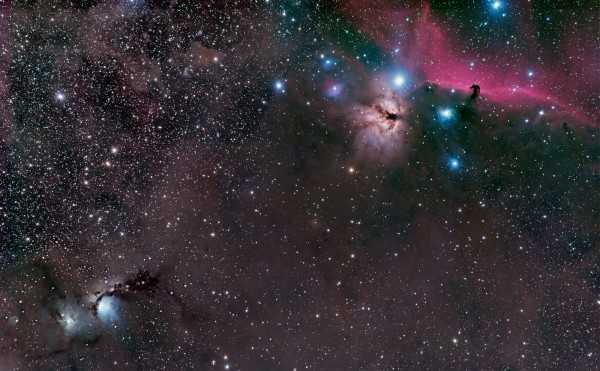 The blue, dusty "fuzzball" in the lower-left of the image above is the Messier object -- M78 -- that we're looking at today. Unlike a prior nebula we've looked at, this one isn't red in color at all, but is rather a distinctive blue color. Visible even in a low-power telescope or a steady pair of binoculars, this nebula takes up about the same amount of real estate on the sky as the full Moon does, although it's literally millions of times dimmer. 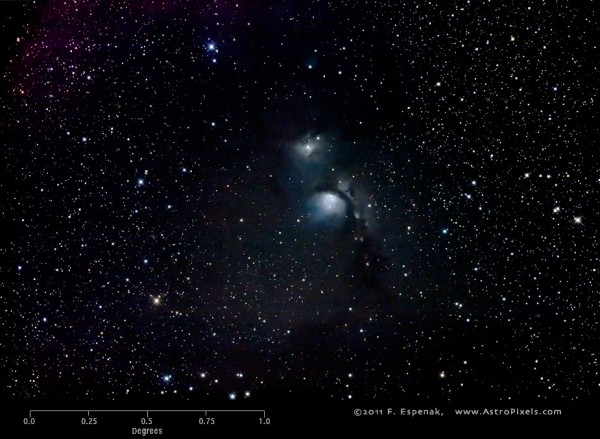 Why is it blue? Why are other nebulae (like the horsehead) loaded up with crimson and magenta but this one isn't?

When you have a vast collection of dust in interstellar space -- which happens quite frequently -- there are really only three things it can do. The first (and most simple) is that the dust can simply block the light coming from the stars behind it, which creates both the "horse's head" in the Horsehead Nebula and the dark valleys in Messier 78. The second is that the dust can heat up so much that it ionizes the gas, which emits that characteristic pinkish-red glow as electrons recombine with the atomic (specifically, Hydrogen) nuclei.

But the third -- and the reason that Messier 78 is dominated by the color blue -- is simply that there are bright, blue stars present either among or very close to the gas & dust, and the dust reflects that light back towards our eyes. 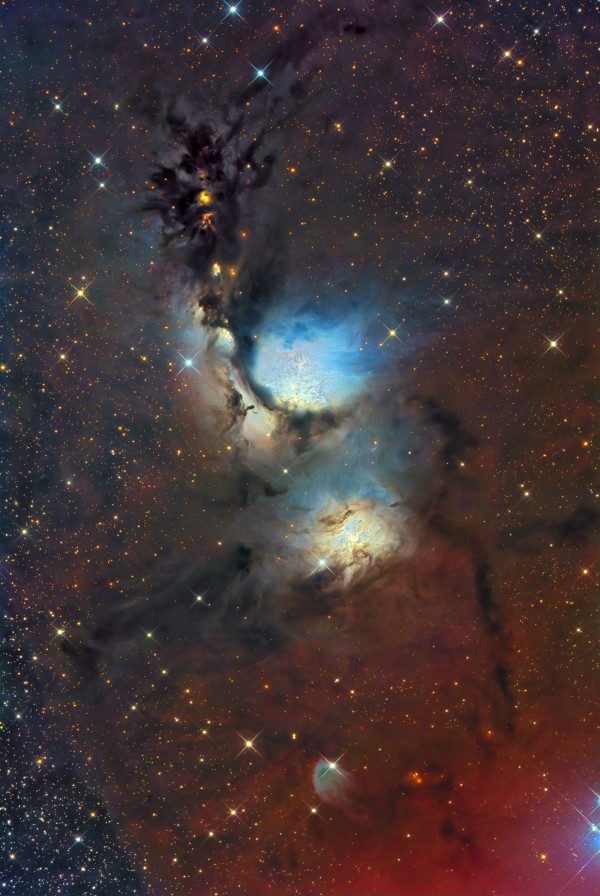 This nebula is primarily a reflection nebula, where there's very little ionized gas but a lot of reflected light. The energy of the blue stars are insufficient to ionize much of the gas in the nebula but is large enough to light up a large fraction of the gas, sending that blue light 1,600 light years across the galaxy to our eyes. (And yes, the dust is better at reflecting blue light than red light, which is why most dust is invisible to infrared light!)

Of course, outside of this nebula, the much more diffuse clouds of gas are sufficiently ionized to create that characteristic reddish glow, clearly visible in this long-exposure, wide field image of M78. 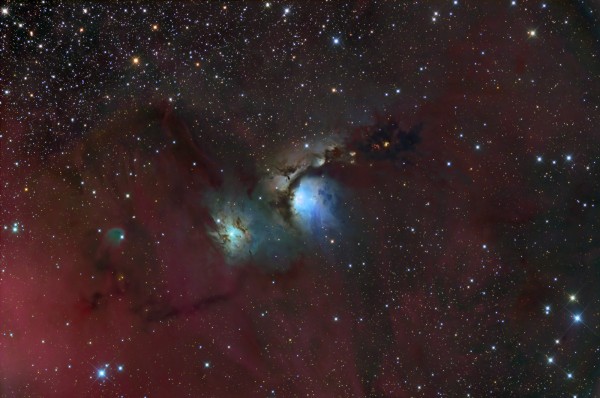 Messier 78 is the brightest and bluest of all the nebulae visible in the image above. Although while M78 is loosely used to refer to the entire complex, you're actually looking at an extremely rich region of space, where a whole slew of interesting things are happening. This is more apparent if we look in infrared light, where all the light-blocking dust is inconsequential, as infrared radiation passes right through it, unaltered. 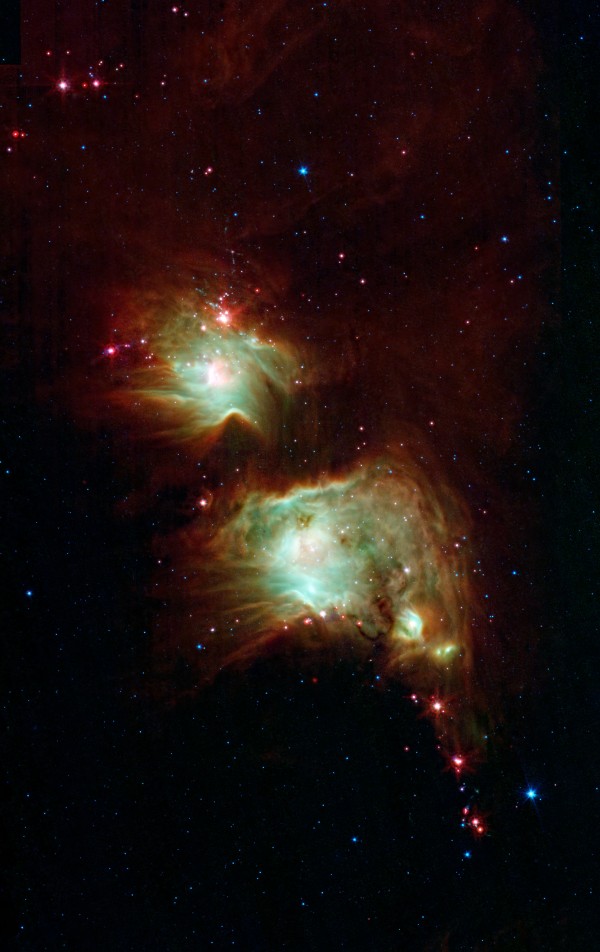 The largest "reflection" region is Messier 78, while there are actually three smaller ones: NGC 2064, NGC 2067 and NGC 2071. The reddish starlike objects are  young stars still in the process of formation, but by combining an infrared view like this with the deepest visible-light view ever taken (full-size monster here), we can really get an amazing feel for what's going on. 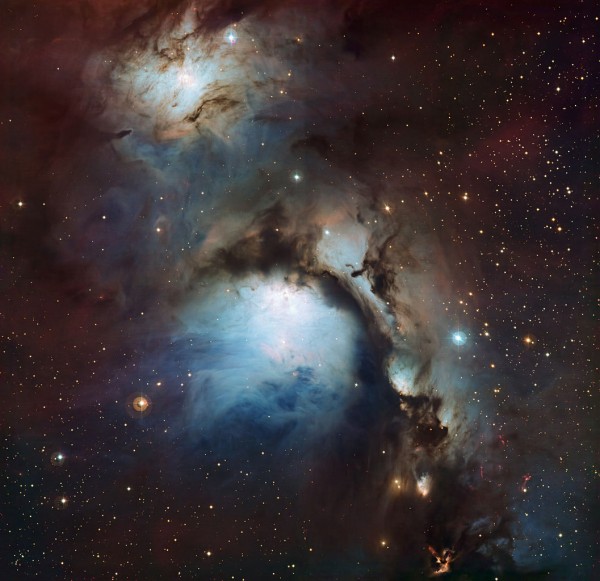 Yes, there are some young stars undergoing the final stages of formation in there, with a few ultramassive, bright blue stars responsible for most of the illumination inside.

The main region of Messier 78 has a very complex dusty structure, that reflects and blocks the light, but very little of it is ionized, as is evident from the dearth of redness in this picture. 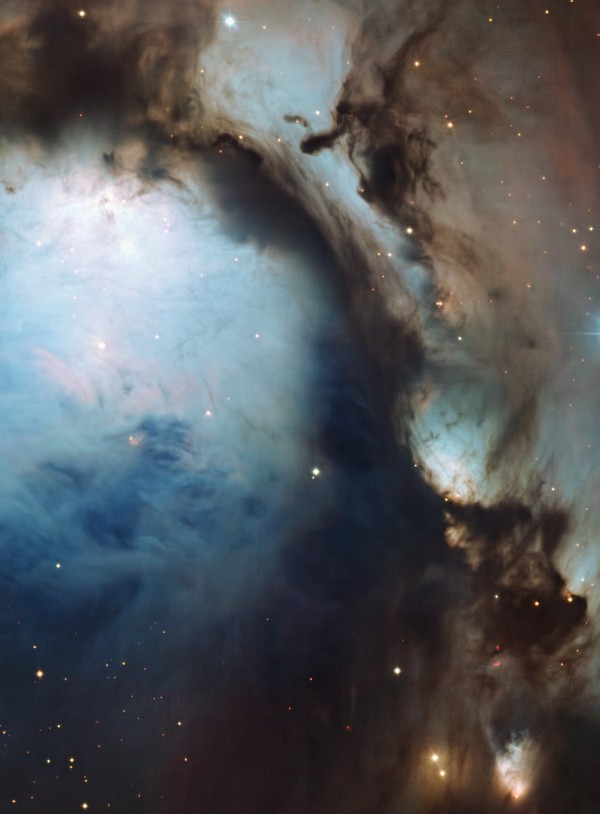 The blue glow combined with the light-blocking dust in front of our line-of-sight gives this main region of M78 a ghostly feel to it, and the evaporating gaseous globules will eventually disappear, showing off the stars beneath them that right now only an infrared telescope can see.

However, the smaller blue region (on the other side) is heavily tainted with red, indicating the presence of ionized hydrogen gas in there. (It's conceivable that there is some ionized hydrogen in the larger region, but that the reflected blue light is so prevalent that it overwhelmingly dominates.) 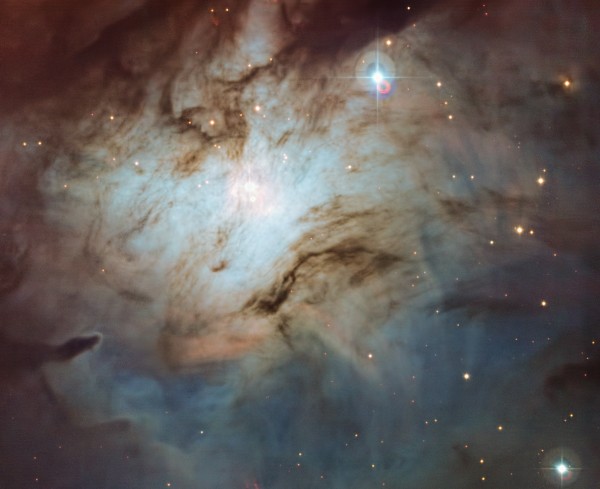 You might look at an object like this and think -- since it was discovered in 1780 -- that there really isn't anything new to be learned about it. Imagine, then, if you were an amateur astronomer/astrophotographer, using only your camera and a small (3") telescope, and yet you noticed a small change in one area of this nebula.

In September, 2003, that's exactly what happened to Jay McNeil, as a new feature suddenly appeared in the great Messier 78 complex! 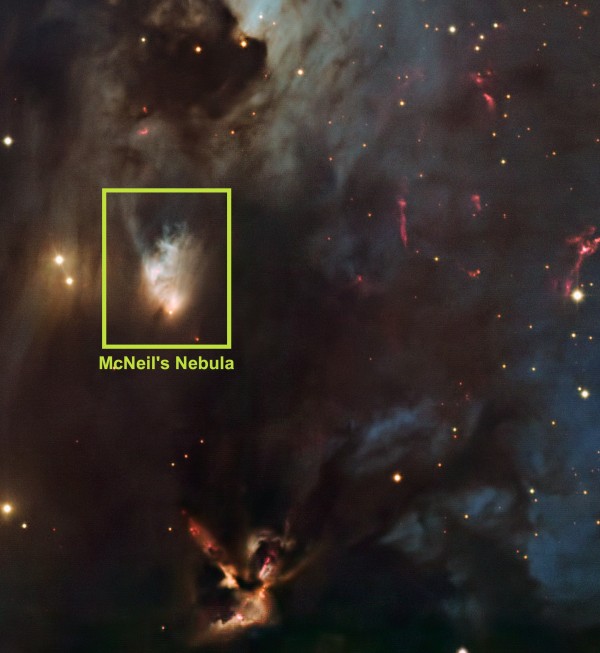 Only 9 years old, McNeil's Nebula now bears the name of its amateur discoverer. It turns out this is a variable nebula, and has turned off-and-on multiple times since its discovery. (And possibly once before!) Wonder what that feels like? Put yourself in McNeil's shoes:

"The idea that this thing, first seen on my 3-inch telescope, which one can easily hold using one hand, would be observed, within 48 hours, by a telescope of 342 tons was absolutely staggering." -Jay McNeil

In a great composite, you can truly get an appreciation for what lies inside of the entire thing. 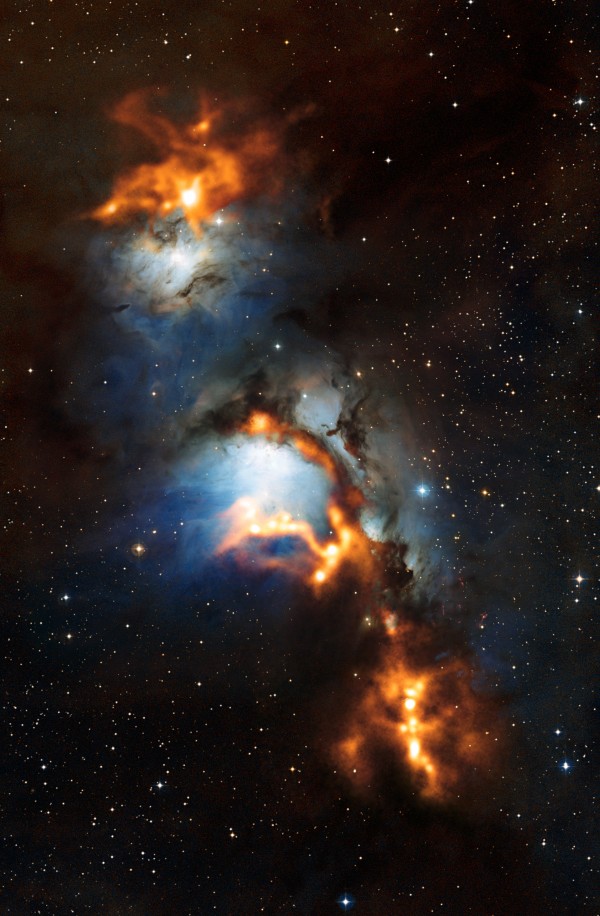 All of this -- the forming stars, the light-blocking dust, the diffuse, ionized hydrogen and the dominant, bright blue reflection -- is just one tiny fraction of the massive, Great Orion Complex hundreds of light-years across, and the small piece we looked at today makes up the 78th object in Messier's catalog.

So including today's entry, we've taken an in-depth look at eight of the Messier objects:

Join us next week for just another Messier Monday, where we'll take a look at a great galactic controversy that Messier never anticipated!

If we were to take our really fast spacecraft to the center of this object, and toss a bucket on a rope outside and haul it in, what would be in there? I see so many references to interstellar 'dust', but have no idea what it is. Do we know it's primary composition? How it was created? If it's not gaseous, it is the remnant of a once larger object? How large is the 'average' piece of interstellar dust?

The dust is quite close to a vacuum.

The dust lanes are any material particle that is unionized. Mostly Hydrogen, but a smattering of other stuff out of which an even smaller fraction would be complex molecules, some of which may have collected enough to be called what we here on earth think of as dust-like particles.

Astronomers use "metal" to describe any element other than Hydrogen.

Do not expect us to use other words in the same way as everyone else!

Damn, those are awesome pics! I looked at the wiki for McNeill's Nebula, and it seems it's been switching off & on since the 1960's at least. I wonder if it's possible to watch the light expand through the surrounding gas like a slow-motion pulse next time it switches. It would be interesting to watch a lightspeed wave front moving from far enough away to actually watch it move.

Just to clarify my own misinterpretation.
"Only 9 years old, McNeil’s Nebula now bears the name of its amateur discoverer. "
I thought the amateur astronomer was a 9 year old boy.

"""This is exciting for all astronomers, especially those interested in the birth of stars,"... what he witnessed was a star being born."

Oh, the star is 9 years old (from an Earth observation point of view) but its 1500 light years from earth so 1509 years old.

Checking I find that McNeil was 32 years old and had been an amateur for 20 years, "I have spent countless hours seeking out the darkest of skies and peering into the largest of telescopes at distant galaxies, so who would have known that I would take an image of a famous object with a small telescope from my back yard and find a sun-like star being born."

It's not relevant to talk about it being 1509 years old.