Messier Monday: A Diffuse, Distant Globular at the End-of-the-Marathon, M72

"Every star may be a sun to someone." -Carl Sagan

Welcome back to yet another Messier Monday! Each week, we highlight one of the 110 deep-sky objects that make up the Messier catalogue: Charles Messier's legacy to comet-hunters and amateur astronomers, pointing out some of the most easily visible deep-sky objects as seen from our vantage point on Earth. 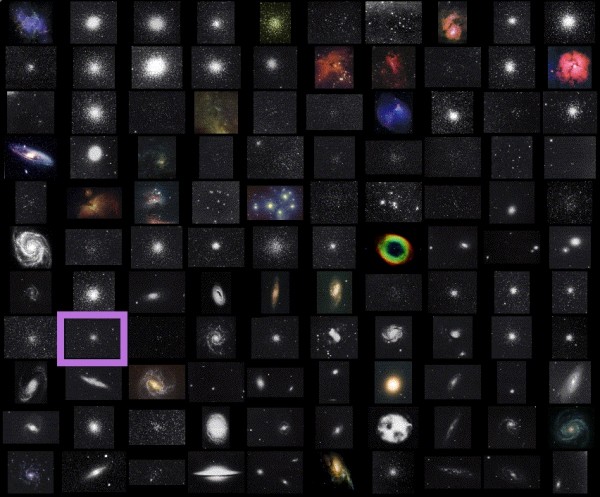 Once-a-year, around the new Moon nearest to the vernal equinox, many amateur astronomers around the world attempt to view all 110 objects in the same night. Last week, we highlighted the first object marathoners go for just after dusk: The Phantom Galaxy, M74. I promised you this week we'd take a look at the last one to hit in the pre-dawn skies, which is typically the globular cluster M30. But we've already looked at it, and almost no one will be able to see it for another couple of weeks! Instead, let's take a look at the last one you're likely to actually be able to find: Messier 72. 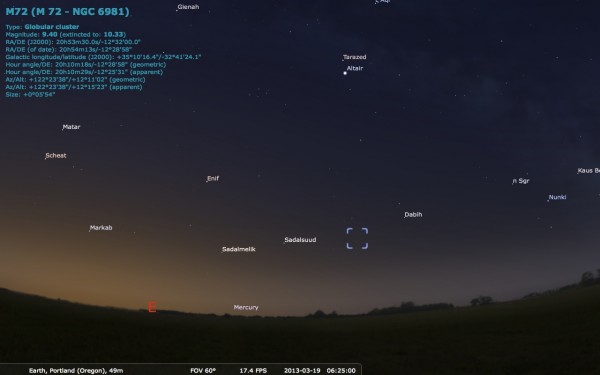 Just an hour or so before sunrise, if you look to the East, you'll be able to see the two brightest naked-eye stars in the constellation of Aquarius: Sadalsuud and Sadalmelik. If you draw an imaginary line from Sadalmelik to Sadalsuud and then head just a couple of degrees down towards the horizon, a faint globular cluster will greet you if you know where to look. 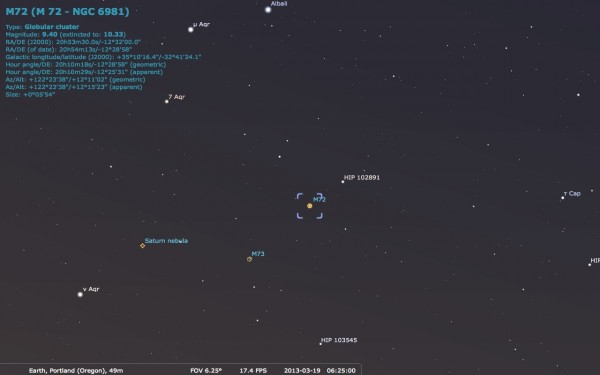 That's one of the last Messier objects to crest the horizon in the pre-dawn skies, the faint and diffuse globular cluster Messier 72. It was discovered by Messier's collaborator, Meschain, in August of 1780, and then observed by Messier himself in October. It looks fairly compact, and in any telescope smaller than about 8", you won't be able to resolve stars. No wonder Messier thought it was a nebula! 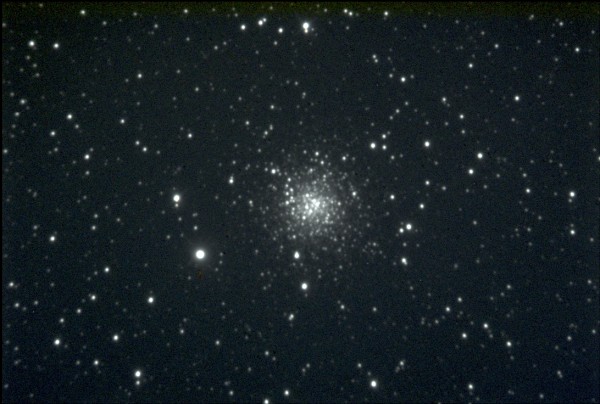 At 53,000 light years away, it's about twice as far away as the galactic center is. In fact, the only reason it's in Messier's catalog at all is because it's one of the most intrinsically bright globular clusters in the galaxy, and yet is the third most diffuse globular cluster in Messier's catalogue. Notice how it doesn't seem to have an extraordinarily dense core compared to some of the other globulars we've looked at. 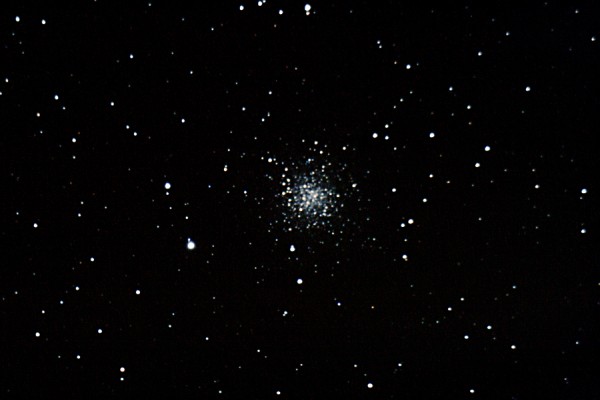 Through a much larger telescope, you can really see both bright and faint individual stars. But unlike most of the other Messier objects, where seeing down to magnitude 9 or 10 will get you some detail, you can't even begin to resolve even the brightest of the individual stars here until you can see deeper than magnitude 14. That means you'd need a telescope capable of finding Pluto to resolve individual stars here, and that you're looking at stars that are literally a million times dimmer than the brightest naked-eye stars. 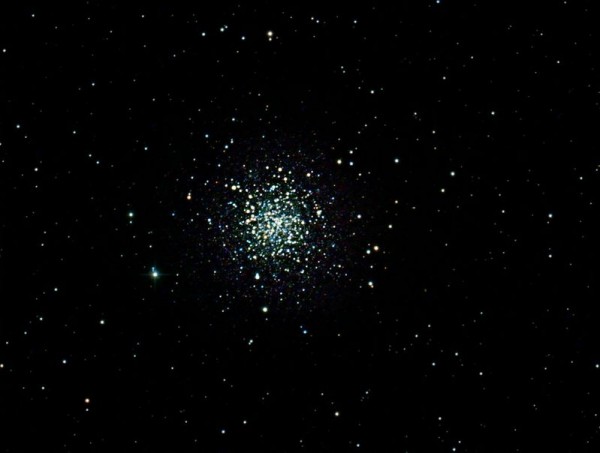 Image credit: Rick Beno of Conferring with the Sky Observatory.

Above, a 24" telescope reveals the huge variety of colors found among the individual stars. Every star you see here is about twice the age of our Sun, at 9.5 billion years old, while a total of around 170,000 solar masses make up this cluster.

As is the case with all old globular clusters, there's a somewhat higher concentration of bright stars towards the center, with the outskirts being more diffuse and less dense. 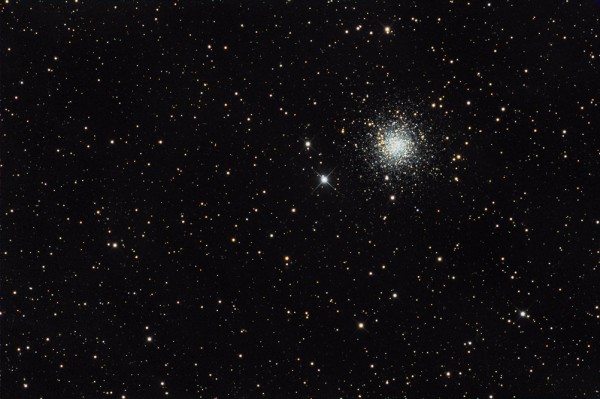 It's also one of the smallest Messier objects in terms of angular diameter on the sky, especially if we're only talking about the core. Just 2.5' across (or about 4% of one degree), the small angular diameter of this cluster is -- in at least one way -- a blessing-in-disguise: it's a perfect candidate for imaging by the Hubble Space Telescope! 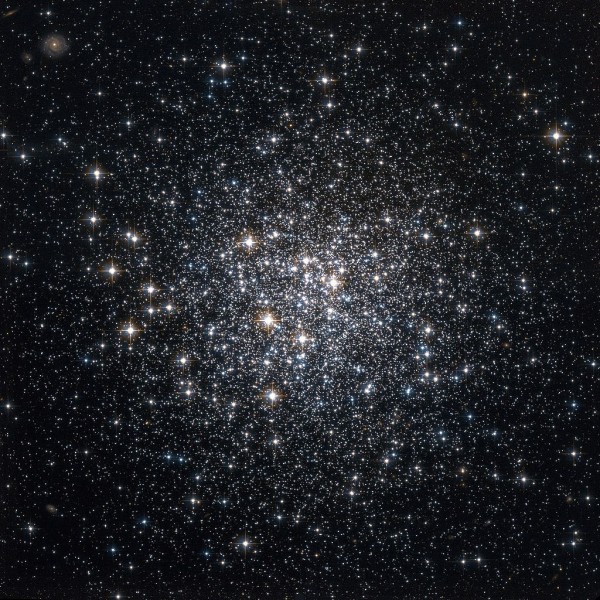 This image contains somewhere around 100,000 stars, and -- as always -- it's the central region of this globular cluster that's the densest. Despite being so diffuse (it's class IX out of XII, so definitely on the more diffuse end), the inner core of this cluster is some 23 times as luminous as our  local stellar neighborhood is.

You can easily see this by taking a zoomed-in view, courtesy of Hubble. 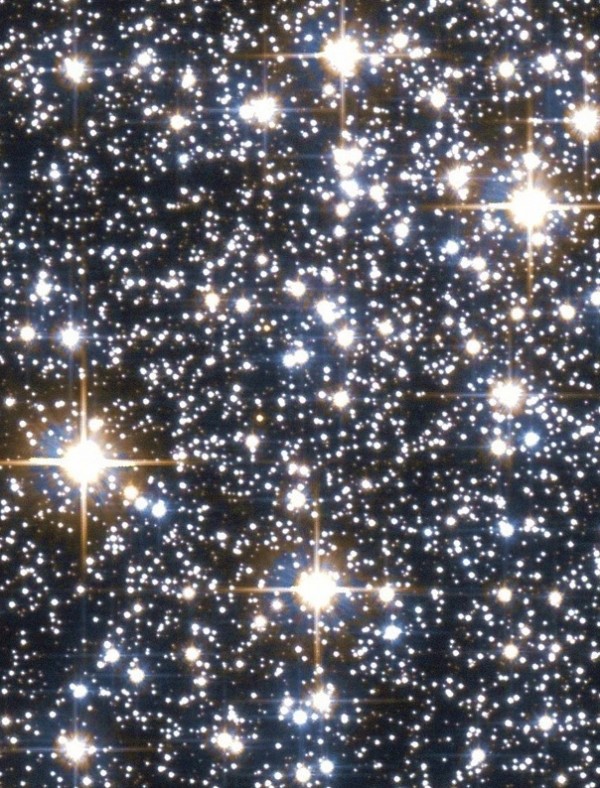 And those of you who know me well know my affinity for searching for background galaxies around Hubble images. I've been able to find what appears to be a spectacular grouping of some large, spiral galaxies on the outskirt here; any ideas as to what the IDs of these galaxies are? 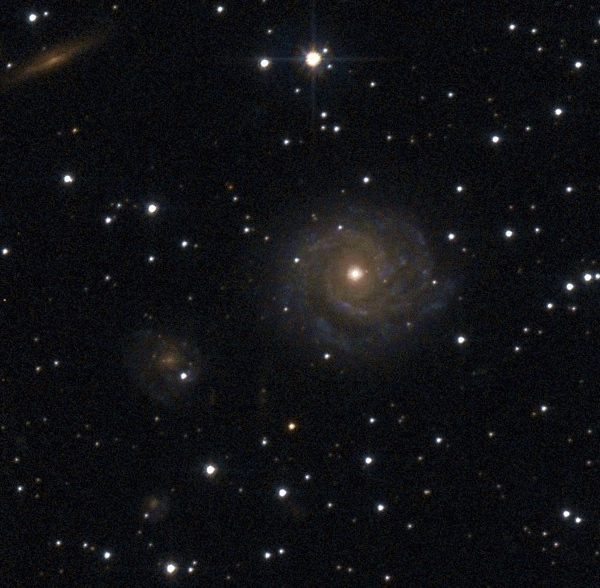 Thanks for joining me for another Messier Monday! Don't forget to take a look back at all our prior installments; including today's entry, here's what we've taken a look at so far:

As always, if there are any objects you'd especially like to see, feel free to ask for them below, and don't forget to join me next week for another Messier Monday!

The last but one picture (zoomed-in view) appears to show the disks of a number of stars. But all stars other than the sun are point sources even for the most powerful telescopes, right? Can someone explain why we appear to see the disks of so many stars in this and similar pictures?

@Vijay: Telescopes and cameras have a response, known as the point spread function, to pointlike sources. The typical point spread function has some finite width to it; even in the best cameras it will typically be two or three pixels in radius. That's enough, especially when you zoom in, to make a point source look like a disk.

1) Telescopes have diffraction. The non-infinte objective causes a diffraction pattern to arise on the focal plane and for telescopes, this is called the "Airy Disk. The Dawes limit is usually used to describe the limit of resolving power of a telescope by this effect. The number of arcseconds that two point sources have to be distant from each other in angular separation to be discerned as two different points is:

where s = angular separation in arcseconds
D=aperture of the objective in mm.

This airy disk may or may not be bigger than your CCD sensor pixel size.

2) CCD sensors for cameras and colour have a low-pass filter that spreads incident light on the surface so that several pixels are illuminated by a source and allow the colour of that light to be discerned. B&W CCD sensors may also have this to allow for bad pixels and cosmic ray contamination to be discerned from genuine image.

Whether you want this diffraction to be apparent on the sensor depends on what you want to do:

Webcam images of planets, for example, try to get the airy disk less than 1 pixel (usually 1/2 - 1/4 a pixel) so that the effects of stacking can create sub-pixel resolution by dint of weighted reinforcement of the underlying signal.

Deep Sky Objects are normally done with the seeing being about 1 pixel, and since most locations have a seeing of 2-4 arc seconds (if they are a GOOD location) and the airy disk of a telescope objective of 110mm (about 4") is 1 second of arc, the diffraction is less than your sensor pixel size.

Note: a properly collimated telescope will produce a round and symmetrical airy disk, the diffraction caused by the CCD low-pass filter need not be radially symmetric, only unbiased.

Note that in the photographic age, the image was somewhat affected by diffraction because the photographic cell was a transluscent gel and the photon would travel through some distance to get a reaction from a reactive crystal, and sometimes it would reflect within.

I would just like to add, to Wow's great explanation, that these could also be further increased if there was post processing done (and usually it is done).

As you increase brightness or exposure or gamma, in order to get faint objects to become visible, the more blown out are brighter sources.