"Dream no small dreams, for they have no power to move the hearts of men." -Johann Wolfgang von Goethe

Welcome back to yet another Messier Monday here on Starts With A Bang! Each Monday, we highlight one of the 110 deep-sky objects that make up the Messier catalogue, showing you where and how to find it in the sky and telling you a bit about the history and the physics/astrophysics behind it. Each one tells its own unique story, and today's distant wonder is no exception. 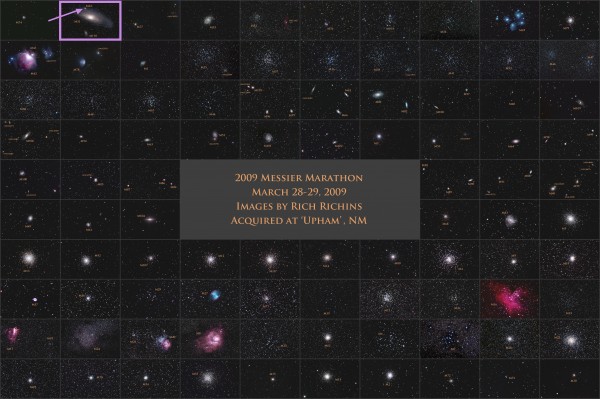 Image credit: Rich Richins, of all 110 Messier objects (in no particular order).

On a virtually moonless night like tonight, skies are at their darkest, which makes for the best conditions for observing the faintest of all the deep-sky objects: the galaxies. A full 40 of the 110 Messier objects are galaxies: more than any other type. And while we typically think of these as great, large, extended objects, there's an entire class of galaxies that's far more numerous than the spiral and elliptical giants of your imaginations: the ultra-abundant class of dwarf galaxies.

Today, let's take a look at the smallest of all the galaxies in Messier's catalogue, Messier 32. Here's how to find it. 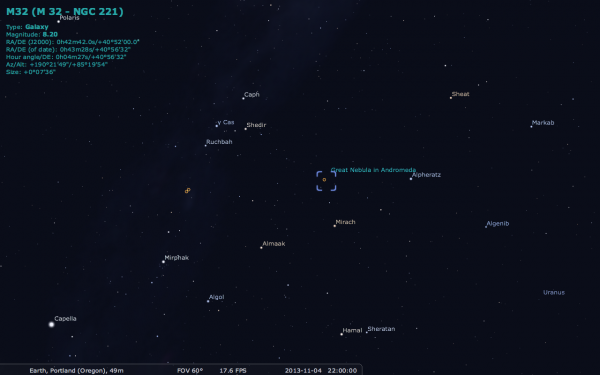 After sunset tonight, the prominent "W" of the constellation Cassiopeia towers over the northern hemisphere, with a row of four bright stars -- Mirphak, Almaak, Mirach and Alpheratz (from L-R) -- below it. Take note of where Mirach is in the skies and navigate back towards Cassiopeia, and Messier 32 will unveil itself, if you know where to look. 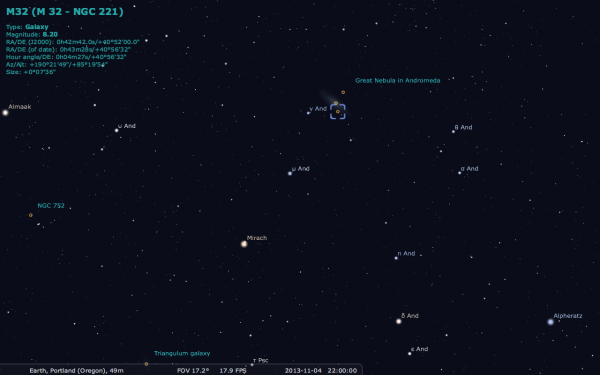 Navigating away from Mirach back towards Cassiopeia, the naked eye stars μ Andromedae and, a little farther on, the slightly dimmer ν Andromedae will point the way. In fact, if you can find ν Andromedae, you're practically there; under dark skies, the Great Nebula in Andromeda -- Messier 31 -- will be unmistakeable.

But if it's Messier 32 you're after, you'll need to continue the hunt just a little further. First, take note of another naked-eye star near μ and ν Andromedae that makes an isoceles triangle with them: 32 Andromedae. 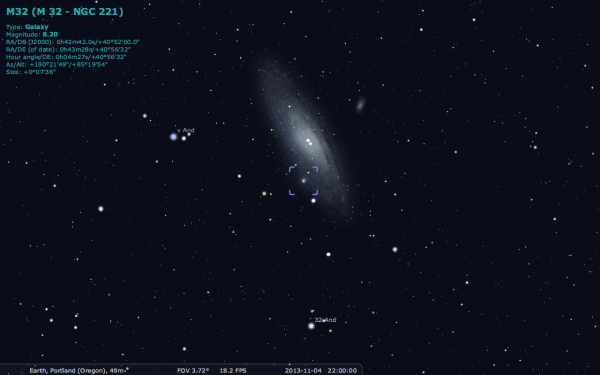 Because if you can locate both the Great Andromeda Galaxy and 32 Andromedae, all you have to do is look at the outer "edge" of the Andromeda Galaxy along the imaginary line that connects its center to that star, and you'll see a small, diffuse cloud.

It'd be easy to mistake it for a giant globular cluster, but it isn't; that's a galaxy all its own! That's what Messier 32 is. 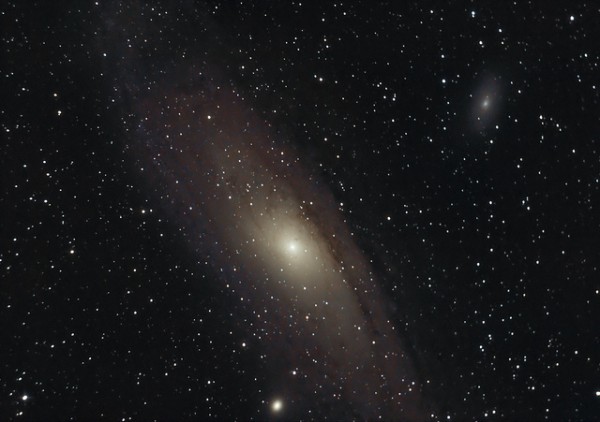 What you're looking at is a tiny elliptical galaxy, an object that's only 6,500 light years in diameter at its widest point. There was controversy for a while about whether this galaxy was actually a satellite of Andromeda or a much more distant background galaxy, but since we've measured individual stars within it -- including the characteristic evolving red giant stars that are so good for indicating distance -- we've found that it's only 2.5 million light-years away, nearly the same exact distance as Andromeda. (And for the record, we still aren't sure which one's closer!) 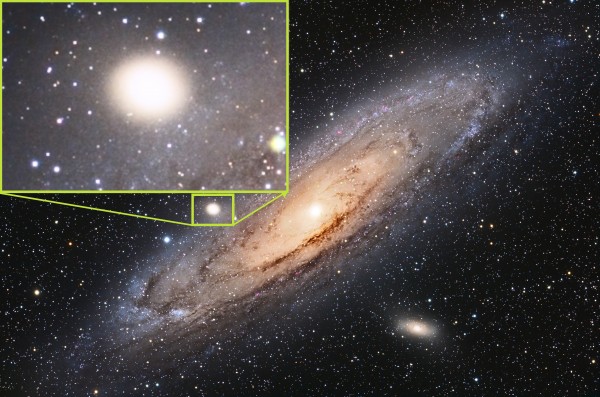 Messier 32, on its own, is an incredibly interesting object for its closeness, compactness, and a few other surprising properties. First off, there are only about three billion solar masses in there. Yes, that's a huge number, but consider that's only about 0.75-1.5% of what's in the Milky Way. And yet -- in such a small volume -- the star density in there is tremendous! 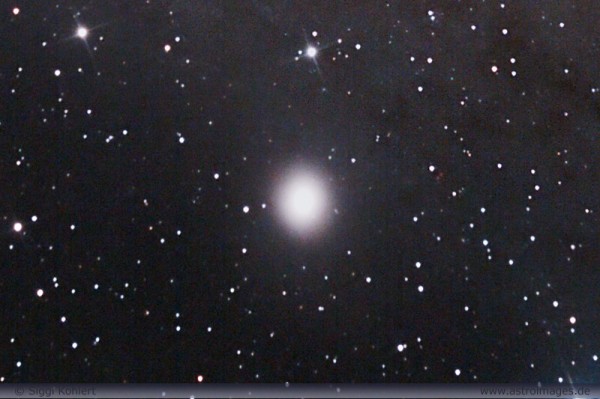 The densities of stars at the very core of Messier 32 are staggering: whereas you need to go a few light years in any direction to run into a star in our neighborhood, at the very central core of M32, you only need to travel about a thousandth of that distance. Because density scales as distance-to-the-negative-three power, the stellar density at the center of M32 is some 100,000,000 times what it is in our neck-of-the-woods! 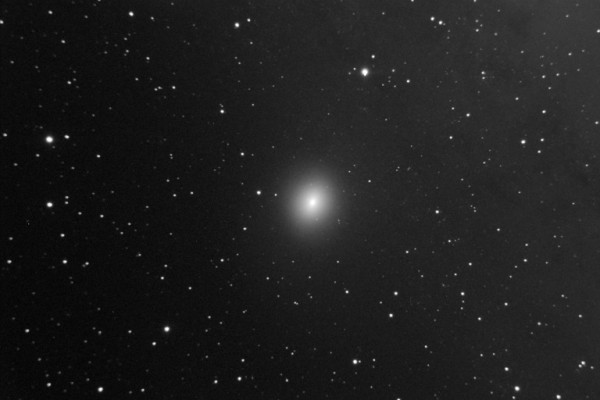 And what's even more surprising is that, despite the tininess of this galaxy, there is a supermassive black hole at its core, and it's practically the same mass as the one at the center of our galaxy, at between 1.5 and 5 million solar masses! To Messier's eyes, it was barely noteworthy at all:

Small nebula without stars, below & at some minutes [separation] from that of the belt of Andromeda [M31]; this small nebula is round, its light fainter than that of the belt. M. le Gentil has discovered it on October 29, 1749. M. Messier saw it, for the first time, in 1757, & he has not found any change.

But to our advanced instruments, we know it's full of older stars, free of dust-and-gas, and going to merge with its much bigger sister (Andromeda) sooner rather than later! And thanks to the power of Hubble, we can easily resolve individual stars within it! 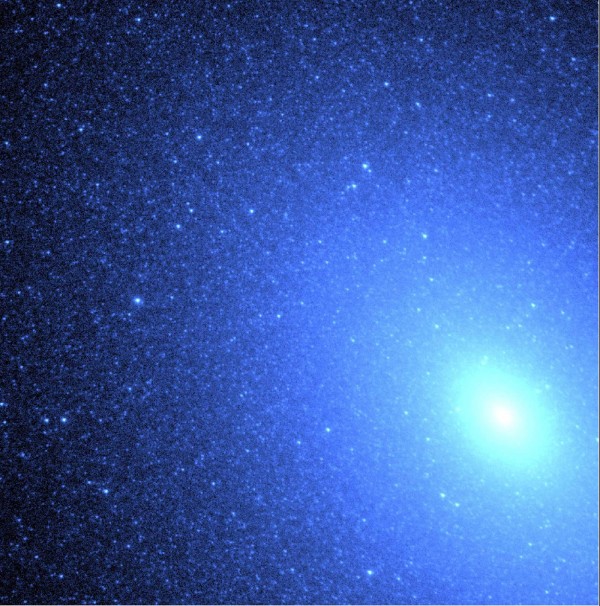 This image is just 175 light-years on a side, just 3% of the scale of Messier 32! And as you can see, there's an excess of ultraviolet radiation coming from the very core. Why could that be? We think that tidal effects from Andromeda have caused a burst of activity at the center, either from a very recent, last gasp of star-formation before it gets torn apart by Andromeda or, potentially, because the central region is overwhelmed with stellar mergers and the formation of blue stragglers!

Either way, when you zoom all the way in, Hubble can reveal some amazing things! 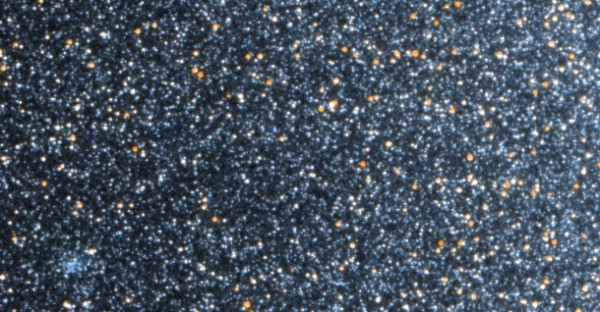 There are star clusters (lower left), an abundance of giant stars (yellow/red), and a huge number of individual faint, dim older stars! It's only a matter of a few hundred million years before this is totally torn apart and consumed by its larger neighbor within our local group, but in all probability, not even one star from within it will collide with another in Andromeda!

And with that epiphany, we’ll wrap up another Messier Monday! Including today’s entry, we’ve looked at the following objects:

Come back again next Monday, where another deep-sky wonder, and another unique story from the Universe, awaits you! Only here, only on Messier Monday!

Are there any studies to see if there is a tail of stars between M32 and the Andromeda galaxy? It would seem that many of the less gravitationally bound stars of M32 could have been stripped away by previous interactions with Andromeda.

In places like that you don't need to travel ftl to have interstellar high adventure. Though of course the planetary distribution might be different from what it is in our neck of the woods . . .

@ ^ ScentOfViolets : I hope I'm wrong, but I suspect that especially towards the core, the stars being so close to each other may make it very hard for planets to form because of the stellar winds especially from the O-B type blue giant (e.g. blue straggler) stars and gavitational fields from frequent close encounters.

It also sadly seems probable to me anyhow that even if such planets did form the tight squeeze and close orbits of the central stars here would make their orbits unstable and prone to regular catastrophic disruption.

Therefore I suspect that in such compact dwarf galaxies especially at their cores exoplanets are very rare if present at all. This seems to be borne out by the relative lack of exoplanets discovered so far despite a number of searches in the similar objects, the globular clusters where as far as I know only one planet "Methuselah" or PSR B1620-26 b has ever been found.*

But, as I said, I hope it turns out I'm wrong about this!

" .. we’ve found that it’s only 2.5 million light-years away, nearly the same exact distance as Andromeda. (And for the record, we still aren’t sure which one’s closer!)"

M32 looks like its in the foreground and thus slightly closer to me - there don't seem to be any stars from Andromeda in front of it indicating it is just marginally closer I'd say. Have any studies been done on whether any stars seemingly part of M32 are actually orbiting in Andromeda and thus indicating its in the background here? Could that be one way of determining it or would it just take too long for such an orbit to become apparent even using the oldest records we have?

* A.k.a. "The Genesis Planet" discovered in Glob. Messier 4 orbiting a pulsar and white dwarf - see :

Globular clusters tend to be very old with population II stars poor in metals, therefore unlikely to have any or enough rocky planets for life as we know it.