"Being born in a duck yard does not matter, if only you are hatched from a swan's egg." -Hans Christian Anderson

Welcome back for another Messier Monday! There are 110 deep-sky objects in the Messier catalogue, some of the most prominent night-sky fixtures, as seen from Earth, running the gamut of astronomical phenomena from within our galaxy and beyond. Each week, we pick a new one to place under the spotlight, examining what it is, what we know about it, and how to find it, among other spectacular facts. 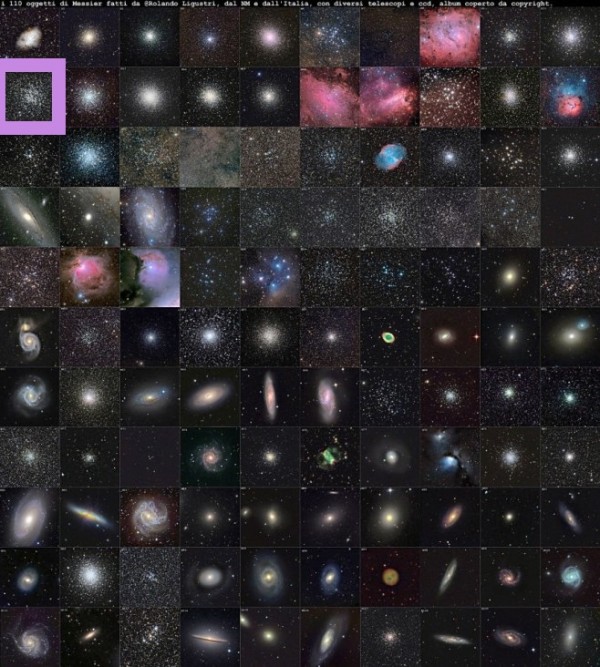 This week, we're taking a look at one of the most prominent star clusters in all of the night sky: the Wild Duck Cluster, Messier 11. If you look towards the southern part of the sky after sunset, you'll be able to find this gem, located right in the plane of our galaxy. 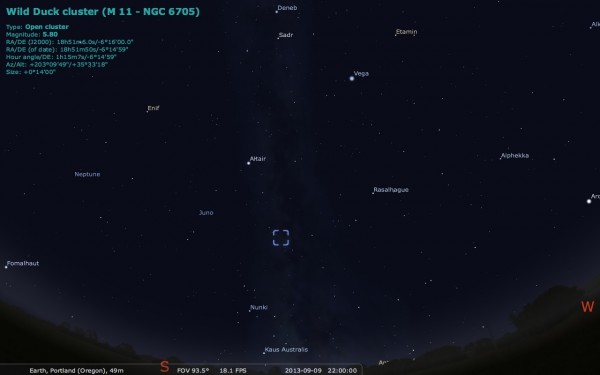 Looking low above the southern horizon shortly after sunset, you might recognize the teapot asterism in Sagittarius. Looking high above the horizon, you'll see the familiar Summer Triangle, with Altair coming closest to the southern horizon. And if you've got dark enough skies after the Moon goes down, you'll even see the disk of the Milky Way form a line connecting the triangle with the spout of the teapot.

If you want to find Messier 11, look halfway between Altair and the teapot, and there will be some stars to help guide you. 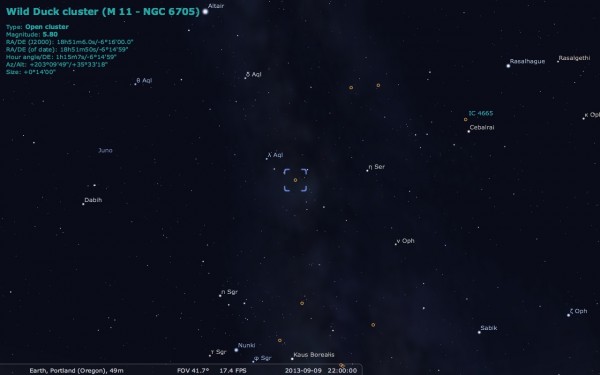 The blue star, λ Aquilae, is an unspectacular star as seen from Earth, but it outshines all the others in its vicinity. Just slightly to the southwest of it, you can see another prominent star, 12 Aquilae, and then yet another, η Scuti. Head just a little farther in the same general direction, and you won't be able to miss a bright, fuzzy collection of stars: that's Messier 11, the Wild Duck Cluster. 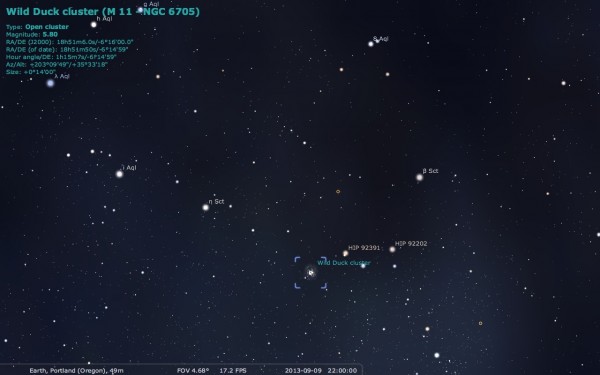 What would this look like with an actual, wide-field astrophotography setup? Thanks to Stephen Rahn, you can see for yourself! 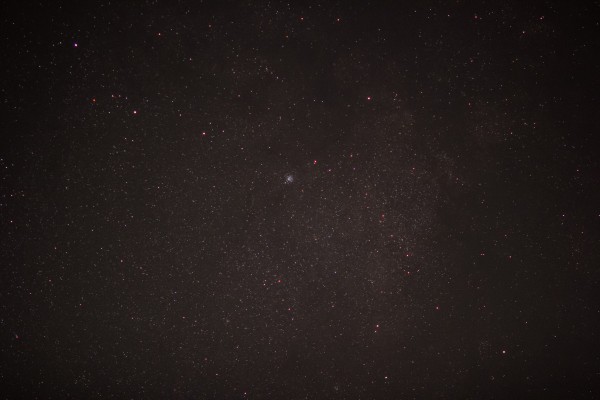 That fuzzy guy in the middle of the photo above is Messier 11, and it's actually -- though just barely -- visible to the naked eye. Of the open star clusters visible from Earth, this is one of the most compact, densest, and richest of them all! 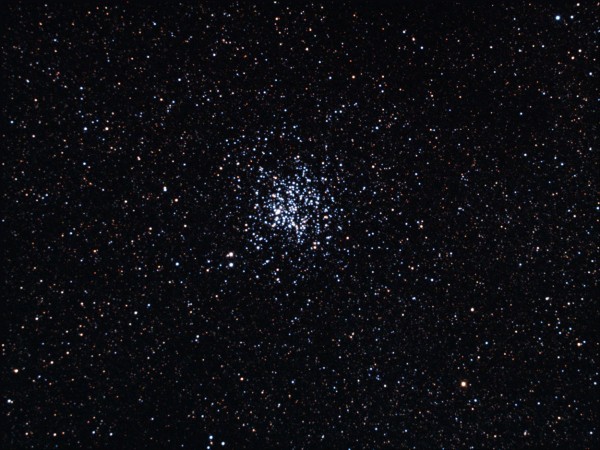 Open star clusters form from the collapse of a molecular cloud of gas, typically form a few hundred to a couple thousand stars, then gravitationally dissociate over a time period of a few hundred million years to a billion years or so.

Well, Messier 11 is definitely on the heavy side of this! 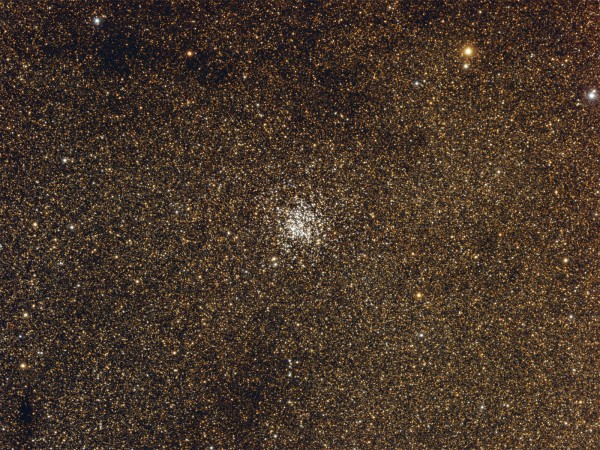 With at least 2,900 stars inside and at a somewhat advanced age of 220-250 million years, this is known as the Wild Duck Cluster because the brightest stars, as viewed through a low-power telescope, appear to take on the V-shaped silhouette of a flock of flying ducks!

In reality, a close-up shows a much more complicated structure to the stars inside. 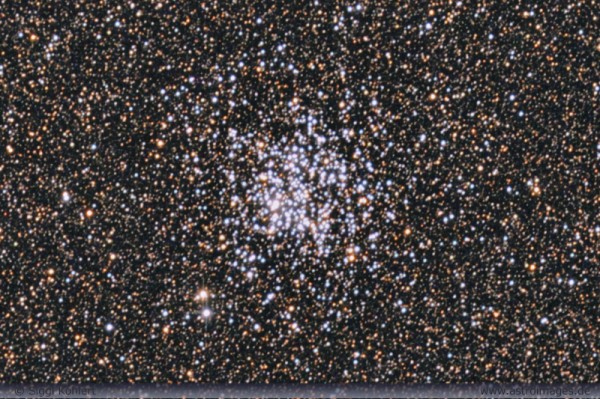 A rich mix of blue, yellow and red stars lie inside, with the blue and yellow ones shining most brightly. This is another particular difficult cluster to count the exact number of stars in, as it's difficult to tell what's a background star from the galactic plane and what's a dimmer, redder star that's natural to the cluster.

But the bright yellow-and-red ones are giant stars: stars that have run out of hydrogen fuel in their core and have expanded to become giants, much like our Sun will. 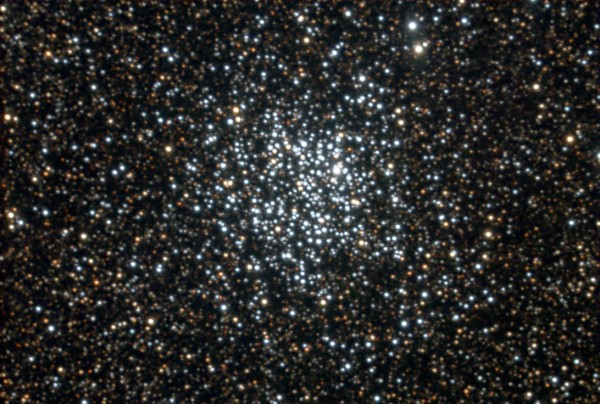 Only, the Sun will take 10-to-12 billion years to do this, while this cluster has only had enough time for most of the B-class stars to run out of fuel in their core. The brightest main sequence star in there -- or star still burning hydrogen -- is class B8, which is the second-faintest B-class star that there is. (The brightest star overall is a rare white giant star, a temporary stage in the life of a dying red giant star!)

There are also some 82 variable stars in this cluster, which helps us learn about its properties like its distance, age and evolution. 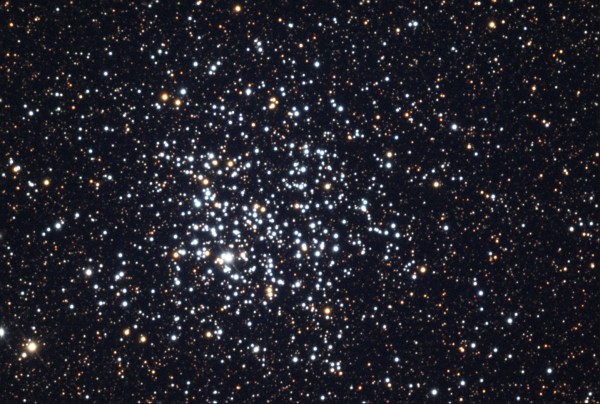 It's about 6,000 light-years away from us, which is a pretty large distance for an open cluster; in fact, it's the most distant open cluster in the entire Messier catalogue that's still visible to the naked eye! 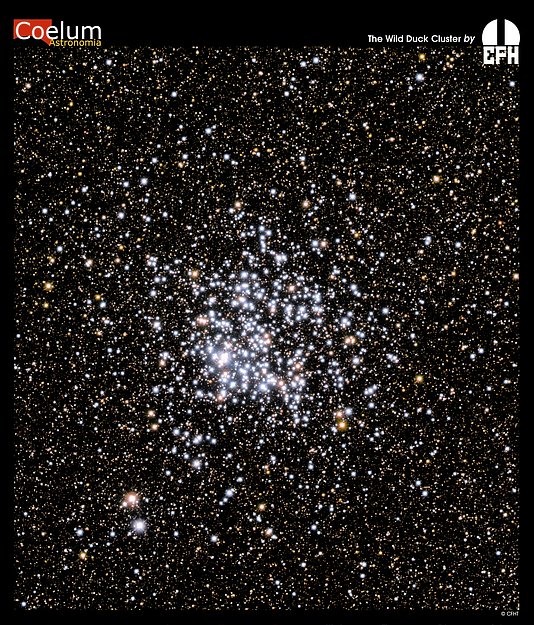 The first Hubble images of this object were only taken last month, and as such, they're not yet available. (Unfortunately!)

But if we can get some good resolution images, you can see beyond the brightest stars that all seem to blur together, and the rich, dimmer stars that will continue to shine long after the brighter ones burn out. 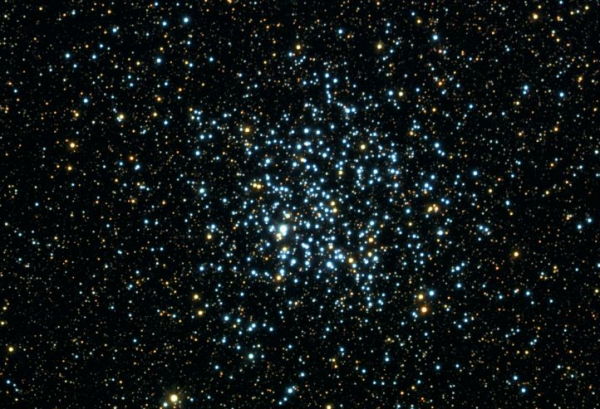 In the infrared, the cooler, redder stars shine far more brightly, and many more become prominently visible, as this 2MASS image shows. 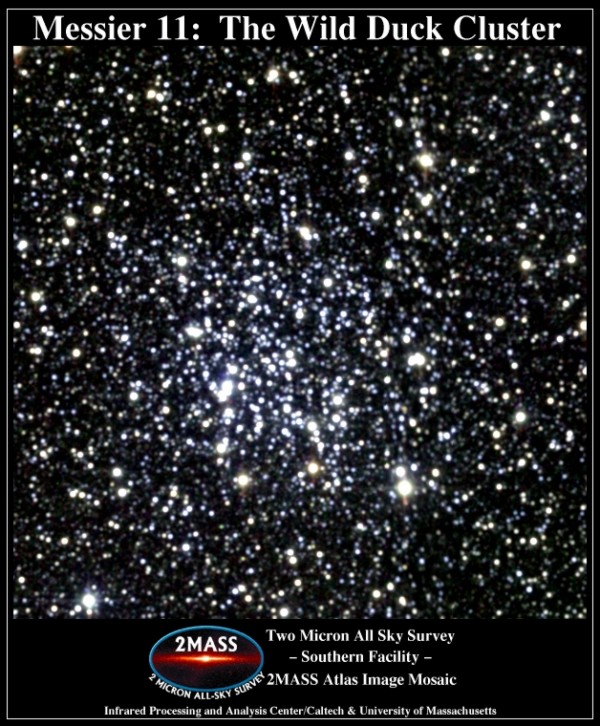 The best-resolution look inside this cluster I've seen comes from Jim Misti, where you can really see the detail of what lies behind the brightest stars in this cluster. As you can note for yourself, it seems like the only limit to the number of stars we see is how long of an exposure we're willing to take!

Over the next few hundred million years, these stars will fly apart due to gravitational interactions, the bluest ones will run out of fuel, become giants, and die in planetary nebulae/white dwarfs, while the lower-mass ones will eventually become strewn about our galaxy, becoming nothing more than ordinary, nondescript stars that live in the Milky Way's disk: the fate of all open star clusters!

And that will wrap up another Messier Monday! Including today’s entry, we’ve taken a look at the following Messier objects:

Come back next week, where we'll have another object for you to find and enjoy in the night sky, and another great cosmic story to tell. Happy Messier Monday!

Hi Ethan,
"There are also some [...] variable stars in this cluster, which helps us learn about its properties like its distance, age and evolution."

Perhaps, could you somewhen explain this a bit deeper, somehow like the insight into an astronomer's work?
Thanks a lot in advance.

Hi Ethan,
"Over the next few hundred million years, these stars will fly apart due to gravitational interactions"

Shouldn't there exist a lot of such clusters just being in process of dissolving? Perhaps one can sort all these clusters related to their grade of dissolution?

Well distance is simple and you probably already know it: standard candles. Variables, depending on why they vary, have an extemely fine balance of forces to be variable and a tiny change in that balance makes the variation very different.

So variables of various kinds are used as standard candles.

When a star is evolving from a main sequence to a giant stage, the changeover happens (cosmically speaking) extremely rapidly and the brightness (therefore mass) of the variable is known to a decent accuracy and therefore the time taken to change is well constrained. That gives the age.

The dissolution of gas works better for very young clusters and dispersion of the open cluster puts a minimum age, and is only approximate (but better than nothing). So other methods are possible, but have their limitations.

I'm not entirely sure about the evolution, however.

ATL formulae, diagrams and much more wording can be used, but that's a very basic outline.

By the way: What are "ATL formulae"? (AgeToLuminosity?? ;-)) Do you have any links for deeper-interested?

It is very interesting that ALL open clusters have a 3-4 ly diameter and up to 20 ly halo with decreasing density.
It seems as if there exists a so far undetected law -- I think, this is usually compensated with related amount of Dark Matter, different from cluster to cluster, right?

Above The Line, SL

It's a term for blogcomments by the blog owner in the post, whereas formatting restrictions in the blog entries added in the comments mean you cannot get the same information density.

The size of that open cluster is based on the fact that star formation has to occur when a cloud collapses and has to have enough mass to create at least one sun (and generally lots more) and has to concentrate that with gravitic infall from that cloud to the centre of mass, which has to fall in by the time ignition happens because at that point, any gas still not condensed enough will be blown away and no longer able to fall in.

And it seems in the milky way, with the dust density it has, gives ~3-4 light years to get enough stellar material to go boom and small enough to collapse before the boom goes boom.

Dark matter won't have any discernable effect given the limitations its ideology requires it to have to explain the phenomena it's created to explain.

I'm afraid for more you'd be better off looking yourself in University libraries on Stellar Physics, the mechanisms start being introduced in Astrophysics courses in the second year of a BSc course and the papers you'd find in a Google Scholar search would give you far too cutting an edge on the idea.

The rough statements I gave in #3 are a potted version of what you can find in popular literature on the subject, for more this may help (sight unseen, but seems appropriate):