Messier Monday: A Galactic Highlight to Ring in the New Year, M96

"Tomorrow is the most important thing in life. Comes into us at midnight very clean. It's perfect when it arrives and it puts itself in our hands. It hopes we've learned something from yesterday." -John Wayne

There's a lot to look forward to on the precipice of the new year, and many of us will be up until midnight to ring it in. Well, if you're up that late, why not step outside and take a look at one of the deep-sky wonders of the Universe that won't be visible in the early part of the night for months! This Messier Monday, a near-moonless sky will greet you until the pre-dawn twilight, and that makes it a perfect time to go on the hunt for the deepest, most extended objects visible in the night sky. 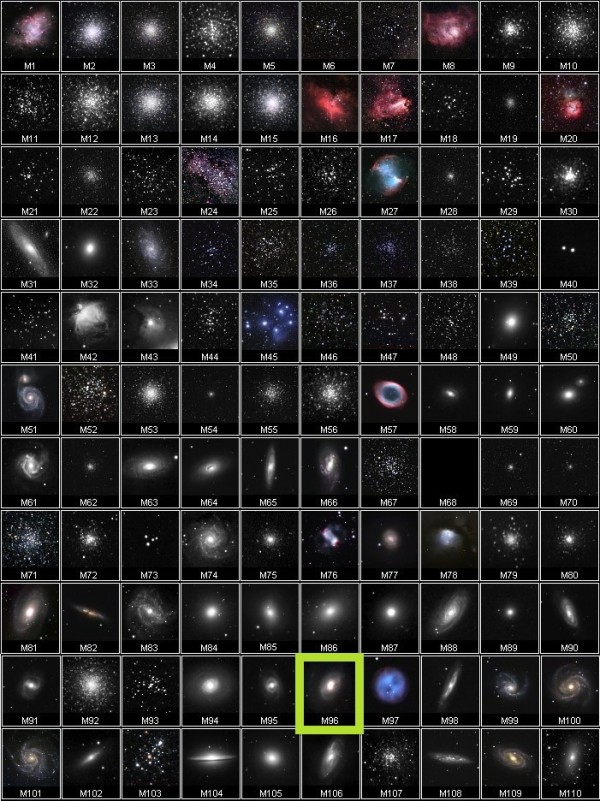 So let's introduce you to the brightest member of one of the many galactic groups visible from Earth: the distant spiral galaxy Messier 96. Here's how to find it at midnight tonight. (Or tomorrow night.) 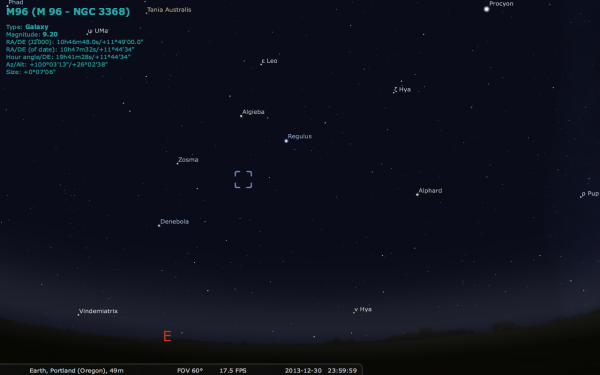 Rising over the eastern horizon at around 10 PM tonight, the constellation of Leo is highlighted by its brightest members, the blue Regulus and Denebola, the 22nd and 61st brightest stars in the night sky. Although there are many other bright and naked-eye stars visible in Leo, looking midway between these two brightest members will get you a long way towards locating Messier 96. 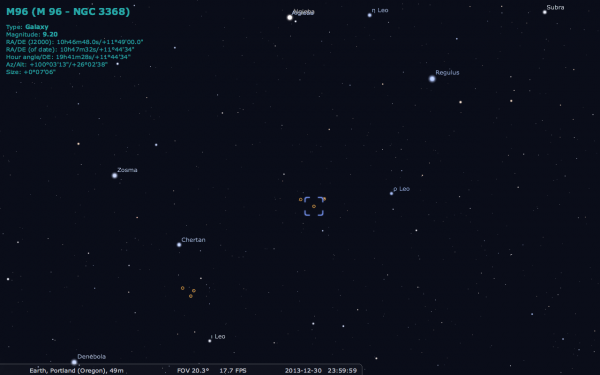 To do a little better, you can draw an imaginary line between Regulus and Denebola and another one between the naked-eye stars Chertan and ρ Leonis, and where they'd intersect is the rough location of Messier 96. But if you need a little extra guidance -- extended objects are dim, after all -- there's a slightly dimmer naked-eye star just a little bit south of the line connecting Chertan to ρ Leonis, and it's less than 2 degrees away from M96. 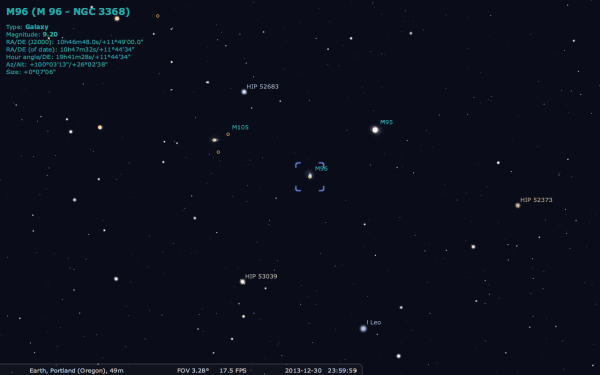 The star 53 Leonis (labeled "l Leo" above) isn't the brightest star in Leo, but it's still easily a naked-eye star. The three Hipparcos stars labeled above are easy to spot in a pair of binoculars or a low-magnification telescope, and if you look with deep, wide-field eyes at this region of space, a wonderful sight begins to appear against the clear, dark skies. (As always, click on all images for a full-size, giant experience.) 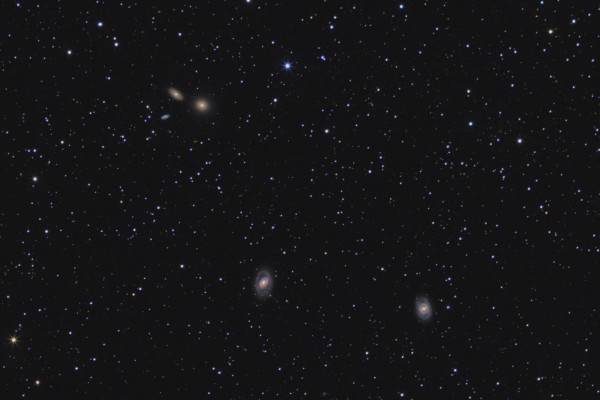 There's an entire group of galaxies here -- the M96 Group -- where Messier 96 is the brightest member at the bottom-center of this image. (The two next brightest, at the upper left and lower right, are the Messier objects M105 and M95.) These galaxies aren't just grouped together visually, they're all located between 35 and 41 million light-years from us, and all receding from us at speeds between 640 and 910 km/sec. This small collection of galaxies is estimated to be somewhat more massive than our local group, even though the individual galaxies are all smaller than both our Milky Way and Andromeda.

But for the rest of today, let's focus not on the group that bears M96's name, but on the individual galaxy itself. 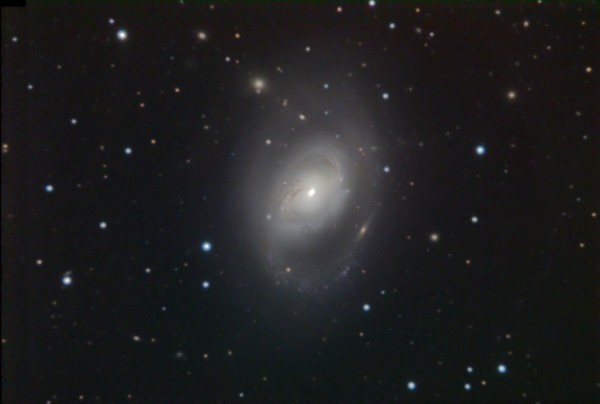 Discovered by Messier's assistant Pierre Méchain in 1781, it was added to Messier's catalogue four days later, where he described it as a:

Nebula without star, in the Lion, near the preceding: this one is less distinct, both are on the same parallel of Regulus: they resemble the two nebulae in the Virgin, Nos. 84 and 86. M. Méchain saw them both on March 20, 1781. 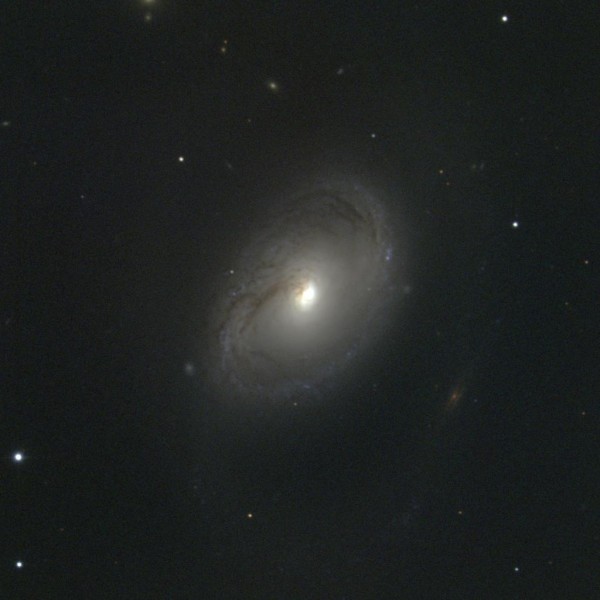 For a relatively close galaxy like this, it's actually quite a challenge, because different types of observations can lead you to different conclusions. You can measure its recession velocity (from its redshift) and use Hubble's law to infer its distance, but there are large uncertainties for nearby galaxies due to peculiar velocity. You can use correlations from its rotation speed (the Tully-Fisher relation) to infer its distance, but the uncertainties are large there, too. Other methods, like Surface-Brightness fluctuations or the Fundamental Plane relation, have large errors at this distance as well. 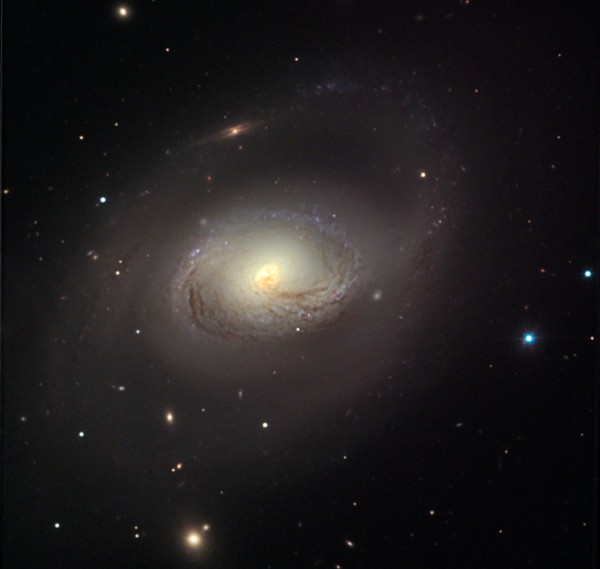 Ideally, you'd be able to resolve individual stars in this galaxy, and simply use what's known about them to measure that distance directly. But for a very long time, that was technologically impossible.

Until, that is, the Hubble Space Telescope came along and did exactly that. 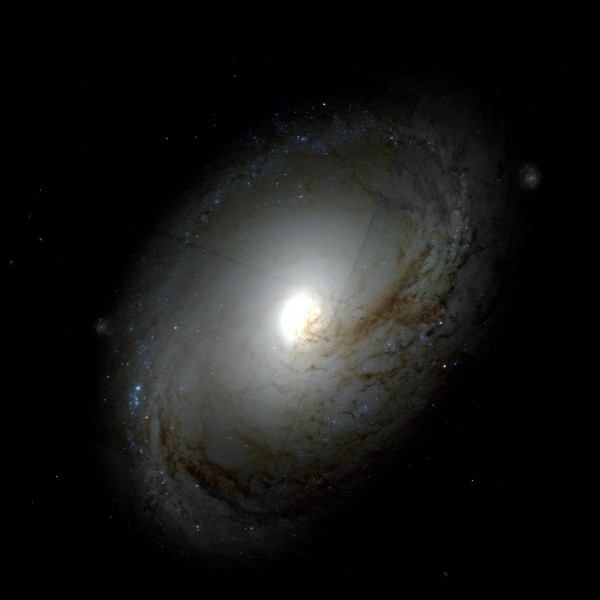 By measuring variable stars directly in M96, they were able to determine that this galaxy is about 36.5 million light years away, with an uncertainty of only about 3 million light years, an improvement by about 80% over previous measurements. This means the galaxy you see above is around 66,000 light years in diameter, or about 2/3 the size of the Milky Way.

Still, this galaxy is doing something ours isn't, as some spectacular images bring out. 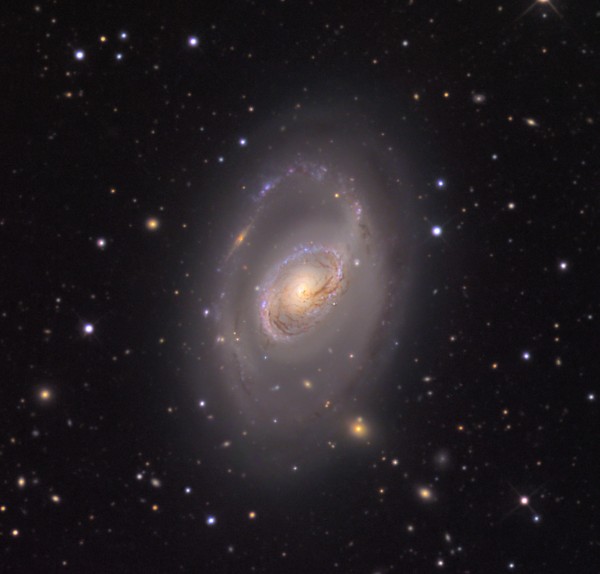 There are much fainter, extended outer arms that extend more than 100,000 light-years in diameter, as well as the characteristic pink emission lines that indicate intense star formation along the brightest parts of the spiral arms. You can also see some prominent dust lanes and -- if you look carefully -- some smaller spiral and elliptical galaxies also present.

But what could be causing the intense star formation and extended outer arms? Quite simply: the gravitational interactions with the other galaxies in this group! 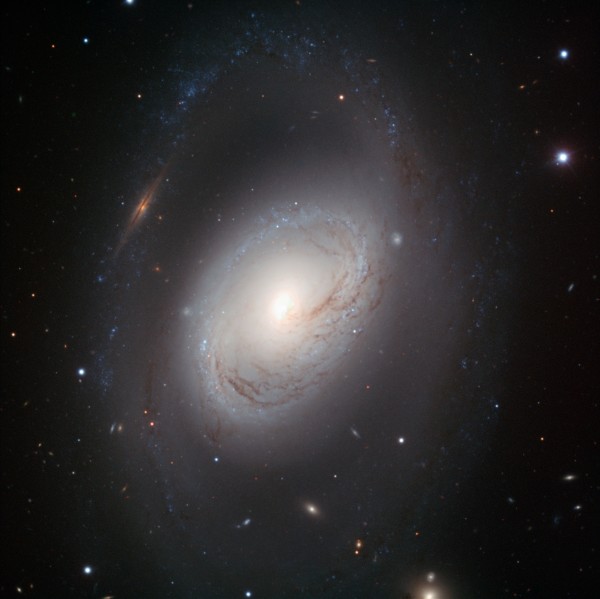 The other galaxies you see in this picture, above, are actually distant background galaxies from well outside the M96 group; the gravitational interactions causing these extended features, as well as the star formation and the asymmetrical dust distribution are most probably from the other major galaxies -- M95 and M105 -- in the group.

Even in the bright core of the galaxy, huge open clusters, asymmetric dust lanes and star-forming regions are clearly visible. 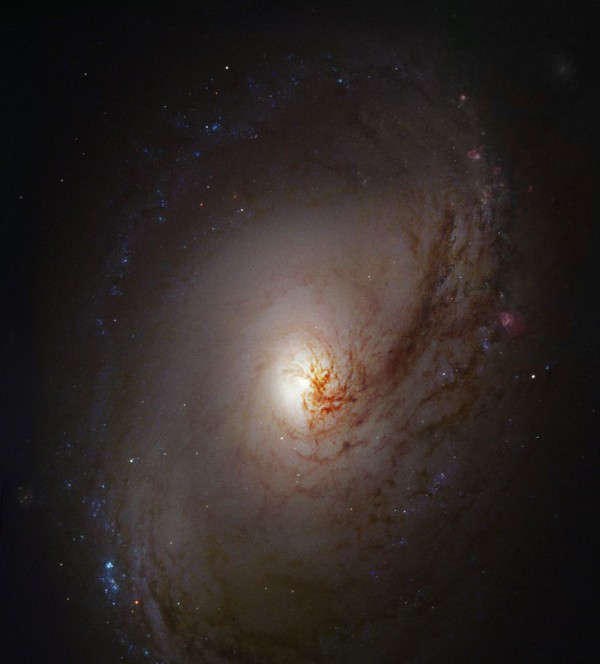 There's definitely a supermassive black hole at the center of this one, although its mass is highly uncertain, and there was a supernova observed here very recently: in 1998. (Although usually supernovae are Type II, particularly in galaxies undergoing intense bursts of star formation, and this one -- SN 1998bu -- was a Type Ia. The Universe is full of surprises!)

The Hubble Space Telescope has actually looked at this galaxy a number of times, although a professionally processed image has never been released. So I went to the Hubble Legacy Archive myself, and pulled out the best image I could find, and here's what I managed to create! (As always, click for an even higher-resolution version!)

I really love how the young, bright blue stars shine through along one of the major spiral arms in this version, and I hope you get a chance to enjoy this midnight wonder of the new year's sky! So that will wrap up the year's final Messier Monday, and I truly hope you've enjoyed it! Including today, we’ve looked at the following Messier objects:

I'd tell you to come back next week, but you'd be better off coming back sooner than that, because there's a big announcement coming for the new year, and I don't want you to miss any of the joy and wonder that the Universe has to share with you! Happy new year one and all, and I'll see you again very soon!

It's about 1:00 am here in northeastern Minnesota and stepping outdoors to contemplate shining objects in the sky right now would be too dangerous to risk because it's -35 degrees on the other side of my door. That's about what it's been for the past couple of nights, and that's about what's predicted for the next couple, too. I'll content myself with the words and images you've posted here. Thanks! :-)

I took the liberty to post-process your composition from hubble archive. Hope you don't mind. Free to use it since it's yours :) I just gave it a face lift ;) The details are enhanced, noise reduces, colors corrected and haze reduced also.