“Some day I hope to meet you. When that happens you’ll need a new nose, a lot of beefsteak for black eyes, and perhaps a supporter below!” -Harry Truman, to a music critic who panned his daughter’s singing

When you think about the Messier objects in the night sky, you hope for skies like the ones coming up over the next few days. The Virgo cluster and a slew of deep-sky objects rise in the east in the early part of the night, a waning Moon that won't rise until after midnight holds the potential for excellent deep-sky seeing, and the 40 galaxies that make up the 110 objects of the Messier catalogue become a real possibility. 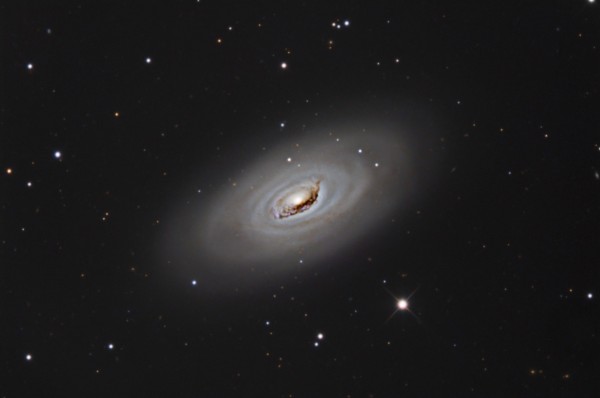 Well, today's object is a uniquely-darkened spiral galaxy, and it's one of the most unusual sights in the night sky.

But just what is it that gives it it’s one-of-a-kind appearance?

[Read the full story at Starts With A Bang over on Medium, then come back here and let us know your thoughts in the comments!]

At first, this reminded me of the days (a long, long time ago) of making optical flats. Counting the number of interference fringes against a reference flat would yield the wavelength (or part thereof) of inaccuracy or otherwise.
The next thought was 'what would a black hole eating another black hole reveal?'. Leftover regurgitation?

I tend to agree with the merger idea. It would appear the lesser galaxy is making its way through the centre (thereabouts) of the greater one. Perhaps we are seeing the trailing side of the smaller, hence the lack of stars around the nearside.
There appears to be a difference in the plane angle of the two bodies (perhaps 25 to 35 degrees) which could help to explain the observation.
The far side, I would imagine, would show considerable distortion from the effects of gravity and the velocity of the penetration.