“Studying whether there’s life on Mars or studying how the universe began, there’s something magical about pushing back the frontiers of knowledge. That’s something that is almost part of being human, and I’m certain that will continue.” -Sally Ride

When you travel some hundred-million kilometers through space to land, softly, on another world, you deserve a little bit of credit. The Mars Curiosity Rover has lived up to its hype and its expectations since its 2012 landing, and has responded with not only some remarkable science, but perhaps the best images of the Red Planet's surface ever taken. 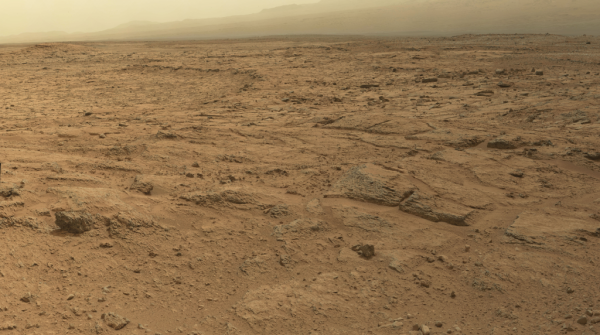 In addition to the panoramas, the soil analysis and all that we've learned, some very clever equipment and techniques have enabled Curiosity to photograph itself, producing a unique view never before seen on another world. 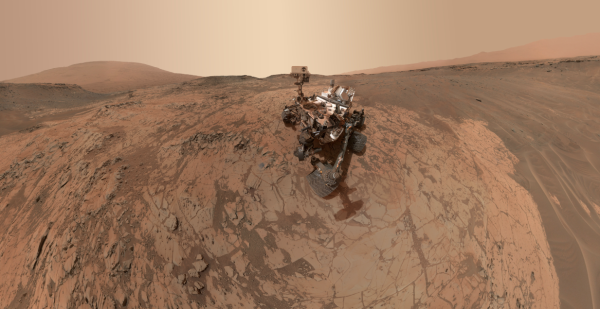 Go get the whole story in images (with a few words) on today's Mostly Mute Monday!

The Wile E Coyote landing was amazing. Kudos to ACME, but to this day the design decision on the wheels is hard for me to wrap my head around. Before Curiosity was ever packaged up for launch, they knew the wheel design was not good. Even Scarecrow, a testing version of Curiosity stripped down to only the drivetrain, was shredding these wheels.

What's with the haze in the background?

I assume they stripped down the testing rover to an equivalent weight, similar to what would be experienced on Mars.

And for testing, I assume they would do extreme testing of the wheels to find out the limits. Even if they knew the wheels were fragile when before they launched, it may have been to late to do change them out.

So they've done their best to cope, and ... hopefully designed better wheels for the next trip.

Mobius, I doubt that deniers' head-wrapping failure wasn't ever going to be a feature of their production metrics.

He thinks that the Road Runner cartoons were documentaries for a start.

They are indeed designing better wheels for the 2020 Mars Rover. Contrary to the opinion of @Ethan on the subject, the NASA Test Team has admitted this was a failure on their part.

Virtually every other component on the rover was tested under conditions far more rigorous than the rover would experience in the interests of getting the failure rate as low as possible. Not so with the wheels. They de-weighted the rover so the force on the wheels was equivalent, drove it short of the distance the real rover was to drive, and over terrain that was not more harsh than Mars' "sharper-than-expected" rocks. Even in their crippled testing regime, the wheels were destroyed.

If it was too late to change the design, why spend the money on testing at all? Now the rest of the teams gets to drive the rover backwards and compensate for the failure of the wheel test team.

"They are indeed designing better wheels for the 2020 Mars Rover. Contrary to the opinion of @Ethan on the subject, the NASA Test Team has admitted this was a failure on their part."

Clicking on the first link does not support your claim in the second sentence.

Nowhere else do you have support for that claim.

Your claim before was ALSO proven with actual quotes and evidence as having been 100% in contrary to fact.

Despite your claims for veracity, you have failed on every turn. This does not fill me with confidence that you happen to be right this one time.

Yet still you proclaim with confident authority.

"The long drive and sharper-than-expected rocks have pummeled the thin aluminum sheeting on Curiosity’s wheels, tearing huge holes; engineers are testing new designs and new materials in hopes of keeping the 2020 rover from suffering the same problem."

Yup. And where do "the NASA Test Team has admitted this was a failure on their part.”?

Curiosity is what? Stranded? Unable to move? Broken beyond all use?

So what failure? Where is the admission?

My original information came from a conference call / online presentation, but the same information is in this article:

"We misunderstood what Mars was. Strongly cemented ventifacts are not something that we saw on Mars before. There are [places] on Earth that do have these sharp ventifacts, but we hadn't seen them on Mars and we didn't test against them"

"My original information came from a conference call / online presentation,"

But your newest attempt is also not where “the NASA Test Team has admitted this was a failure on their part.”.

You're not really doing well on your claims here, are you.

Though you're doing better than SN.