Ask Ethan #102: Is Everything In The Universe The Same Age? (Synopsis)

It's been 13.8 billion years since the Big Bang for us, and when we look out at a distant object in the Universe, we're seeing it as it was in the past. Its age -- as it appears -- is determined only by how long the light took for it to travel from that object to our eyes, but to someone living there, it will also appear that the Universe is 13.8 billion years old. 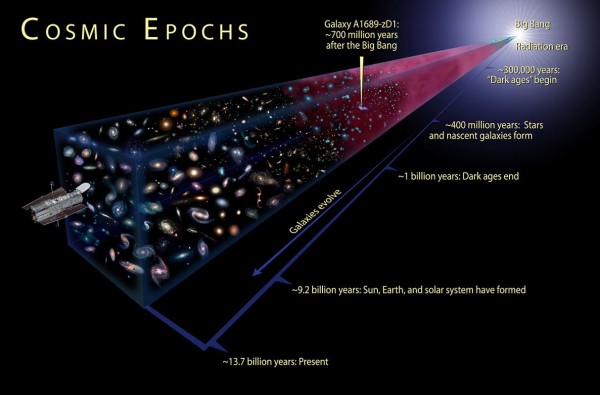 Image credit: NASA, ESA, and A. Feild (STScI), via http://www.spacetelescope.org/images/heic0805c/.

But it is actually possible for an observer living on another planet, star or galaxy to perceive that significantly less time has passed since the Big Bang, so long as they were moving close to the speed of light relative to the CMB. Paradoxically, if they slowed their speed, they'd find that they themselves were very young, but living in a 13.8 billion year-old Universe. 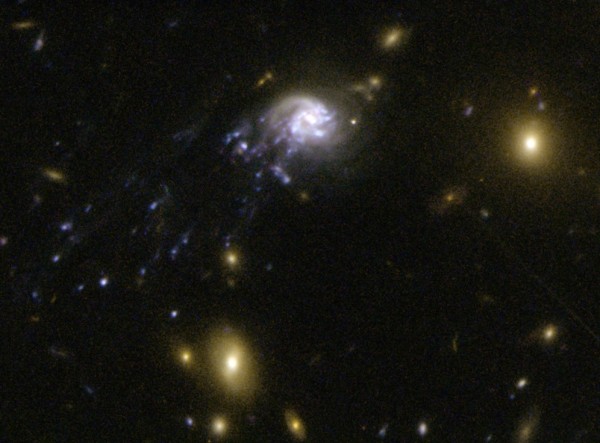 Come find out how on this week's Ask Ethan!

what I find fascinating and bizzare at the same time is if you view it from a POV of a photon being created i.e at CMB time and traveling through spacetime.. is that photon will colide with things that don't yet exist in his timeline.. i.e. with a gold atom created in star cores which is 2 billion years in the future from a photon's clock.. in photon's reference that star hasn't even been born.. yet in some other reference frame you could observe that photon hiting that gold atom somewhere in space. If photon could think, what would he say? what the hell did I just hit? where did this atom come from??

The photon itself, as with every other process, doesn't bother with a model. It just "lives its life according to its own principles".

I suppose you could say your issue starts with the statement "things that don’t yet exist in his timeline". It's a classical view that doesn't mean anything outside that very limited model. The gold atom the photon interacts with IS in its timeline and exists at the time it is absorbed. That atom may have been in existence an arbitrary length of time before that, but there's nothing different between it existing and not existing before the event that is the causal link.

To the photon, it exists exactly where it gets absorbed and never existed before (the photon didn't). Nor exists afterward (the photon doesn't).

While technically correct, such an accelerated galaxy is extremely unlikely. Typical velocity dispersions wrt the CMB even near galaxy clusters are ~1000 km/s, so the chance of a galaxy being accelerated to those large speeds are so small that none of the galaxies in the observable universe would ever be accelerated to such a high speed. However, depending on when the first civilization developed, a single (or a few) observers may have developed technology to accelerate themselves to such high speeds, in which case (for them) the universe could appear to be significantly younger.

I'm not sure that Ethan's answer address the question. Certainly all regions of the universe are about the same age, but what about local variations. General Relativity says that anything undergoing acceleration or deep in a gravity well experiences time more slowly. Would't something that's been orbiting one of the first black holes to form have experienced much less time than us?

Ethan, as I understand it, it is meaningless to talk about everything being the "same age" because in relativistic space-time there is no universal "now". For any observer, you have to specify at what point in 4-dimensional space time you want to ask him how old he sees the Universe as being, but that would be like asking "how old is the Universe for someone who lives on Earth in Solar System in the Milky Way, in the year 13,800,000 after BB?" I.e. the question would contain the answer.

I'm not smart enough to reason through your supposed paradox of the observer moving at relativistic speeds seeing the rest of the Universe as being older than the part he is in, but I'm sure it'll go away if you analyze it. And aren't you trying to make an "ether" out of the CMB? Relativity says there is no privileged frame of reference.

@Juergen Boltz #7: Your reasoning is correct, but incomplete. In general, especially when you are "matching" multiple local metrics with bounary conditions (e.g., the Earth's gravity well with the Moon's, with the Sun's, with the local neighborhood, etc.) you can't define any common time in GR. However, cosmologically with ignore all of those small local variations and treat everything with a single solution -- the Friedman-Lemaitre-Robertson-Walker metric for an expanding universe. With that single metric, you can define a global "time", which is really just the parameter used to define the scale factor for exapansion.

The CMB does not define a "privileged" reference frame. That term, in the context of relativistic pedagogy, refers to a special or unique reference frame which defines the physics, with the implication that all other moving frames do _not_ properly define the physics. There is no such special frame in relativity -- the physics is defined, and identical, in every frame, and the rules of SR and GR tell you how to do the coordinate transformations to compute the same physics between different frames.

What the CMB does provide is a _common_ reference frame which all observers can agree upon. We could, for example, send a message from here to a civilization in M87, and tell them that we observe the CMB with a temperature of 2.726 K (using a temperature scale defined by some physical constant, say multiples of the Boltzmann constant) with a dipole of ~600 km/s (expressed as a temperature, which I just don't recall right now) in a given direction (specified, for example, using some set of quasar spectra). With that information, the M87 civilization could compare their motion through the CMB with ours, as well as our relative "cosmic times" of observation (since the CMB is slowly cooling). But both of us have the same local physics.

You are correct, of course, that the age we are talking about, is the age for an observer with the Universe.

But talking about the observer from outside is nonsensical because what is "outside" is not even theory but you choosing any number of conditions ad hoc, to define what outside is... if you choose the same physics (which you sort of must.. since that's the only one we can experience), then you end up being inside the universe.. if in=out.. they are same.

On the other hand.. what you can do is try to think in 5D.. and imagine a 4th spatial dimension and look at how universe evolves. That way, you do assume a role of an observer "outside" of 3D space.

Al human space talk start with a set mind of, in the beginning.
Age follows, with a end. No beginning do away with age an center of space. Opening up a much more fascinating space.
Living for ever as next mind set step.

Yes. In this Great Time, a great time being 311.04 trillion years, we are approx. 70 trillion years old.. in this Dern Universe. The Pleiadian Mission by Randolph Winters based on www.theyfly.com

Bas is either bad AI or a broken human brain.

Unable to tell which.

Mind you, I'm a little disappointed that nobody followed up with an "I'm not the same age. And neither is my wife!".

I thought Python would never die...