"This is in a real sense the capstone of the initial missions to explore the planets. Pluto, its moons and this part of the solar system are such mysteries that New Horizons will rewrite all of the textbooks." -Alan Stern

The New Horizons mission surprised everyone last July when it revealed Pluto to be a world that varied significantly in both terrain and color. Instead of a uniform, reddish-hued icy world, it was revealed to have mountains, craters, smooth plains, pitted regions and more, which range in color from white to yellow to deep red. 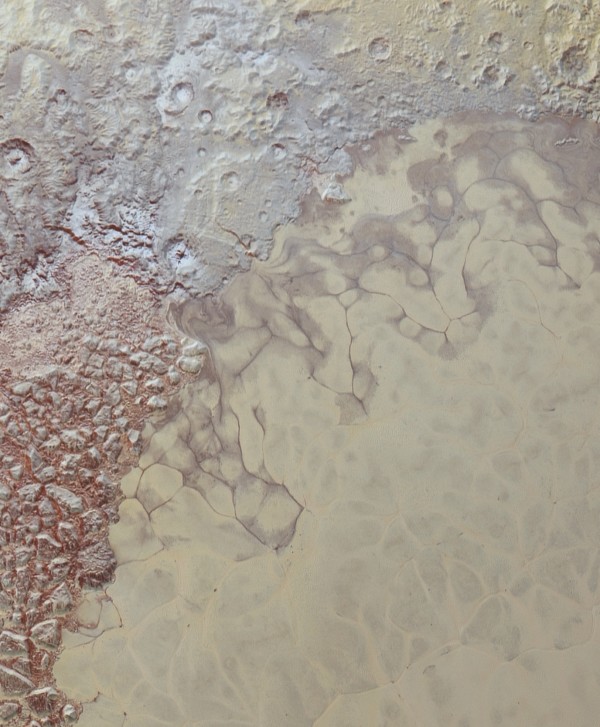 Image credit: NASA/JHUAPL/SwRI, of the interface between the heart-shaped region (lower right) and the mountainous terrain (upper left) that show severe color differences as well.

This was initially a mystery, but subsequent analysis has revealed that Pluto's atmosphere and outer surface consists of a great many volatile molecules, including water, nitrogen and methane. While water ice and nitrogen ice simply sublimate, methane undergoes a complex interaction with ultraviolet light, resulting in the production of tholins, which turn the surface red where they're deposited. 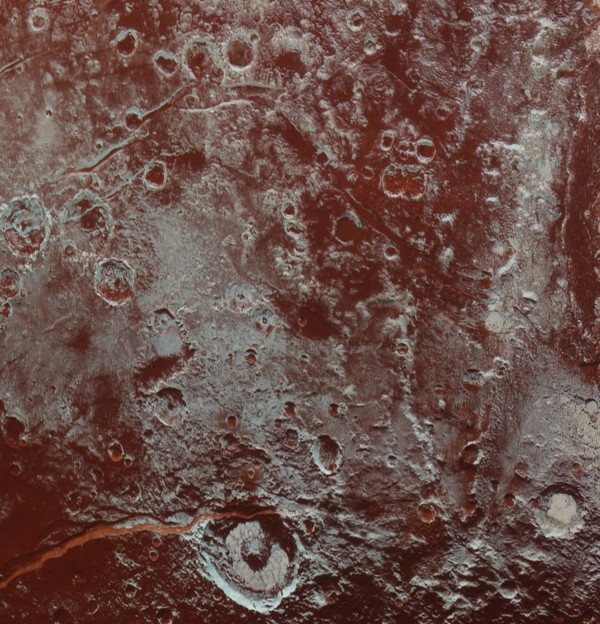 Image credit: NASA/JHUAPL/SwRI, of the color variations revealed in the complexity-laden craters of Pluto's mountains.

The story is still unfolding, but freshly snow-capped regions and pictures of the entire world support this idea. Go get the whole story in a myriad of pictures and no more than 200 words on today's Mostly Mute Monday!

Why Are Pluto And Charon So Different? (Synopsis)

“Just as a Chihuahua is still a dog, these ice dwarfs are still planetary bodies. The misfit becomes the average. The Pluto-like objects are more typical in our solar system than the nearby planets we first knew.” -Alan Stern When New Horizons approached the Pluto system last year, it discovered…

“It used to be that Pluto was a misfit. Now it turns out that Earth is the misfit. Most planets in the solar system look like Pluto, and not like the terrestrial planets.” -Alan Stern The combination of New Horizons and Hubble to work together allow us to create the longest-baseline parallax images…

"We've learned that the view of four inner rocky planets and four outer gas giants and one misfit Pluto is wrong. Now we understand Pluto's context." -Alan Stern After a 9 year journey to Pluto, NASA's New Horizons spacecraft made its closest approach to Pluto this past July, taking so much data…

"We really expect the mission to be transformational. This is the capstone of the original visits to the planets. It takes us 4 billion miles away and 4 billion years back in time." -Alan Stern When the Hubble Space Telescope discovered additional moons of Pluto, beyond Charon, it was speculated…

The probe sent to Pluto recently has shown that there is a tremendous amount of heat coming from the interior of Pluto and its small satellite; so much so, that the surface of Pluto is continually resurfaced by the eruption of ice from the interior of Pluto. Also there is a constant replenishment of the nitrogen atmosphere of Pluto from the interior.The standard causes given for planetary heat production in the core does not apply, that being heat from the sun, radioactive decay, and friction caused by tidal stretching. Furthermore, there is evidence that other smaller free standing bodies in the Kuiper belt sometimes called the Edgeworth–Kuiper belt, are at the far edge of the solar system are producing their own internal heat inside their cores. Although to date most KBOs still appear spectrally featureless due to their faintness, there have been a number of successes in determining their composition. In 1996, Robert H. Brown et al. obtained spectroscopic data on the KBO 1993 SC, revealing its surface composition to be markedly similar to that of Pluto, as well as Neptune's moon Triton, possessing large amounts of methane ice.Water ice has been detected in several the Kuiper belt objects (KBO)s, including 1996 TO66, 38628 Huya and 20000 Varuna. In 2004, Mike Brown et al. determined the existence of crystalline water ice and ammonia hydrateon one of the largest known KBOs, 50000 Quaoar. Both of these substances would have been destroyed over the age of the Solar System, suggesting that Quaoar had been recently resurfaced, either by unexplained internal tectonic activity or by meteorite impacts.

Where is this tiny body getting its internal heat from?!?!?

LENR is a scam. Sorry, I know this interrupts your advert and disrupts your attempt to sell stock, but it's completely and 100% irrelevant to Pluto and a criminal con.

'by the eruption of ice from the interior of Pluto'

Wow, Bri, do you ever do anything yourself?

Where could the heat be coming from inside Pluto?

"Among the more puzzling features are the two tall mounds with central depressions that look like volcanoes," says Ross Beyer, Senior Scientist at the SETI Institute. "Wright Mons is about 2 miles tall and 90 miles wide, and Piccard Mons is even larger, about 3.5 miles tall and 140 miles across. They could be ice volcanoes, but this will take more analysis to establish."