“[The black hole] teaches us that space can be crumpled like a piece of paper into an infinitesimal dot, that time can be extinguished like a blown-out flame, and that the laws of physics that we regard as ‘sacred,’ as immutable, are anything but.” -John Wheeler

Dark matter is one of the biggest mysteries in the Universe. We can feel its gravitation, we can see its effects on galaxies, clusters and the large-scale structure of the Universe. But when it comes to very small scales, we haven't been able to detect dark matter, either directly or indirectly, leading us to wonder at what it's mysterious nature might be. 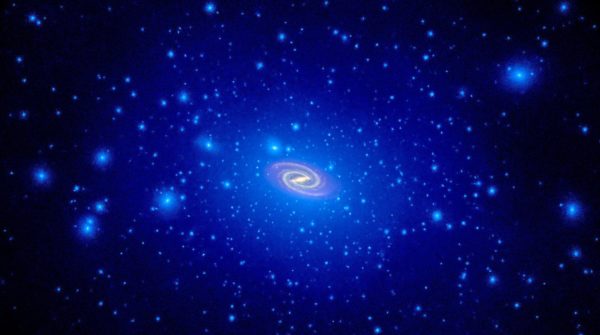 Illustration of a clumpy dark matter halo around the baryons in a galaxy. Image credit: NASA, ESA, and T. Brown and J. Tumlinson (STScI). 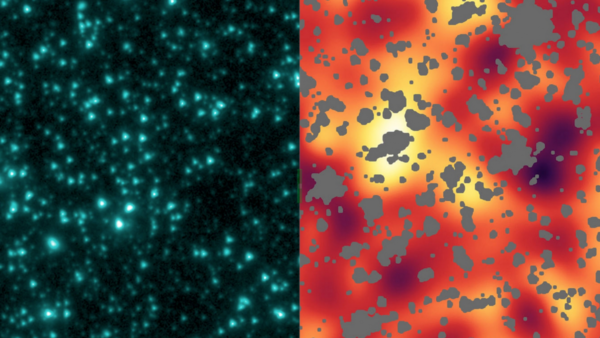 The answer is almost definitely "no," and I've got the scoop as to why!

Thanks, I had been wanting to ask about this. You seem to have covered it well.

“Wherever you were located, gravitation would try to pull nearby masses towards you, while the radiation pressure from photons would try to push those masses back apart.”

Radiation pressure from photons, as in LIGHT, pushes the masses apart?
And yet I’ve read that the DARK (energy) is believed to be involved in pushing the masses apart, as in causing the universe to expand. For example: http://www.universetoday.com/116229/whats-causing-the-universe-to-expan…

So, both Light and “Dark” push those masses apart?

The inadequacies of the English language don't constrain reality. By your lights, the statement "I left my coat on the right-hand side of the car" is also self-contradictory or meaningless, and a New York City museum moonlights as the British meteorological office, since they are both called "the Met." Also by that logic, the universe must be both orderly and beautiful because the Greek word κοσμοσ means any of "orderly arrangement," "adornment," or "universe."

Give him some credit, V. It was only about a week ago that SN learned scientists use hyperbole. It may be a few more weeks before he figures out science makes use of similes, metaphors, and words with multiple meanings.

But that brings up an amusing anecdote. My grad school got rid of their second language requirement for science PhDs a few years before I went there. They used to have it so their scientists would be able to read the foreign literature. When I asked why they dropped it, the professor commented that not only was the vast majority of scientific literature now written in English, but even the documents that weren't often used so many 'directly translated' scientific terms and symbols that you could often get the gist of a published result even if you couldn't read the language. So I looked up an article on something I was studying at the time in German, and lo an behold, he was right. It was a struggle to translate gaschomatograpie back to gas chromatography and enthalpy back to enthalpy, but somehow, I managed it. :)

"Radiation pressure from photons, as in LIGHT, pushes the masses apart?"

Yes.vThat is why that was written. Not to make you fall knickers-in-the-air in surprise, but because it's a fact.

"So, both Light and “Dark” push those masses apart?"

No. That is some claim you have made up.

"When I asked why they dropped it"

They dropped it for the same reason they dropped maths or science for BAs.

Because it cut down on the intake and grades of graduates.

My theory of black holes are if they consume light,gasses,radiation and so forth and break all these down to atoms and particles, wouldnt all three forces be present ie: weak force,strong forca and electromatic force all being forced into a funnel of spacetime to emerge and create a big bang for another deminsion?