The least likely record to fall this Olympics, and beyond (Synopsis)

"A lot of legends, a lot of people, have come before me. But this is my time." -Usain Bolt

The Olympics is an incredible time for athletes in all sports, and a time to celebrate the fastest, strongest, most agile, and all the other superlative achievements the human body is capable of. Yet for those of you hoping for a new record-breaking performance in the men’s 100 meters, I’ve got bad news: it’s extraordinarily unlikely. 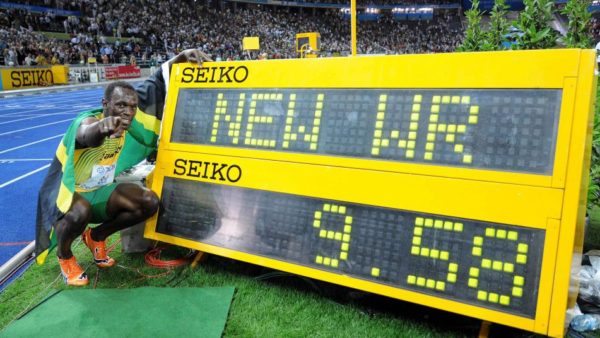 Usain Bolt is an athlete whose prowess and performances shouldn’t be occurring for another generation, and here he still is at the age of 29, competing at the highest levels and going for an unprecedented third straight triple: in the 100 meters, 200 meters and the 4x100 meter relay. Could he achieve his own version of what Carl Lewis did a generation ago, when he broke the 100m world record at the age of 30? 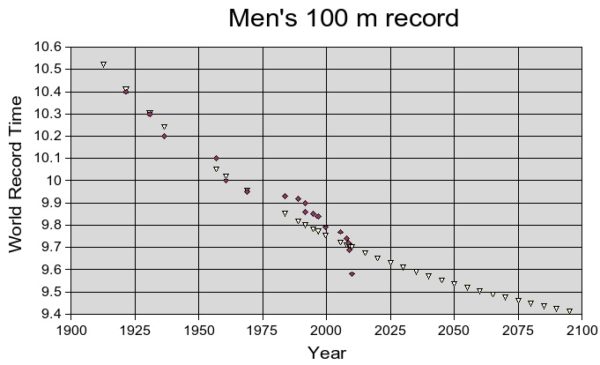 Not only wouldn’t I bet on it, I’d bet against anyone else coming close to Bolt’s incredible 9.58s. Not just in this Olympics, but for the next 20 years.

“The ULTIMATE time that human males should be able to reach in the 100m dash is somewhere around the 9.2s mark, based on their performance to date.”

So, you do NOT think human males could reach, say, 4.1s, *millions of years* from now?

I don’t either.
The reason I don’t has something to do with why I don’t buy evolution.
You might say it has to do with limits, and stasis.

I am interested to see what Trayvon Bromell does. He's supposedly been dealing with a nagging sprain so may not be 100%, but last year he ran a 9.84 at the USA Track and Field Outdoor Championships. He was 19 years old at the time. Sprinters usually peak in their 20's. By comparison, Bolt never broke 10 seconds before turning 20, nor did dopers Asafa Powell, Tyson Gay, or Justin Gatlin. When healthy the kid is fast.

Speaking of Justin Gatlin, did you know he once ran a 9.45?

Based on that (and your "I'll believe in evolution when one type of animal gives birth to a different type of animal, as evolution says must happen" comment from the past), in addition to your comment being unrelated to the post, the real reason you don't believe it is that you are an idiot.

I'm skeptical of putting to much emphasis on the extension of the model so far into the future Ethan. This exponential fit is, at its core, a statistical fit, and I'm sure you know of the dangers of extrapolating regression-type fits of any kind beyond the extent of current data. I have no disagreement with saying we're approaching the limit of human performance. Can't take the time predictions as much more than guesswork.

The problem may be in the fact that tall slender kids won't have any succes in doing sprints, and so they are eliminated early out of competition being less motivated, and Usain Bold is an exeption thanks to the popularity of sprinting in Jamaica. It are his long steps that make all the difference. Sprinting isn't everywhere a popular sport vs. Jamaica where youth races are on television.

If we would be patient and let kids sprint once they are more fully developped then there might be more tall kids with the same physicalities as Usain and the record could be challenged.

BTW I guess you also need some kind of ADHD like Michael Phelps that gives you a natural boost of energy and tension and restlessness, making your muscles and reactions quicker. 'Normal people' are too relaxed.

I am very skeptical about predictions for human performance. We aren't like other animals - we are becoming able to design changes in ourselves.

If enough of us wanted (e.g. an organization like China), in time we might have 4 legs and run as fast as a Cheetah.

The problem may be in the fact that tall slender kids won’t have any succes in doing sprints, and so they are eliminated early out of competition being less motivated

I don't think that is true at all. We have plenty of tall slender sprinters in the US. We call them wide receivers, and coming up they all ran track.

There are many more guys around 6 feet tall that are even faster than Moss and Megatron, but none of them are faster that Usain Bolt. We have plenty of tall, fast athletes receiving the level of training that allows Americans to dominate at the Olympics, but we simply don't have someone of Bolt's talent.

Denier@7:
Off topic from Ethan's post, but earlier this year there was a story about Johnson and his retirement from the Lions. Most of it was his detailing the toll football had taken on his body - he "had more concussions than he could remember", and he detailed the struggle he had simply getting up out of bed some mornings. Really sad.

I played, brother played, Dad played. I have season tickets to SDSU Aztecs Football (we should have a great year) and closely follow the athletes. I love the sport, but participation in football has been completely taken off the table for my kid. Head trauma is something you don't mess with.

Head trauma is something you don’t mess with.

I did photography for the tee-ball and Little League teams my younger son played on, and for teams coached by friends, and then again for high school baseball, and so knew many parents who had sons the same age as mine and older. Over the years a good percentage of the families in which older boys had played football held boys the age of my son out from doing so, saying it wasn't worth the risk. Much different than it was 40+ years ago when I was in high school. (My son has never been interested in football, so it wasn't an issue.)

You could be right.

But do note that in football slender kids might have early success as they are taller to catch the ball, so it's not pure running. Next to that they might have trained other muscles differently, posture. When it come to this level it are the tiny details that start making the difference. Who knows enhancers might have been used to gain muscle volume. Motivation.

Nonetheless he's an amazing athlete, I've once met him in person and shook his hand, the man is full of energy.

I also forgot to mention relaxation, just like how big cats are super lazy most of the times. Only sort burst of energy. Sprinters don't train that much vs. football players.

Did he ever claim man would? If not, why did you ask this question?

"The reason I don’t has something to do with why I don’t buy evolution."

Yeah, how? Since you didn't believe 4.1s based on nobody else claiming it, how the hell does that correlate with your insanity that denies reality?

I wouldn't bet against Bolt beating his own record. Watching him in the Olympics, it seemed to me that he doesn't even bother to run full speed in the qualifying races. He just gets out in front, then looks back and keeps a pace that will prevent other runners from winning that qualifier. Now, I'm not ragging on him; it's a very good long term strategy which probably helps him to stay ready for the finals. But if you think about his "trying his hardest" time results as being a distribution centered on some average time, with the WR being the left-most 'tail' point, and then think about the fact that he could easily triple or quadruple the number of points in that distribution if he chose to.... well, I bet if he did that, the left-most point would move left some more. :)

"I am very skeptical about predictions for human performance. We aren’t like other animals – we are becoming able to design changes in ourselves"

Surely that makes it EASIER to predict? After all, random chance is quite unpredictable, but deliberate messing about with things is much easier to predict.