"Even with all the collected data we cannot say with 100% certainty that the ASASSN-15lh event was a tidal disruption event. But it is by far the most likely explanation." -Giorgos Leloudas

Last year, a record-shattering event occurred: we saw the brightest supernova ever observed in the Universe. It outshone the previous record holder by more than double, and it reached a peak brightness of more than 20 times the sum total of all the stars in the Milky Way galaxy. Surprisingly, it occurred in a red, quiet galaxy, rather than the bright blue ones famous for them. After 10 months of follow-up observations, it looks like it wasn't a supernova after all. 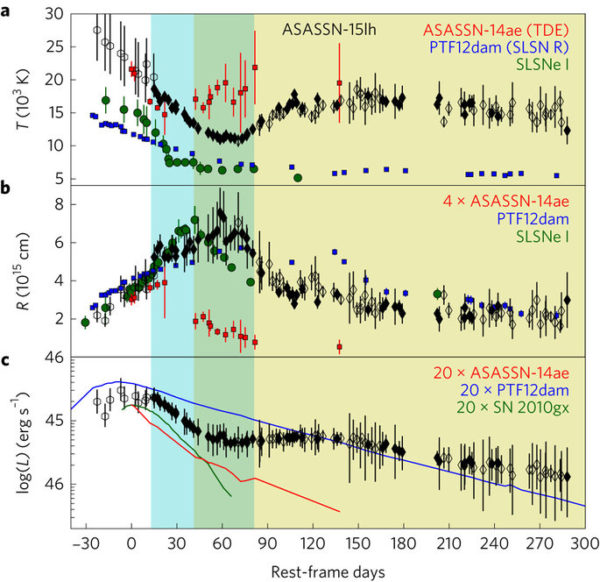 The increase in temperature (top graph) and the re-brightening (bottom) when all other supernovae fail to show these features indicate that tidal disruption, not core collapse, is likely at play here. Image credit: G. Leloudas et al., Nature Astronomy 1, Article number: 0002 (2016).

Instead of fading away, there was a rebrightening months after the peak. Instead of cooling down, something reheated the glow to even greater temperatures. The only thing that fits the data? A tidal disruption event, and even those would only work if it were a supermassive black hole that rotated more quickly than any such event ever observed before. 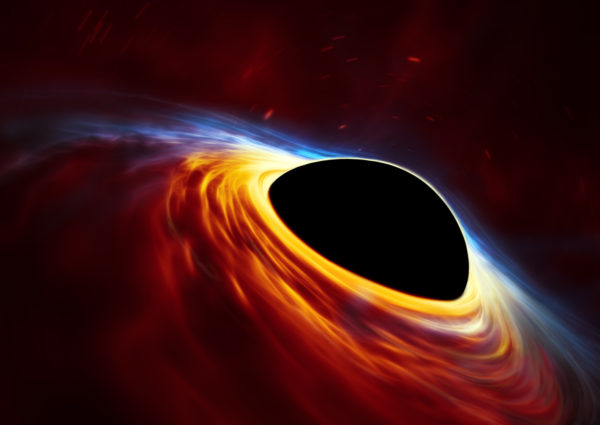 This artist’s impression depicts a rapidly spinning supermassive black hole surrounded by an accretion disc. A tidally disrupted star may be responsible for the matter, and for the luminous emissions that result. Image credit: ESA/Hubble, ESO, M. Kornmesser.

Come get the full spectacular story -- and the science behind it -- as we finally learn where the brightest event in history came from!

More energy, Denier. Brightness is in w/m^2, and all stars are apparent as point sources so the size of the object is irrelevant.

Radiance (or radiant intensity) is the power per unit angle, and is pretty much the same as brightness for point sources, whilst luminosity is the total power output.

It wouldn't matter if it was lensing because it's still a point source. Only a lensing object between us would cause brightness to increase from that lensing.

Go watch Cosmos (Sagan). He has the instrument that Huygens used to determine the distance to the star Sirius (which was wrong because nobody knew that stars had different luminosities). It's a disk with holes of different sizes drilled in it, and Huygens looked at the sun in daytime (duh) and looked through each small hole until he got a view that appeared as bright as Sirius.

He then worked out how much less of the sun's disk that was, and that ratio was the relative distances between us and either star. About half a light year, IIRC, but Sirius is inherently a brighter star than our sun. Correcting for that and he was very close to 8 light years.

An amazing example of his memory. But also illustrates what brightness inherently is: how much of the star's light reaches our eyeball. The size of the source (if pointlike) is irrelevant.

Only a lensing object between us would cause brightness to increase from that lensing.

A Super Massive Black Hole is a lensing object and unless the plane of infall was perpendicular to our line of sight it would have been us the the doomed star at least a portion of the time, hence the question.

"A Super Massive Black Hole is a lensing object"

But being the same one that did the eating, it isn't between us and itself.

@Denier #4: You should probably be able to work out the optics yourself; you can safely approximate a gravitational lens just like a regular optical lens. That should allow you to figure out why your model is wrong.

There are two problems. First, even if "a portion of the time" were true, that would introduce an obvious oscillation to the light curve, in contradiction to observations.

Second, gravitational lensing works due to path length and path angle differences. When the target object is too close to the lens, you don't get the multiple paths necessary for magnification. Consider what happens if you put a small object right up against the glass of a hand magnifer: it doesn't look bigger. You have to move the object back, away from the lens, at which point the varying path lengths become effective at magnifying.

gravitational lensing works due to path length and path angle differences. When the target object is too close to the lens, you don’t get the multiple paths necessary for magnification. Consider what happens if you put a small object right up against the glass of a hand magnifer: it doesn’t look bigger.

It only works that way when the curvature is slight. Hand magnifiers with the object held back a distance will only get you 10x whereas the extreme curvature of the tiny glass bead used in the Leeuwenhoek glass-bead microscopes of the 1500's let scientists make out cellular structure. The extreme magnification was achieved with the glass bead virtually on top of the subject.

The optics around a black hole was mathematically rendered for the movie Interstellar and even the light of the inner edge of the accretion disc had multiple paths. As with the Leeuwenhoek glass-bead microscopes, I wondered if the close proximity to the extremely curved space around a SMBH served to boost the magnification far beyond what we experience with other far more tame examples of gravitational lensing.

As for the oscillation of the light curve I admit that I don't have an answer for that. I suppose the star could have fallen directly into the SMBH from the backside without orbiting and the event was a spaghetification nova.

In the end, I was just curious as to why a star being ripped apart would be so much brighter than one going nova via collapse.

There are two problems. First, even if “a portion of the time” were true, that would introduce an obvious oscillation to the light curve, in contradiction to observations.

Actually, isn't there an oscillation? I thought that's what we were supposed to read from both the figure, the simulation, and the figure text's discussion of 'rebrightening.' It doesn't appear, however, to be very pronounced, and it looks ilke it only happens once (while the simulation shows many many orbits).

all stars are apparent as point sources so the size of the object is irrelevant.

One thing I found interesting about the simulation is just how quickly in the in-fall process the star's material goes from a point to a (curved) line. Seems to happen after just one pass around the BH, with all the other remaining passes consisting of a long streamer of star material.

Actually now that I think about it, the star turning from a point source into a long streamer of gas with some mass distribution around its original position would explain why the apparent 'rebrightening' has a longer slower oscillation, rather than a narrow, high intensity one matching the orbital frequency of the star around the BH.

@eric #8: Your last paragraph is the correct one: the rebrightening is due to the "second pass" infall of gas stripped from the star during its initial tidal disruption (the comet Shoemaker-Levy 9 is a good analogy). The "oscillation" I was talking about would be a (not observed) periodic brightening and dimming of the light curve itself, due to orbiting around the BH.