"Every philosophy also conceals a philosophy; every opinion is also a hideout, every word also a mask." -Friedrich Nietzsche

If you want to see all the way back to the Big Bang -- to the cosmic microwave background -- that means looking back through billions of light years worth of space. While individual point sources like stars and distant galaxies are relatively easy to exclude, the most catastrophic interfering factor is the Milky Way itself. Gas, dust, spinning molecules, magnetic fields, stars and more are all known to play a role. 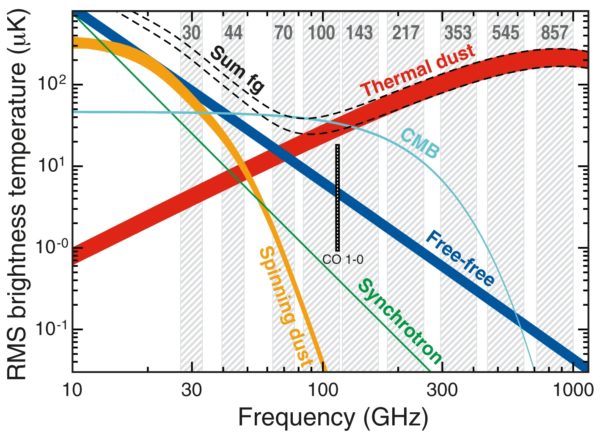 The current models of galactic (and other) foregrounds along with the cosmic microwave background. The latest results indicate that free-free scattering (from free electrons) has been modeled insufficiently. Image credit: ESA and the Planck Collaboration.

It turns out we might not have modeled the galaxy correctly after all, and this could mean everything for understanding what our Universe was truly like when it was first born!

5 Facts You Probably Don't Know About the Cosmic Microwave Background

"It is true that we are made of dust. And the world is also made of dust. But the dust has motes rising." -Muhammad Iqbal If you want to view the Milky Way in all its true splendor, you need to go beyond visible light, as the cosmic dust that gives rise to new stars also absorbs visible light,…

The Most Distant, Dark Galaxy Ever Found!

"One mustn't look at the abyss, because there is at the bottom an inexpressible charm which attracts us." -Gustave Flaubert The deepest depths of space, out beyond our atmosphere, our Solar System, and even our galaxy, hold the richness of the great Universe beyond. Stretching for billions of light…

Water vapor emits and absorbs very strongly at microwave band. How does water vapor cause problems for detecting microwaves?

The article below is from November 2007 prior to the ''cold electron' alignment found. The orthodoxy was quick to try to put out the fire. This could heat up again.

Interesting piece. Interesting to note they didn't manage to substract the anisotropies that apparently align the ecliptic with the largest and earliest structures in the universe.

On a related matter I think with the next big resolution hike (seeing further) just around the corner it is time to see people/theories predicting (or g gssing) what we're going to be seeing that we weren't expecting at all.

Orthodoxy is not a bad word and Science has
or is an orthodox authority which rejects bad theories or models.You can have the final word in your peer review.

But using the words "The Orthodoxy" is still the signal of a crank.

If the crank were not a crank and had good reason to believe their case, they would not have to call science "The Orthodoxy", being an ad hom attack and actually valueless in discussion about evidence.

Granted. Sometimes we say things because our lives are very busy and language is not always used correctly as things are on the fly. I am not a scientist and yes I am crankish in regard to subjects not an authority in. I was trying to convey that Verschuur and Schmelz' paper if true is very important. This could redefine the structure of the CMB map. In the end it will either be rejected or accepted by the steamroller known as Science.

"I was trying to convey that Verschuur and Schmelz’ paper if true is very important."

But there was no need to bring "Orthodoxy" into it. All you've managed to do is ensure nobody will bother to read your post or follow your link and wasted lots of time on something that you said and admit you don't know why.

And that last point is, I'm afraid, a killer, since your claims are self-admittedly based on a lack of knowledge, AND that you cannot think clearly.

When we add that to the fact your original post was almost as irrelevant to the subject as axil's incomprehensible post, I'm afraid you've sunk it.

Anyone reading it would have to set themselves up to

and, honestly, why would they want to? Most likely is you've either misrepresented or misunderstood the paper,and the end result is null.

Wow, I'm guessing you have a very high IQ (170 ?). Probably very good in math and physics. Do have any thoughts on the Verschuur/Schmelz paper? I will understand if do you do not want to waste time with someone as unknowledgable as myself.

No, MArk, I'm not going to bother because

a) you're a crackpot
b) there's nothing to discuss

You may as well ask me for my opinion of the pre-rapaelite period and its depiction of the idiomatic healthy human norm.

Even if I could converse on that sufficiently, it has nothing to do with this thread.

Moreover, there's no point, no purpose, no goal or end and no payoff for either of us to do so.

And it merely gives you cover to cuddle your dislike of science and your need to feel better than "experts" to pretend to be talking about science.

BTW, since the discussion would not rely on high IQ or any of that bullcrap, pretending soft soap on it is a waste of time and your effort, it means no more than to comment on my good cooking before asking me to explain some new scientist article.

I'm sorry your blood pressure went up. Relax.
I,m confused. I do not recall asking you to explain a new scientist article.

Just because you're upset that you aren't getting kindergarden today doesn't mean you get to pretend I'm angry.

And if you didn't want a paper in new scientist to be read to you, you shouldn't have linked to it.

But you're still a crackpot.

Throw off that massive chip on your shoulder and stop getting so uptight about it.