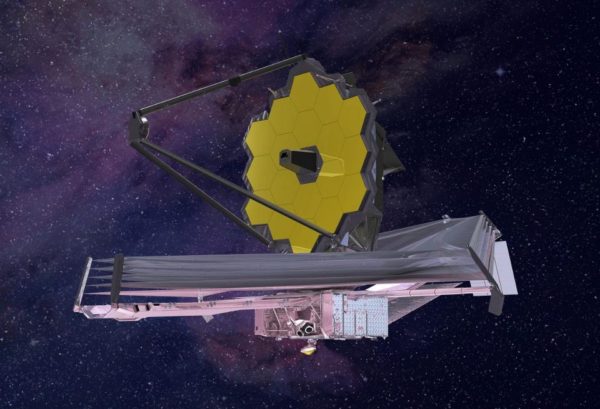 An artist's conception (2015) of what the James Webb Space Telescope will look like when complete and successfully deployed. Note the five-layer sunshield protecting the telescope from the heat of the Sun. Image credit: Northrop Grumman.

Scheduled for launch in October of next year, and right on track, James Webb is poised to revolutionize astronomy with as big a step forward from Hubble as Hubble was from ground-based telescopes. And best of all, scientist Amber Straughn will be giving a free, live-streamed public lecture on it that I’ll be live-blogging today, at 7 PM ET / 4 PM PT.

An illustration of CR7, the first galaxy detected that's thought to house Population III stars: the first stars ever formed in the Universe. JWST will reveal actual images of this galaxy and others like it. Image credit: ESO/M. Kornmesser.

Watch from anywhere in the world, or catch it at any point afterwards. It’s the future of astronomy, and it’s about to begin!

That was enjoyable. Dr. Straughn was clear and engaged throughout, and her review of the project included the latest developments, the invitation for requests for time after the JWST goes live. I think they’re due for submission the day after tomorrow.

It’s been a long time coming. Let us hope for a flawless deployment.

I have been waiting so eagerly for this launch event, complete with all of the magnificent things it would reveal. I was expecting this would be an unbelievable shift in my view of the universe.

Unfortunately I will not be here. I am laying in my new temporary hospital bed here at home, as cancer eats away at my body, with probably only a week or two to live.
----------------------------
Ethan, your explanations of the workings of the universe have been absolutely delightful. I cannot say how much this website has meant to me. Really!

I also want to thank you for the kind sentiments you expressed to me in the past when I was enduring totally unnecessary legal troubles. It was genuinely an uplift to receive your understanding comments.

The JWST has picked up a nice little article on the Beeb. http://www.bbc.com/news/science-environment-39420974.